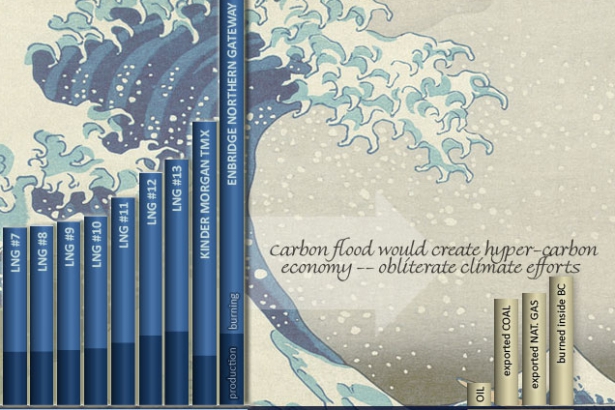 The fossil fuel industry is aggressively pushing for a 700% increase in the amount of climate pollution flowing through BC's economy. Seven times more fossil carbon in just a single decade.

As my chart below shows, eighteen fossil fuel mega-projects are currently proposed for BC. Twice as much coal. Ten times more fracked natural gas. Five times more tarsands. The resulting climate impact of this carbon tsunami could exceed 1,200 million tonnes of CO2 (MtCO2) per year. That's more than the climate pollution from all the coal, oil and natural gas burned by over two billion people living in 160 nations today.

It is absolutely, jaw-droppingly, immorally, out of control. 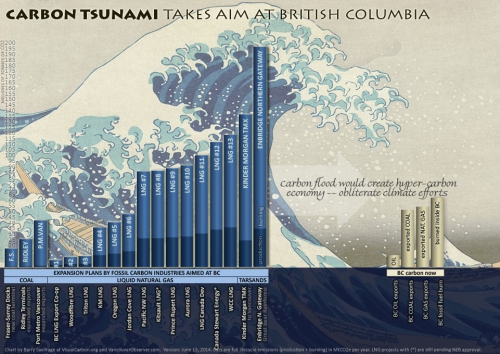 All efforts by British Columbians to create a sustainable, climate-safe economy would be obliterated by even a small fraction of this proposed carbon flood.

Currently the provincial economy has 40 tCO2 per British Columbian flowing through it -- in either burned or exported fossil fuels. The carbon tsunami aimed at BC would add up to 270 tCO2 more per person. It would make BC one of the world's climate-dirtiest economies per person. It would dwarf what Albertans are doing next door.

For those of us in BC that care about stopping the rapidly unfolding climate crisis it is a shocking and unprecidented assault on our future by the fossil fuel industry and our political leadership.

Here is a quick tour of this on-rushing carbon tsunami…

TAR SANDS: 5x more in BC

The two biggest fossil carbon projects at the crest of the tsunami are both tarsands pipelines-to-super-tankers projects:

The BC government says it is "taking an aggressive approach" to jump start a gigantic new fossil fuel industry in the province -- Liquid Natural Gas (LNG). Thirteen major projects have been proposed so far. The yearly climate pollution resulting from these 13 LNG projects would be over 800 MtCO2 per year. So far, the National Energy Board (NEB) has approved 11 of the 13 proposals for export and rejected none. Here's a list:

The coal already exported from BC creates as much climate pollution as all the fossil fuels burned in the province. Despite this huge climate impact, the coal industry is pushing to double BC coal exports in the next few years. Almost all the expansion is for the most climate-damaging of fossil fuels, thermal coal. So far neither the Harper government, nor the Clark government has opposed any coal expansion proposal. Here is the current list:

Will they allow the fossil fuel industry to radically transform BC into one of the most carbon-dirty economies on the planet? Or will they follow up on their promise to reduce climate pollution and insist that BC be a part of the solution to the rapidly emerging climate crisis?

The critical decisions are being made now. 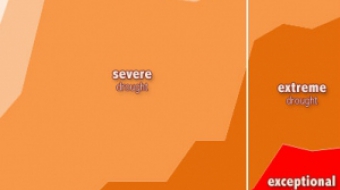