A voice of Morocco's democracy movement speaks to VO the day before her trial. 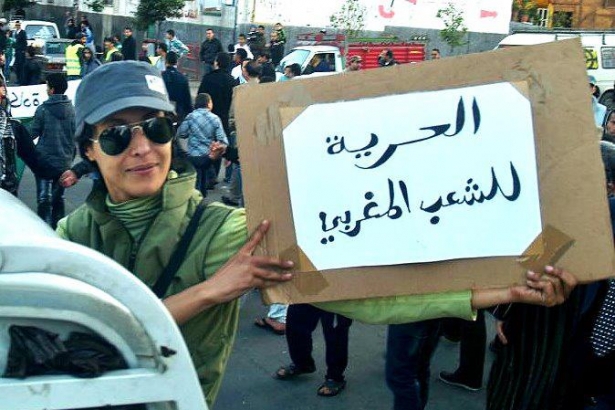 I first spoke to Moroccan civil liberty activist Maria Karim in May, before her friend and colleague, rapper Lhaqed (the enraged) was sentenced to one year in prison for insulting authorities with a music video made for his song Kleb Adawla, Dog of the State.

Tomorrow, Karim will stand trial for allegedly insulting a prosecutor representing the state in the Lhaqed trial.

Then as now, I was impressed by Karim's laughter – it creeps up at the most inopportune moments in our conversations.

“In Morocco, we don't need Kafka,” she said today, over the phone from Casablanca, laughing.

“Every day in our country is a testament to absurdity.”

It's not for me to say if the laughter comes from fear, existentialism, indifference – feigned or real or a courage of conviction. Here is a transcript of our conversation:

VO: What are the events that led up to your trial tomorrow?

MK: Officialy, I am being sued by a prosecutor of the state for having brought injury to a lawyer in the trial of Lhaqed, where he was prosecuted for one of his songs – Kleb Adawla – and sentenced to one year in prison.

We are friends. We met each other while I was filming February 20th activities last year in Casablanca (Morocco's democracy movement is referred to as the February 20th, after the date when Moroccan protestors started taking to the streets). We were inspired by each other during the movements because of our appreciation of art, rap.

I'm an artist in images – in photography and documentary, and Lhaqed was particularly interesting because of his belief in his songs and rap's power to change society.

When he was arrested, it was a huge injustice.

That day, I stopped filming documentaries – symbolically. I was no longer a neutral party in the movement.

I worked in movement to free him in his first imprisonment. I hoped to show who Lhaqed was and all the injustice he suffered as part of the injustices Moroccans suffer as a whole.

At Lhaqed's trial, everything was in Qur'anic Arabic (as opposed to Moroccan dialect). I had to struggle to understand. The lawyer was aggressive and surreal with everything he was saying about Lhaqed. It filled the court with absurdity, so I started laughing. The judge told me to calm down. That's the judges responsibility – to create calm.

That was when the state prosecutor called me a vulgar word. He said, 'look at this (expletive) how she is vis-a-vis the judge.'

I told him, excuse me, you can't interrupt a discussion between me and the judge. That was when the lawyer spun out of control, saying that I had disrespected him.

The judge suspended the trial – I apologized to both the judge and the lawyer in a private audience. But I did ask if that lawyer had the right to interrupt our exchange, and the judge confirmed he did not.

The judge said in front of the assembly that I presented my apology and the lawyer had accepted.

But I was leaving court house to get a coffee, and the police halted me. A commissioner said need to take you to nearby office...

They took me to the commissariat. They asked me questions totally unrelated – why I was doing activism. They never recited my rights. I refused to respond.

I was then detained for 48 hours. I kept my cell very clean. I respected the law.