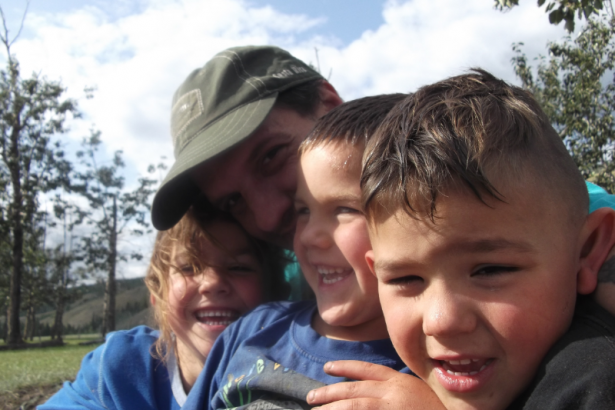 Photo of Donovan McLaughlin with his children

In the cold northern town of Dawson City, Yukon, 59-year-old Donovan McGlaughlin speaks with a heavy voice as he describes what it's like to wake up each morning, wondering if the government will deport him. McLaughlin lacks identity papers, and can't prove he is a Canadian citizen.

"Every day, it's just...living in fear," he said with a sigh. "I have two six-year old twins, a boy and girl, and a five-year old boy. I want to be able to enjoy life with my children without being taken away. They deserve to have their father."

A life outside the system

The thing is, McGlaughlin isn't an illegal immigrant. He has lived in Canada for 40 years, and is the son of a Canadian mother and Native American father. His wife is from Québec. But although he appears Canadian through and through, McGlaughlin is one of the extremely unusual cases of Lost Canadians who doesn't have citizenship, due to the unique circumstances of his birth.

Citizenship papers aren't all he lacks. He also has no birth certificate, social insurance number, or even a health care card. Because his parents were anarchists who distrusted governments, McGlaughlin has spent his whole life outside of the system.

"My mother was a very devout anarchist, and we moved around constantly, all over Canada and then Europe," he said. "But at 15, I'd had enough and came back to North America, then settled in Canada when I was 19 and have been here, ever since."

As the son of an Aboriginal father, McGlaughlin should legally be able to travel anywhere around Canada and the U.S. without fear of being deported. The trouble is, it requires documented proof of his background, and McGlaughlin has none.

"My parents never did anything more with the government than they absolutely had to, especially my father. He trusted no government official."

According to citizenship advocate Don Chapman, McGlaughlin's story is not unique. In addition to Indigenous people in Canada, he said there are similar cases among Aboriginal people in Australia.

A legacy of residential schools and colonialism

McGlaughlin explained that given the history of his father's people, it was understandable for him to be suspicious.

His father also was one of the last remaining Susquehannock, a tribe now broadly considered extinct. The Susquehannock were mostly massacred in the Northwest Indian War in 1792. The few who survived eventually lived with the Lakota and Cheyenne in South Dakota.

His father, he said, met his Canadian mother in Rosebud Sioux Reservation, South Dakota, which he described as a "hellhole" during the 1950s for the people living there. The situation appears to have changed little since, with life expectancy for men there still at just 47.

"The (U.S.) government didn't care about the people there. They didn't do anything for the First Nations there," he said.

His parents were both acutely aware of the residential schools in Canada, and the rampant physical and sexual abuse going on in them. Thousands of Aboriginal children died in such schools, while others dealt with trauma and substance abuse in their adult years.

If the Canadian government found out that McGlaughlin was half-Aboriginal, what was to prevent them from forcibly placing him into one of these schools?