While speaking at a press conference in Surrey, Citizenship and Immigration Minister Jason Kenney stated that the government does not deny citizenship based on age, gender or marital status. Yet these factors are at the heart of problem for "Lost Canadians", who are taking the federal government to court over its refusal to grant citizenship to victims of Canada's discriminatory laws of the past. 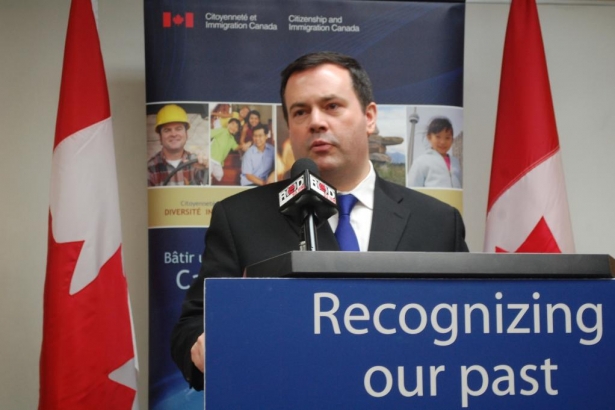 The “Lost Canadians ” citizenship case has now officially gone to court. Don Chapman, who has championed the case of thousands of legitimate Canadians who have been denied or stripped of citizenship due to arcane laws – filed for the federal judicial review yesterday for Jackie Scott, a Lost Canadian.

Chapman suggests the Canadian government could forfeit “tens of billions of dollars” over this case, which was eight years in the making.

His main argument centres on gender and age discrimination, both of which are outlawed by Canada's Charter of Rights and Freedoms.

"In a sense, our shared identity is on trial, as is the Charter of Rights and Freedoms," Chapman argued, noting that the legal battle could have been avoided if the government stopped clinging to outdated laws that denied people based on age, gender and marital status.

Why should this trial matter for Canadian identity? It matters for two reasons. First, the government is basing its exclusion of Lost Canadians on old laws esteeming women's rights beneath those of men. Secondly, it now claims that no one who died in Canada before 1947 was ever a Canadian citizen -- including war veterans.

A sexist and ageist law

The case of Jackie Scott, the daughter of a Canadian war veteran, embodies many problems faced by people involved in this legal battle.

Scott moved to Canada with her mother and father from England when she was several months old and lived for over 60 years as a Canadian: working, raising children, voting and paying taxes.

In 2005, Scott was denied citizenship based on the fact that her parents were unwed on the date of her birth. According to laws of the time, a “legitimate” child was considered property of the father, while an out-of-wedlock child – a “bastard”, so to speak – the sole responsibility of the mother.

Even though her parents married shortly after arriving in Canada, the government dismissed her request for citizenship, using the now-defunct rule for out-of-wedlock children to justify its decision.

Scott soon found that thousands of other Canadians were similarly affected by unjust citizenship laws -- one man, for example, was refused Canadian citizenship because he was born in wedlock to a Canadian mother and American father. Had his mother given birth outside of wedlock, like Scott's mother, he would be a Canadian today.

After extensive lobbying by Chapman, himself a former Lost Canadian, the group forced Bill C-37 into place in 2009, retroactively granting citizenship to those who lost their status. Mysteriously, however, the government only granted citizenship to Lost Canadians born after Jan. 1, 1947 -- excluding elderly applicants like Scott.

If Scott had been just two years younger, she would have been a Canadian citizen. Advocates for the Lost Canadians question how that could not be regarded as discrimination.

Undeterred by the 2009 exclusion, Scott applied again for her citizenship, and waited an agonizing two years for a reply from the government. In January 2012, Citizenship and Immigration Canada sent her a rejection letter. Shaking with disbelief, Scott read once again that her case was invalid because she was born out of wedlock, but a new passage caught her attention. It claimed that her father -- an Ontario-born war veteran -- was in fact never a Canadian citizen to begin with.

The rejection letter from the CIC states:

“...at the time you were born in 1945, neither of your parents was a Canadian citizen. Before 1947 persons born in Canada such as your father were considered British Subjects...”

“The government is revising history by denying Jackie her citizenship,” Chapman said.

On Wednesday, the Vancouver Observer asked Citizenship and Immigration Minister Jason Kenney whether citizenship can be denied based on gender, age or marital status. Without missing a beat, Kenney shook his head and replied:

"No, citizenship isn't and shouldn't be. The Citizenship Act lays out who can become citizens and it is available to anyone ... regardless of marital status or age."

And yet, Scott remains excluded from the same citizenship that millions of foreign-born newcomers to Canada enjoy today, precisely because of her mother's marital status and her own advanced age.

Chapman pointed out that more lawsuits are coming to correct what he considers an historic wrong.

"The government is making this claim for the sole purpose of keeping people out of citizenship," he said. "They either do not know their own laws  -- I have a feeling Kenney is so ignorant he doesn't know what he is defending -- or, if they do know the laws, they are purposefully ignoring Supreme Court decisions."