Not your standard new Canadian 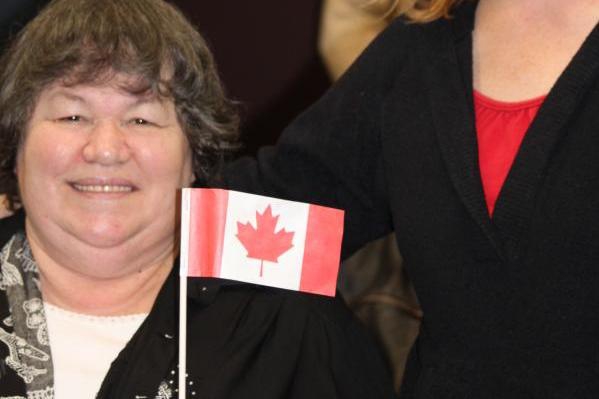 Sandra Burke, left, on her first day as a Canadian. Her stepdaughter, Pamela Murray, right, says the fight for her Ontario pension is still not over.

Sandra Burke, 66, didn’t even have the proper identification it takes to get into the citizenship ceremony. Luckily for her the guard at the door was aware of her case and made one of the few exceptions she has had in her 59-year road to citizenship. On Dec 21, in Mississauga, Ontario, Burke was finally able to take her oath of statehood along with 150 other new Canadians from 42 different nations. Burke, however, is not your standard new Canadian. She lived in Canada and enjoyed the benefits and responsibilities of a Canadian for six decades, only to be denied her pension when she was 65 on the grounds that she was not a citizen.

“It was long and dragged out, but I got my citizenship. They [the judge] did a little speech at the end of it and told everybody that I fell through the cracks and explained how it happened and everybody clapped and I felt good...I’m now from Canada. I became very proud. It was a great relief,” she said.

Until Tuesday, Burke was a ‘Lost Canadian,’ a title referring to potentially tens of thousands of Canadians who, by a continuing set of obscure Canadian citizenship laws, find out they are not Canadian. Being born out of wedlock, not being in Canada on your 24th birthday, being born outside of the country to a Canadian citizen who themselves were born out of the country, were once some of these laws. Many have been since changed, but not all.

Burke discovered she was part of this internal diaspora two years ago when, at 65, she was denied her Ontario Age Security pension because she was unable to produce proper citizenship documents. Despite having voted in Canadian elections, paid taxes, and mothering three children, all Canadian, she was told that unless she was able to show landed immigrant papers from her arrival into Canada, she wasn’t eligible for the same benefits as real Canadians – documents she said she never had.

“When I went to draw out my application for my old age pension and they asked me for my papers, I said 'what papers?'”

Burke was born in Massachusetts in 1951 and put into an orphanage after her American mother died and Canadian father deserted. Her Canadian grandmother rescued her from the orphanage and brought her to Canada when she was six years old.

“They made me feel like I came in under her coat,” she told the Vancouver Observer in July 2010, back when her case looked bleak.

Burke’s failing health and need for medical and provincial housing benefits made this more than a symbolic fight. Without citizenship or landed immigrant documents, she was no different than a tourist in the eyes of the Ontario provincial pension desk. Burke’s stepdaughter, Pam Murray, scoured archives across Canada and the US on her behalf, looking for anything that would prove her lineage, but always came up short. For almost two years Burke’s citizenship applications were turned down in a Catch 22 fashion, needing document a to get document b, and needing document b to get document a.

“I couldn’t imagine our country letting her down…I was sitting on the edge of my seat until the very end, because I just didn’t want to relax until it was done. She had her certificate, and I snatched it out her hands and ran to our MP’s office so he could copy it and send it into Old Age Security," Murray said.

It was only when her MP, Mississauga South representative Paul Zsabo, took up her cause, did Burke begin to sense a glimmer of hope.

“I must admit that the circumstances and history were very complicated and the process stalled at every stage. I am very happy for Sandra and her family. This has been a stressful ordeal for all concerned,” he told the Toronto Star.

Burke, Murray, and Zsabo’s efforts converged on Dec 21, when Burke was finally able to call herself Canadian. Her next battle is to try and have her OAS pension applied retroactively to cover the year and half she was denied it for not being a citizen.

The Vancouver Observer has been following the case of the Lost Canadians since July 2010. Former Lost Canadian and leader of this group, Don Chapman, has dedicated much of his life advocating for people like Sandra Burke. He has been instrumental in changing Canada's citizenship laws several times, but to this day finds himself still fighting for those who through no fault of there own are still without citizenship.

“I come from the hardest country to become a Canadian, Canada,” Chapman said.

Chapman too played a role in Burke’s case, but says that Canada’s current citizenship act needs to be amended yet again to avoid future cases, specifically those having to do with people born out of wedlock to Canadian World War II veterans born overseas.

“I'm thrilled that she's been recognized. The problem is that this government has known and continues to know that people born prior to 1947 are at risk.”

Canada’s current citizenship law upholds antiquated regulations that don’t recognize out of wedlock children born overseas sired by Canadian men before 1947. Many of these children, now living throughout Canada, are reaching retirement age and may soon find themselves in the same quagmire as Sandra Burke.

Canadian Minister of Citizenship, Immigration,and Multiculturalism, Jason Kenney, and his office declined to comment to the Vancouver Observer.

For more on this story see the Vancouver Observer’s award-winning series, The Lost Canadians.