Randy Quaid is seeking asylum in Canada, but today at his a hearing with the Immigration and Refugee Board, his wife will not be requesting the same protection. Evi Quaid was born in the U.S. to a Canadian father. She is a 'lost Canadian.' 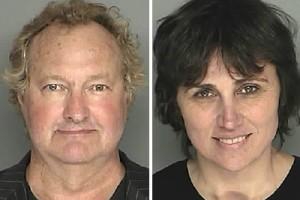 Randy and Evi Quaid are wanted in California.

When Evi Quaid pleaded for refugee status in Vancouver last month, she didn't carry a Canadian passport. Her detention surely would have gone differently if she had.

Only when a lawyer began preparing for the married couple's eligibility hearing did Quaid seem to learn the ruling would be unnecessary in her case.

"In the process of doing her eligibility hearing for her refugee claim, some of the information that she gave us led us to believe that she is possibly a Canadian citizen."

They reached her father and he forwarded the information needed to establish her hereditary ties to Canada.

"So they withdrew all their proceedings and she can live here, she can work here, she's one of us," Sas said.

She is not the only celebrity 'lost Canadian.'

The reasons for Randy and Evi Quaid's arrival in Vancouver has been reported in the international press here, here and here. And here, too. Their accusations of "Hollywood star whackers" is alarming in its peculiarity and farce. Yet, her Canadian citizenship changes hers and, by extension, her husband's status in Canada.

Quaid's status as a 'Lost Canadian,' a term coined by Don Chapman and repeated by politicians and bureaucrats ever since, begins with the former Canadian Citizenship Act. When Quaid was born in 1963 in Vermont (according to her IMBD biography), the legislation amounted to a sexist and Kafkaesque nightmare that detailed more than a dozen ways a Canadian-born person could lose his or her status as a Canadian.

This could have happened in two ways for Evi Quaid.

After her father arrived in the U.S. (she claims he worked for the FBI) and eventually had a child, he would have had the choice of registering her birth with Canadian authorities. If he'd done this, his child would be Canadian until her 24th birthday when the legislation require she re-register in order to retain status in Canada as a citizen. If she didn't do this --- and if this was not something she knew was mandatory, as was the case for thousands of former Canadians --- her citizenship was revoked.

If she was not registered at birth, she would have no claim to citizenship.

But citizenship laws changed in Canada on April 17, 2009. The wide-sweeping Bill C-37 erased the age-24 clause along with more than 10 others and an estimated hundreds of thousands of people were suddenly eligible for the rights of Canadian citizenship.