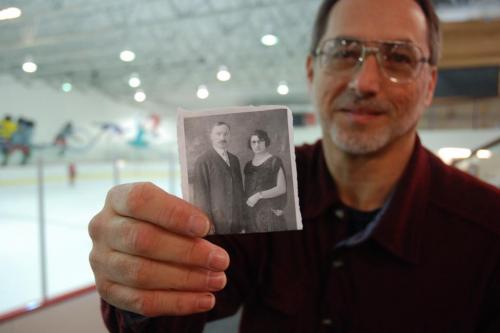 Howard Kornblum in a photograph by Megan Stewart

If Howard Kornblum was going to prove he is a Canadian citizen, he had to find out where his mother was on January 1, 1947.

That was the day (nine years before his birth) that Canadian citizenship came into existence. In the aftermath of the Second World War, the British Nationals Act was replaced with a homegrown law designed to dissolve ties with Europe and generate a distinct, unique identity through nascent Canadian nationalism.

The population slipped above 12 million in 1947 link; and thousands of war brides, married or otherwise and many with children, were arriving in Halifax, St. John’s and Montreal.

Everyone born in Canada became “a natural-born Canadian citizen,” as long as they had not naturalized or sworn allegiance to another country. Kornblum’s mother, Anna, became a citizen on the first day of 1947. She was 19 years old.  Unknown to her, she forfeited this new Canadian citizenship when she moved to Chicago to study nursing. She met a medical student, married and started a family in Illinois. For the rest of her life, Anna walked to a U.S. post office and registered as an alien resident. She never became an U.S. citizen and, as far as she was concerned, she was Canadian.

In fact, she was stateless.

Because of a gender bias in Canada’s citizenship law, Anna was not able to pass the right of Canadian citizenship to her U.S.-born son.  Three months ago, Kornblum sat with me in an East Vancouver hockey rink and lamented the complex legal detritus he was suddenly charged with shoveling off the grave of his mother’s citizenship. He’s a Canadian, he says. “I skate every chance I get,” he said over the phone before packing his Bauers in the trunk of his sedan.

He gives the impression that he’s nothing but law-abiding and is reluctant to pose with an image from an ancestry website in case he’s violating copyright law. He folds back the photocopy of the image to conceal the source.  A chartered accountant, Kornblum wants to work in Canada and for that, he needs proof of citizenship. When his application took too long, he sued the government.

Kornblum spoke in a nasal voice that could be described as whiny if that’s what he did. Rather, he articulated long, complicated sentences on court procedure, judicial rulings and citizenship legislation. He filled the void with his voice. He fidgeted and twisted his head to stretch his neck over and over.

In one hearing in front of a court justice, he learned just how unusual was his action, as the justice said:

“Mr. Kornblum, look at me please, because people don’t normally appeal directions on administrative matters. It’s not something that is common. On the other hand, I’m not too inclined to give cost especially that you have two other motions and I don’t want Mr. Kornblum to be unnecessarily burdened; I understand your point, but I must say, this is the beginning of his file…”

He was levied with full costs, but did get what he was after: proof of citizenship. Kornblum was not seeking a grant of citizenship because he didn’t need one—what he needed was the proof. He needed the slip of paper signed by the Minister of Citizenship and Immigration that assures his status as a Canadian.

He couldn’t pinpoint where his mother was the day she turned 19. But when he got the precious document he sought, Kornblum called me from Manitoba. “It’s a great day, Megan! It must be the Wheat Kings jersey I’m wearing.”