Sandy Burke is fighting to be recognized as a Canadian citizen. It's a battle she can't afford to lose.  This is the fifth installmant in a ten part series about an injustice that may outlive a number of its victims. 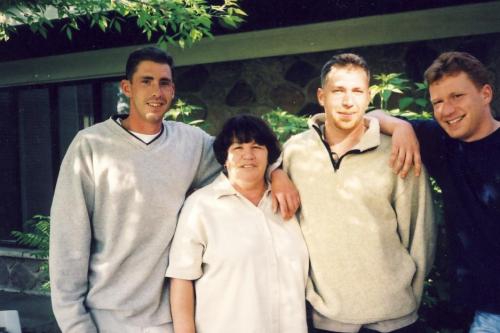 Sandy Burke and her three sons

Today we call it identification, but back then it was simply called ‘papers.’

“When I went to draw out my application for my old age pension and they asked me for my papers, I said what papers?” Sandy Burke exclaimed into the phone with a tone that said there once was a time when common sense prevailed over the letter of the law.

Without papers, Burke cannot draw on the system she has paid into for the past fifty years. Nor can she apply for other senior health benefits like subsidized senior’s housing, she said. After trying to prove her identity using various other documents, SIN card, pay stubs, transit ID, even an Anglican church membership card dating back to the 1960’s, Burke was told that she needed a proof of citizenship card. Pam Murray, Burke’s daughter in-law, scoured the archives of P.E.I. and Massachusetts on her behalf searching for the necessary application materials. Murray turned up grandparent birth certificates, wedding documents, baptismal records, but no landed papers. In early 2010, Murray collected everything she found, put it in an envelope for Citizenship and Immigration Canada, and applied for Burke’s Canadian citizenship. Burke was denied in June, less than a month before Canada Day.

Even a personal letter from her MP, Liberal Paul Szabo, referencing compassionate grounds because of Sandy’s critical health and highlighting her service to Canada was not enough.

Having exhausted all but a few options, Burke was informed that the only avenues available are a citizenship grant, 5(4), or family sponsorship. The prior is not guaranteed, (in fact it is rare even though the 5(4) grant was created specifically for cases like these), and the latter is costly, upwards of 1000 dollars Murray said. Neither process promises retroactive citizenship either, meaning that if Burke is ever ‘dubbed’ a citizen, the exact date of being a born again will Canadian marks the first day Burke can collect OAS payments, leaving her to fend for herself during the gap with no retroactivity.

“It feels degrading,” Burke says, having just explained that she is beginning to lose hope. “But maybe it is my own fault. Maybe I should have looked into it. But I never even thought of it. It only occurred to me when I applied for old age pension.”

Pam Murray does not reflect the same humble reflection that is Burke’s curse of being ‘ordinary’ against the wheels of the Canadian Citizenship Act bureaucracy.

“This woman deserves to live a life that she wants to live right now in her senior years,” Murray said. “Lets give her retroactive pension and leave her the hell alone. Lets make this easy for her for a change. She has struggled enough.”