Canada's highest elected officials are aware of Jackie Soctt's case and yet they refuse to talk with the press.  More than 170,000 people from around the world become citizens in Canada every year after entering the country as immigrants. Meanwhile, because of antiquated legislation, the government denies people born to Canadian parents and those who have lived here half their lives, full rights of citizenship.  This is the second story in a ten-part series about an injustice that may outlive a number of its victims.

Everyone in the RV Park seems to know about Jackie Scott’s case.

“Isn’t it something?” Vickie the receptionist says as she tallies the day’s arrivals. One look at our camera equipment and she is already on the phone to Scott to announce our arrival. She is one the more high profile cases.

On June 11th, 2009 Scott gave testimony in Ottawa at the Standing Committee on Citizenship and Immigration, on what would have been her Canadian War Veteran father’s 98th birthday. The topic of the day was to address the outstanding cases that have not been covered in the so-called Lost Canadian Bill – Bill C-37.

“I was given five minutes,” she said about her testimony, “I wasn’t even able to finish.”

The language is polite inside Scott's RV, but the name Kenney can be substituted for any foul punch line. As Canada’s current citizen and immigration czar, Cabinet Minister, Conservative Jason Kenney, is the only person standing between Scott and a 5(4), a grant of citizenship that only the Minister can approve.  Her long road to legitimization rests in the ink of the Kenney’s pen. 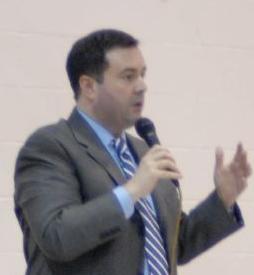 After her unsuccessful testimony in June 2009, Scott and other outstanding Lost Canadians held a press conference in Ottawa in October 2009, pleading their case on the parliamentary steps, hoping to get the Minister’s attention.

“Rather than having press conferences or trying to politicize their application, just make a solid application, make a strong case, and it will be considered fairly on the merits of their case,” Kenney told the CBC of their display.

A year and a fresh denial later, however, Scott is still not a Canadian citizen and the list of ‘lost’ is growing once again. On his recent visit to Vancouver to celebrate a festival dedicated to Canada’s migratory cultural mosaic, Kenney declined comment to The Vancouver Observer, as did his office in Ottawa regarding Scott's case.

UVIC immigration law professor, Donald Galloway, is well acquainted with the Lost Canadian saga. He gave expert opinion to the Senate review committee on the draft of Bill C-37. He says that the Minister’s approach is not surprising.

“At the time the Minister suggested that deserving cases would be adequately dealt with expeditiously on a case by case basis. That this case (Scott’s) has not yet been resolved reveals that a narrow legalistic attitude seems to be have prevailed.”

As for Scott’s would be MP, Conservative Nina Grewal, Fleetwood – Port Kells, who was a member on the Standing Committee on Citizenship and Immigration that Scott addressed one year ago, she too has declined to comment to the Vancouver Observer. Her staffers noted that the ‘unique’ aspects of Scott’s case do not allow for disclosure. They were kind enough to suggest contacting Citizenship and Immigration Canada saying that office would be more ‘appropriate’ to answer, undoubtedly knowing that CIC cannot comment on individual files, nor can they change the laws  – that is something only MP’s do.

As the stonewalling goes on, the government is working on an amendment to Bill C-37, one that is said to address the issues the government was aware of in 2008 but did not have the time to push through.

West Vancouver – Sunshine Coast Conservative MP, John Weston, who has had to tackle the issue because of a tireless and prominent Lost Canadian activist in his riding, Don Chapman, said the government is aware of the problem and has been consistent in their efforts to fix the situation:

“We have yet another proposed improvement to the Citizenship Act, introduced in the house, another Bill C–37,” Weston said. “And that bill, among other things will deal with or remedy situations where we have unintentionally barred citizenship to eligible applicants.”

Though Jackie Scott is one of those who have been unintentionally ‘barred’ their citizenship, (she has never renounced her nationality), she need not get her hopes up over this new action. The proposed amendment does not address those born out of wedlock before 1947, Chapman said, nor does it address the 81 cases that he has taken up cause for through his website.

In fact were it not for the private lobbying of groups like his, which among other things provides a forum for those in limbo to network and lobby collectively, their voices would have died years ago under the attrition of the bureaucracy.

As the debates continue on parliament hill, Scott waits patiently at the 176th Surrey border and volunteers her time around the park. She is no longer legally allowed to work in Canada, even though she has been offered employment at the RV site. Her third set of applications, one for yet another 5(4) grant of citizenship and the other asking for naturalization dating back to the time of her birth, are in review.

If denied again, she said she will launch a court challenge, as other notable Lost Canadians have done, and get the law changed at great expense to the Canadian taxpayer.