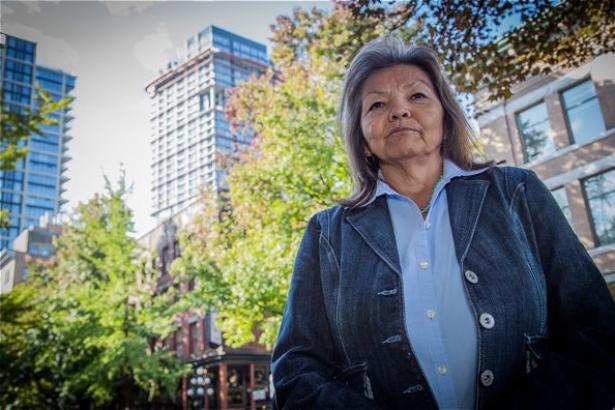 Tribal Chief Liz Logan, a poised, articulate negotiator who has served four terms as Chief of Fort Nelson First Nation, followed by eight years as Tribal Chief of Treaty 8 Tribal Association, has silvery gray hair and penetrating brown eyes and an impressive command of the facts and figures regarding gas and oil extraction in the Treaty 8 Territory of Northeast BC.

In the 1940s, the first gas well went in. Today, there are over 23,419 operating wells.  This does not include the dry and abandoned wells, which are believed to total another 4,000. But it hasn't stopped there.  “It’s drill, baby, drill,” Logan says, but in the course of an hour-long interview with Logan, it became clear that she doesn’t plan on sitting back and letting that happen.

She told the Vancouver Observer last week that she hoped to convince the UN Special Rapporteur James Anaya to pressure the government of British Columbia to conduct  a “regional  strategic environmental assessment to look at the cumulative impacts of all of the development planned, especially now, before the LNG projects actually happen.”

Canada is currently under investigation by the United Nations Committee on the Elimination of Discrimination against Women (CEDAW) over the responses of the federal government and federal and provincial judicial agencies to the murders and disappearances of more than 600 women across Canada in the past several decades.  And as Roger Annis wrote in the Vancouver Observer last week, Anaya’s visit “comes at an explosive time in Canada as pressure mounts by First Nations peoples against tar sands and other fossil fuel projects in western and central Canada and as demands grow for a national, public inquiry into the cases of more than 600 missing or murdered women across the country, most of whom are Aboriginal. The federal government is also refusing international pressure to convene such an inquiry.”

Anaya was at the end of his extraordinary mission in Canada when he met with First Nations in Vancouver at the Musqueam Centre.  Logan had 15 minutes with him, enough time to hand over documentation of the continued colonization of Treaty 8 Territory by the oil and gas, hydroelectric dams, mining and forest industries.

Logan says ongoing government sanctioned industrialization and resource extraction has broken the treaty promise that her people could practice their way of life. They have acted, she says, "as if there was no treaty."

The territory governed by the treaty is enormous, totaling 840,000 square kilometers in all three provinces and NWT.  It includes towns and crown land largely inhabited by non-First Nations, but the treaty nonetheless affords First Nations the right to hunt, fish and trap in those territories "for as long as the sun shines, the river flows and the grass grows."

But Treaty 8 First Nations can't always see the sun shine anymore due to the air pollution, Chief Logan says. And the grass no longer grows as it once did due to pesticide use by companies in the oil patch to keep pipeline right of ways and lease pad free and clear.  The province sends a nearly constant stream of mining, forestry, gas and oil projects and numerous other crown land applications to the Nations to fulfill the government's requirement to consult with First Nations, according to Logan.

"We’re 30 per cent of the province. That’s how big we are," she explains.
"And this area lies over the Western sedimentary basin, which is very rich in oil and gas and mining. We’re the bread basket of the province. All the revenue that come out of Treaty 8 territory is what supports this province."