#MyJihad: How a hashtag aims to reintroduce Muslims to Canada and US

A #MyJihad activist tells VO about a US-based movement against Islamophobia, crossing the border into Canada. 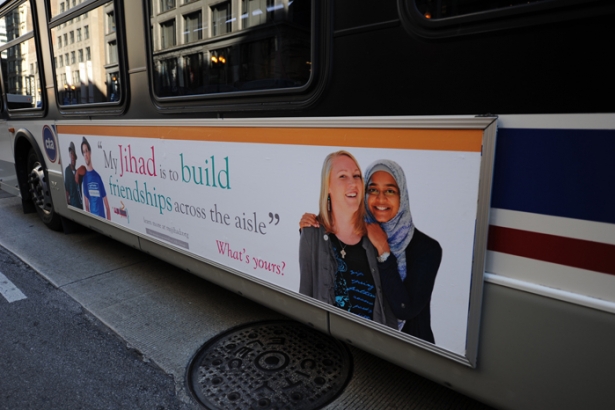 The rise of Islamophobia in Canada and the West is not only a tangible reality for Western Muslims, but in many ways, a deliberate movement -- #MyJihad acts as a countermovement.

At a time when degrading anti-Muslim bus ads are lining New York subways, #MyJihad aims to beat bigots at their own game.

#MyJihad is a hashtag. It's bus ads. But it's also a lot more -- #MyJihad is a cultural movement slated to promote interfaith understanding in the US, Canada and beyond, at a time when hate is all too prevalent.

Islamophobia -- a clear and present 'area of concern'

In 2011, Islamophobia was deemed by The United National Alliance of Civilizations and the League of Arab States as “an important area of concern.” And, though a Gallup study ranks US and Canadian Muslims as most integrated into society -- meaning they actively seek to learn about others and other faiths -- compared to Muslims in other countries, unfavorable public opinion still exists. The causes are primarily due to misinformation, lack of information or simply put, not personally knowing and interacting with Muslims. Add to this, the growing Islamophobia network, particularly in the US, actively spreading fear and misinformation.

Bayan Khatib, a Toronto settlement worker and Syrian Revolution activist, qualifies Islamophobia as unfounded fear of and hostility towards Islam.

“These negative feelings toward Islam often come from ignorant viewpoints," she said. "I find that people with a well-rounded education are less likely to foster hostile feelings towards others who are different from them. Also, contributing to Islamophobia is the media's negative representation of Islam and it's constant connection to terrorism.”

Though not as pervasive as in the United States, Khatib reflects on the state of Islamophobia in Canada.

“Canada is generally a multi-cultural country with people of various religions and cultures living together peacefully, and so Islamophobia is not a huge problem. However, it does exist.”

When Pamela Geller, whose organization, Stop the Islamization of America (SIOA) -- designated as a hate group by renowned anti-hate-mongering organizations like the Southern Poverty Law Center (SPLC) -- purchased ads in New York City’s subway, relegating Muslims to the “savage” among us and urging others to “stop Jihad,” a group of activists in Chicago started their own grass-roots campaign called #MyJihad (http://www.myjihad.org) which aims to “take back Islam" from both Muslim and anti-Muslim extremists.

The #MyJihad campaign idea, sparked by Ahmed Rehab, Executive Director of CAIR-Chicago (Council of American Islamic Relations,) quickly gained a following of people of all denominations. Citizen activists, suburban moms, students- all came forward to jump start Rehab’s idea into motion. This grass roots movement officially kicked off in December of last year with a very different campaign than one might expect- starting with ads placed on Chicago area buses. The news quickly spread across the country and all over the world. Articles were featured in U.S.A. Today, The Washington Post, and overseas in France, Lithuania, Turkey, and as far as China and Australia.

Imam Senad Agic, Phd., of the American Islamic Center in Chicago and Head Imam of Bosniaks of North America, explains the term.