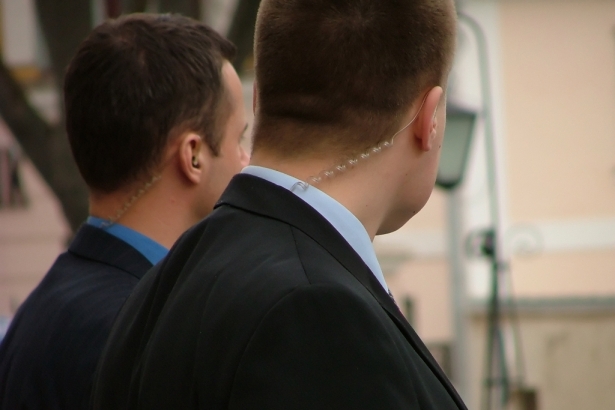 Government spies and energy stakeholders met in Ottawa yesterday to discuss issues of national security, including the monitoring of environmental organizations and activists.

This meeting is the second of bi-annual “classified briefings” held at CSIS headquarters in Ottawa, bringing together federal agencies, spies, and private industry stakeholders with high level security clearances, including officials from energy companies in the oil, natural gas, pipeline, petroleum refinery and electricity sectors.

The last briefing was held on May 23 and was sponsored by Enbridge, Brookfield and Bruce Power.

In attendance at prior briefings were representatives from the RCMP, CSIS, NEB, DND (Department of National Defence) and also the Communications Security Establishment (CSEC), a federal agency that spies mainly on foreigners by hacking into their computers, reading their email and intercepting their phone calls.  It was reported last month in documents released by whistle blower Edward Snowden that CSEC has spied on computers and smartphones affiliated with Brazil’s mining and energy ministry in a bid to gain economic intelligence.

The purpose of the classified briefing is to provide intelligence to select energy representatives, while encouraging the private sector to brief the Canadian Intelligence and law-enforcement community on issues that they would not “normally be privy to”.

“From my experience, these briefings provide an excellent forum to build the relationships required to assist the RCMP within its investigations” writes Tim O’Neil, RCMP Senior Criminal Research Specialist in an email sent in advance of a 2012 briefing.   The energy sector representatives all possess at least a Level II (Secret) Security Clearance. There are three levels of clearance, as defined by the Policy of Government Security: Confidential (Level I), Secret (Level II) and Top Secret (Level III).

Documents published earlier this week reveal the cooperation of the RCMP, CSIS and the National Energy Board in the gathering of intelligence on oil sands opponents, including advocacy organizations and First Nations groups.

“These are legitimate spokespersons, relating concerns that people have on the environmental impacts of Conservative and industry plans”, said Liberal MP Joyce Murray, who suggests that these actions are part of an intimidation campaign by Prime Minister Stephen Harper and his government.

The documents, 140 pages of emails and operations plans from December 2012 to April 2013, show Richard “Rick” Garber, the NEB’s “Group Leader of Security” overseeing the cooperation of RCMP, CSIS and private energy companies.

In a list of 2011 briefing attendees obtained last night, Garber is identified as a representative of DRDC, an agency of Canada’s Department of National Defence (DND).

DRDC provides DND, the Canadian Armed Forces and other government departments as well as the public safety and national security communities, “the knowledge and technological advantage needed to defend and protect Canada’s interests at home and abroad,” according to DRDC’s website.

The National Energy Board, Canada’s independent federal regulator of pipelines, responded yesterday to reports of intelligence gathering on opponents to the proposed developments.   In a statement from NEB CEO Gaétan Caron, he acknowledges that the NEB may work with local officials and federal colleagues such as “the RCMP in the interests of safety for the public hearings, NEB Board Members, staff and the general public.”

It has raised concerns in Parliament that the collection of intelligence on Canadians is happening without parliamentary oversight, and potentially, with partisan influence and outside the confines of the law.

CSIS is overseen by the independent Security Intelligence Review Committee (SIRC). SIRC is currently chaired by former Conservative cabinet minister Chuck Strahl. Disgraced committee member Dr. Arthur Porter, who was appointed by Stephen Harper in 2008, is currently in a Panamanian jail facing a range of charges, from money laundering, to taking kickbacks and conspiracy to commit fraud.

Both the National Energy Board and Security Intelligence Review Committee are supposed to function free of government collusion, but parliamentarians say they believe that the Harper government has instructed, or at least influenced the agencies in this case.   MP Megan Leslie, deputy opposition leader and environmental critic is outraged. “It’s not appropriate for the government to be giving these instructions”.

She feels that they have influenced the NEB either by direct instructions or in creating a fear-based culture within the independent agency.

“The National Energy Board is supposed to be a neutral agency,” said Liberal MP Joyce Murray.

“Of the three members on the NEB Joint Review hearing panel, one is handpicked by the government, with the second holding a power of veto,” she continued, noting that two out of the three panel members are either selected or endorsed by government.

“This is unprecedented,” says Murray, “and now they are potentially instructing the NEB to collect private information and we have no way of knowing if it is being used counter to the law or not.”