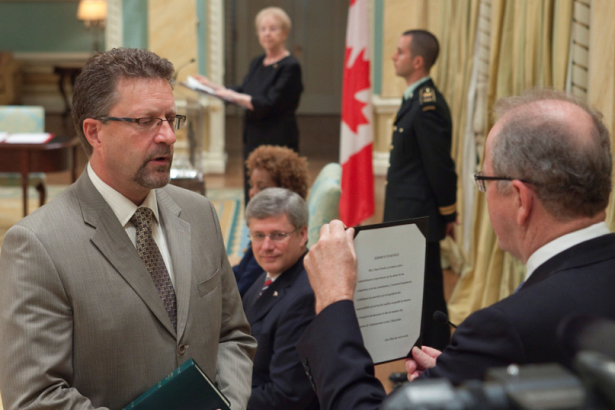 Recently the Vancouver Observer revealed Strahl had registered in B.C. as an Enbridge lobbyist. As the chair of the Security Intelligence Review Committee (SIRC), some questioned Strahl’s suitability to judiciously oversee the Canadian Security Intelligence Service (CSIS), the spy agency involved in the monitoring of Enbridge’s Northern Gateway pipeline hearings.

Enbridge met with Strahl in his role as a cabinet minister on April 29, 2010. Strahl left his position on May 17, 2011. Five months later, in October 2011, Strahl signed an open letter in support of Enbridge's Northern Gateway Pipeline. In December of 2013, Strahl registered as a B.C. lobbyist listing Northern Gateway Pipelines L.P. as his client.

According to Duff Conacher, board member of Democracy Watch and adjunct professor with the University of Toronto faculty of law, Strahl is allowing his work with government departments and Enbridge to overlap in illegal ways.

“There’s a rule that you cannot work for any entity, or any organization, or anyone, that you had significant dealings with during your last year in office… And therefore Strahl should not have been dealing with Enbridge until May 18, 2013, which would have been two years after he left office,” he told DeSmog Canada.

"The open letter Strahl signed on to was illegal,” Conacher said. “You’re not allowed to make representations to anyone for any entity that you had significant official dealings with during your last year in office.”

Yet signing an open letter in favour of Enbridge projects is just the beginning of Strahl’s misdeeds, according to Conacher. Far more serious is Strahl’s position with the oversight committee tasked with protecting citizen rights from CSIS.

“Beyond that though there is a general rule about preventing conflicts of interest…so I don’t think he can work for Enbridge as chair of SIRC because that causes conflicts; it does not prevent them.”

In addition, Conacher worries Strahl’s cabinet position may have exposed him to government information that could be used to benefit Enbridge’s push for the Northern Gateway pipeline.

“There is another rule, that never ever in your entire life after you leave cabinet can you give advice using secret information that you’ve learned on the job,” he said.

Canada’s ethics commissioner Mary Dawson has been politely side-stepping the issue, Conacher says. Her track record shows she tends to avoid controversy as well, with over 80 former ethics rulings made in secret. Conacher’s concern is that Dawson, a Conservative-appointed commissioner, is avoiding the hard questions — questions Democracy Watch details in its eight-page letter to her.

“It’s beyond conflict of interest. It’s also these other rules that apply and it’s not resolved by Strahl just recusing himself if a complaint comes forward about CSIS and Enbridge," he said. “And that’s what Mary Dawson has been dodging.”

Strahl’s behaviour, Conacher says, is “very dangerously undemocratic” and “unethical” because it places “the interests of a few private companies way above the public interest.”

The Conflict of Interests Act has been reviewed over the past year by the House of Commons ethics committee. A full report outlining the position of each federal party on ethics issues is due out this week or when parliament resumes.