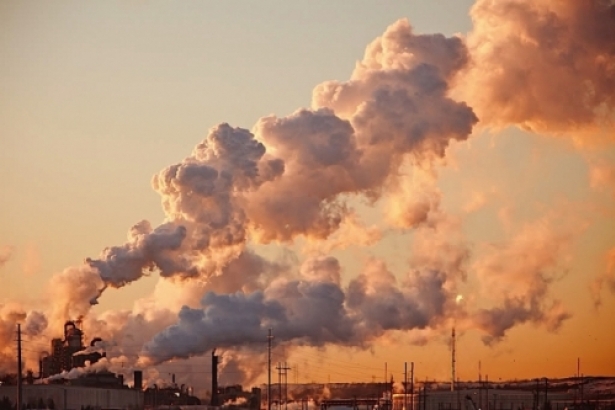 In its latest report the Intergovernmental Panel on Climate Change (IPCC) gave global greenhouse gas emissions a worldwide limit, know as the global ‘carbon budget.’ In order to prevent temperatures from rising above the 2 C threshold scientists have designated to avoid “dangerous” climate change, total global emissions need to stay within about 921 billion tonnes or gigatonnes (Gt).

As Marc Lee, senior economist with the Canadian Centre for Policy Alternatives recently pointed out, the carbon budget “should be a wake-up call for Canada.”

“With a development model based on ever more fossil fuel extraction, Canada’s economy and financial markets are on a collision course with the urgent need for global climate action,” he said.

As Lee explains the global carbon budget of 921 Gt gives the planet a 66 per cent chance of staying within the 2 C limit. But that chance gets drastically worse if we surpass the budget: emitting as much as 1068 Gt leaves us with a mere 50 per cent chance. 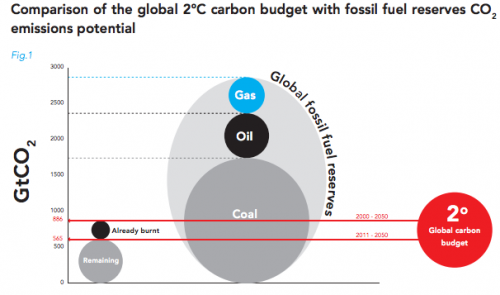 The warming potential of all global carbon assets via the Carbon Tracker Initiative's report Unburnable Carbon.

Canada’s portion of the emissions pie would depend on negotiations, but would likely end up being between 4 (given our population size) and 24 Gt (given our gross domestic product).

When pooled together, however, Canada’s proven reserves of bitumen, oil, natural gas and coal add up to 91 Gt. If you add our probable reserves in you end up with a whopping grand total of 174 Gt.

Even if Canada’s negotiators were shrewd, Lee allows, and end up with a 30 Gt national budget because Canada relies on fossil fuel exports, still two-thirds of Canada’s proven reserves, and 83 per cent of proven-plus-probable reserves would need to remain unburnt.

As Lee writes, this has significant impact on Canada’s financial market:

"This math should alarm institutional investors, and pension funds in particular – because stock market valuations are premised on fossil-fuel-producing companies extracting those resources. Analysts have called this a 'carbon bubble' in our financial markets.

A report recently released by the Carbon Tracker Initiative shows that “currently financial markets have an unlimited capacity to treat fossil fuel reserves as assets.” This unchecked incorporation of what are already considered unburnable carbon reserves is a major market failure, write the report’s authors, that is “creating systemic risks for institutional investors, notably the threat of fossil fuel assets becoming stranded as the shift to a low-carbon economy accelerates.”

The concept of “stranded assets” made international headlines last week after a coalition of 70 investors worth $3 trillion pressured 45 of the biggest oil and gas companies to deal with this concern.

The very real limitations placed on the value of Canada’s carbon assets due to their impact on climate change also casts the Harper Government’s position on resource development in a new light.

Recently Natural Resources Minister Joe Oliver told the World Energy Congress in Daegu, South Korea that “expanding and diversifying our energy exports is a top priority of the Canadian government.”

In addition to having enormous carbon reserves, Canada is failing to adequately manage its current emissions output. According to a new Environment Canada report, Canada’s carbon emissions in 2020 will be 20 per cent higher than the Harper Government’s promised reductions under the 2009 Copenhagen Accord.

Canada’s emissions are set to be 66-107 per cent higher than its required reductions to avoid more than 2 C of warming.