Prime Minister Stephen Harper’s visit to China has put the spotlight on trade and foreign affairs. Here’s an explainer on where we stand with the powerful Asian nation. 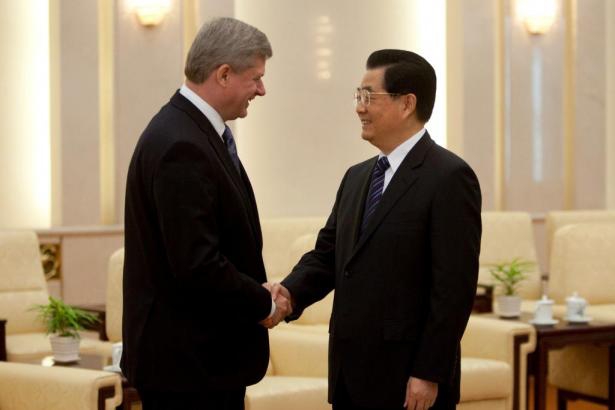 With Prime Minister Stephen Harper’s visit to China this week, all eyes have been on Canada’s deepening ties to the Asian superpower. But what is the current extent of our country’s relationship with China?

This explainer provides an overview of some of the key areas in Chinese-Canadian foreign affairs, including trade and other major topics Harper and his delegation are addressing this week during meetings with President Hu Jintao and other senior Chinese officials.

Since the early 2000s, there have been major increases in Canadian trade with China, but economists say the relationship has yet to meet its full potential.

According to a 2009 study by the Fraser Institute, the past decade has seen China surpass Britain and Japan to become Canada’s second-largest trading partner. While the United States continues to hold the number one spot (by a long shot), trade with China has increased by over 350 per cent since 1998. During the same period, Canada’s trade with the rest of the world only grew 33 per cent.

As China has grown to become one of the most powerful economies in the world, Canada has increasingly acknowledged the benefits of strengthening relationships and encouraging more Chinese investment. But research suggests that other countries with a similar resource base—like Australia, for example—have been more successful at exploiting lucrative trade opportunities.

Competition to win economic favour from China is part of the reason for a big push from the Conservative government to make Canada more attractive to businesses and investors abroad. In 2009, Canada opened up six new trade offices in different Chinese cities to serve as “central points of contact” for Canadian firms and Chinese business partners. A survey done that same year by the Asia Pacific Foundation of Canada revealed that Chinese companies see Canada one of the top target countries for business because of our country’s open attitude to Chinese investment.

According to Statistics Canada, Chinese foreign direct investment in Canada has almost tripled since 2008, going from $5.6 billion to over $14 billion in 2010. Out of the total $562 billion invested in Canada by countries around the world, Chinese investment still makes up just 2.5 per cent.

The Prime Minister’s visit to China this week was a vital step in securing a more stable relationship, and it has already resulted in the signing of multiple agreements regarding investment. The most significant of these—described by Harper as the first “comprehensive economic agreement” between the two countries—is the Foreign Investment Promotion and Protection Agreement (FIPA).

Basically, it means that each country must treat investors from the other country in the same way it treats its own investors (without compromising existing Canadian laws around foreign investment review). The deal also includes a dispute settlement mechanism.