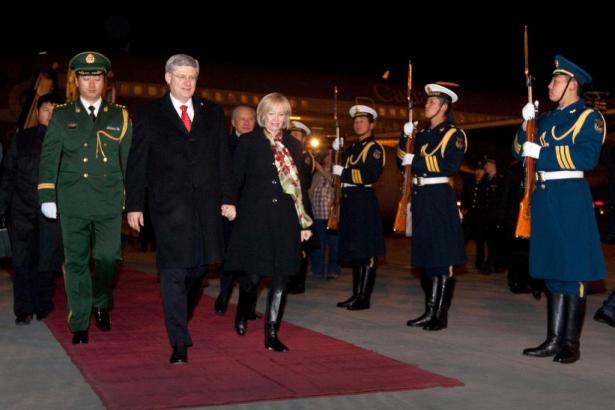 Stephen and Laureen Harper arrive in China to visit with Communist officials.

Prime Minister Stephen Harper arrives in China with his wife, Laureen, and his itinerary in China is packed with opportunities for deal making. Harper has extensive plans to make deals and to strengthen Chinese Canadian relations. Harper plans talks with Chinese from Chinese President Hu Jintao and Premier Wen Jiabao to leaders of the Communist Party. He is expected to be discussing shipping Canadian oil to China as well as a possible pact to protect Canadian investors doing business in the country. Syria is on the table as well.

Harper's itinerary includes touring a building design centre and several other tourists events.  Harper is apparently going to be working on closing several new deals between China and Canada, including agreements relating to foreign investment, a deal which Canada and China have been negotiating for nearly 20 years. Harper's entourage includes top executives from the oil and gas industry. Five cabinet ministers, six Tory MPs and 40 business and community leaders, including high level executives from the agriculture business, are also accompanying the PM.