Editors and news directors from across Canada have selected the late, former NDP leader Jack Layton as 2011's Newsmaker of the Year. 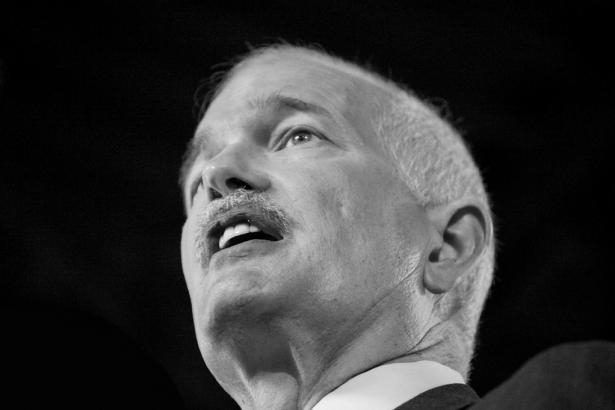 In an annual survey conducted by the Canadian Press, news directors and editors from all over Canada have named Jack Layton the top newsmaker for 2011.

The former leader of the Opposition and head of the New Democratic Party was a clear choice in newsrooms across the country, winning 90 per cent of the votes. According to CP, he won by one of the widest margins in the survey's 65-year history.

Next in line was Prime Minister Stephen Harper, with only five per cent of votes. Other names on the list include new female premiers like BC's Christy Clark, protesters in the Occupy movement, and former auditor general Sheila Fraser.

Editors said Layton earned his place in the headlines as the underdog leader of the left, pulling off a historic victory despite his fight with cancer, and then leaving an "utter vacuum" in Parliament with his death.

In conjunction with the newspaper survey, CP conducted another survey online with Yahoo! Canada, allowing the public to make their own choice for Newsmaker of the Year. And the results were almost the same -- Bon Jack won by a landslide, ahead of Don Cherry, Stephen Harper and Occupy protesters.

To read more about Layton's impact on the news, click here for the full CP story.