Series of four statues of the late runner in downtown Vancouver grow in size as they point the way along the route that he was unable to complete. 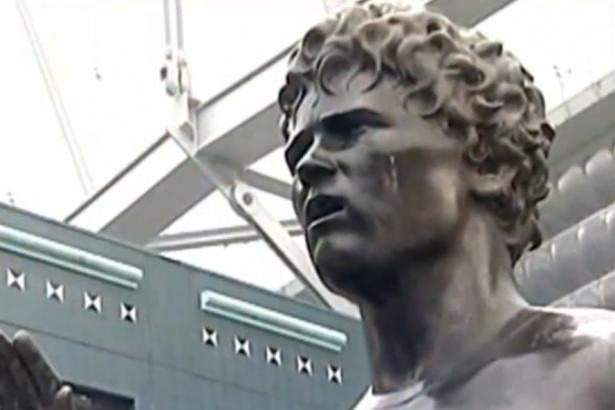 Cancer claimed Terry Fox before he was able to complete his cross Canada Marathon of Hope, but a new memorial by artist Dough Copeland now marks the Vancouver portion of the journey that might have been.

VANCOUVER -- If Terry Fox's cross-country run hadn't been cut short by the cancer that had already taken his leg, his Marathon of Hope would have eventually passed through downtown Vancouver.

It would have meant Fox was near the end of his voyage, which began in Newfoundland in April 1980 and was to conclude in Victoria.

But Fox never made it to the West Coast, never passed through the streets of this city along one of his daily 42-kilometre marathons.

Now, three decades after his death, four bronze statues of Fox stand in downtown Vancouver aligned towards Stanley Park, symbolizing both the journey he was never able to finish and the worldwide movement he inspired.

"These figures grow in stature as they move forward, as Terry's legacy has done since 1981,'' artist Douglas Coupland, who created the statues, told a ceremony Friday as they were unveiled.

"This four-piece sculpture was created so that people living in a thousand years, no matter how different or strange their lives may be, can look at it and understand its message.''

The statues were erected at the base of BC Place stadium in Terry Fox Plaza and attempt show the motion of Fox's instantly recognizable run on his artificial leg. They face away from the stadium towards the city's Stanley Park, which was on Fox's planned route, with each statue growing in size.

A large television screen hangs behind the statues, which will show visitors a brief video of Fox's story.

Fox started his Marathon of Hope in April 1980, when he dipped his foot into the Atlantic Ocean in St. John's, N.L.

For 143 days, he ran a full marathon every day. Fox had covered 5,400 kilometres when, on Sept. 1, 1980, he was forced to stop because his bone cancer had spread to his lungs. He died the following June.

Since his death, annual Terry Fox Runs have been held across Canada and around the world, raising more than half a billion dollars for cancer research. This year's Terry Fox Run is scheduled for this weekend.

When the plans for the memorial were unveiled in January, Fox's mother Betty was on hand with her husband Rolly and Coupland for the announcement.

Betty Fox had spent three decades tirelessly preserving her son's memory, becoming as much a part of Terry Fox's story as her son.

But that event in January was Betty Fox's final public appearance. She died in June.

"I wish my wife was here,'' Rolly Fox told reporters after the memorial was unveiled. "I'm sure she and Terry are looking down.''

Coupland said everyone can learn something from Fox's life.

"Sometimes we all feel like we're just one more person here on Earth -- Why does anything matter? Why do any of us bother going on?'' said Coupland.

"But the fact is that we do go on and all of us matter, and maybe if we follow the example of choosing the more difficult choice, our lives might take on meaning greater than we might ever have dared to hope.''