But passenger escapes deportation after claiming he had to flee Sri Lanka. 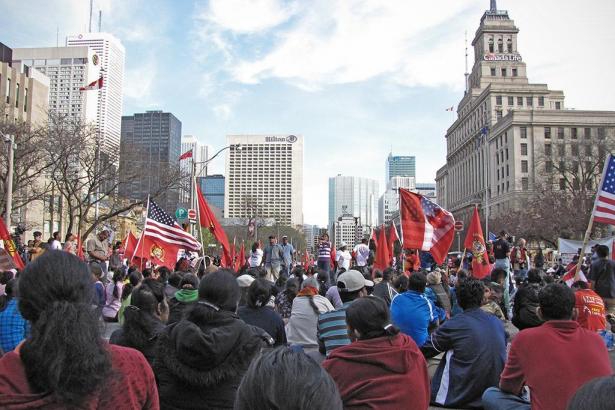 Photo of Tamil-Canadian protest in Toronto against violence in their homeland courtesy of Wikimedia Commons.

There were more developments this week in the case of a Tamil migrant ship that arrived in BC last year -- one crew member is being deported, one passenger has escaped deportation.

VANCOUVER -- A crew member of a Tamil migrant ship that arrived in B.C. last year has been ordered deported, while one of the passengers has escaped expulsion after claiming he had to flee Sri Lanka when one of his possessions was used in a suicide bombing.

An immigration adjudicator has rejected the Canadian government's effort to have the passenger aboard the MV Sun Sea deported after concluding there is no credible evidence the man knew he was helping the terrorist Tamil Tigers in the bombing.

A lawyer for the Canadian government pointed to interviews with the man's wife in which she says her husband helped the Tigers.

But in later interviews, the man's wife recanted and admitted lying to the point that adjudicator Michael McPhalen concluded none of her information was credible because her only goal was to say whatever she thought would help him.

It's not clear what possession the man sold to the Tigers because that detail has been redacted from the ruling.

In a separate ruling, McPhalen ordered a crew member of the MV Sun Sea deported on the grounds that the person helped a human smuggling effort, and even if he didn't know -- as he claimed -- he should have.

A Hundred March to Stop Sri Lankan Violence Against Tamils