News of the World dead, Rupert Murdoch news-model lives on

The news model employed by Rupert Murdoch’s 165-year-old tabloid will live beyond the publication’s recent demise, in papers and TV networks around the world, whether controlled by Murdoch or not. But has the Murdhoch model really rooted in Canada? 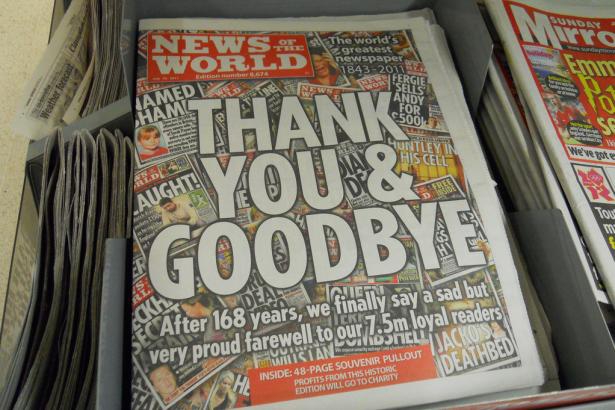 "After 168 years, we finally say a sad but very proud farewell to our 7.5m loyal readers," reads the very last front page News of the World headline.

But the now-defunct tabloid doesn’t really have anything to be proud of, does it?

They intercepted the voicemail messages of murder victims and tapped the phones of fallen soldiers in Afghanistan and maybe even the families of 9/11 victims.

Police arrested former News of the World editor Rebekah Brooks for her involvement in the phone hacking scandal and for alleged illegal payments to police officers, The Telegraph reported Sunday.

All this from a paper made successful not because of hard news or real public interest reporting, but from gossip and scandals.

So unrelenting is Rupert Murdoch's news model that even Canada, while not yet conquered by Murdoch himself, shows signs of adopting this poisonous method, one that prizes celebrity gossip and sex scandals above real news.

"There's nothing particularly special about Canadians that make us immune from the Murdoch model," said David Beers, founding editor of The Tyee, calling the model "a mixture of salacious gossip-mongering and positioning the reader as the victim of one supposed outrage after another, almost always perpetrated by government and never, conveniently, by large corporations."

"We need to remain vigilant by calling BS on the Murdoch model and seeking new ways to create and support independent media that does real public interest journalism," Beers said.

The malicious and criminal acts of the News of the World journalists, alleged as they are, may be endemic in Murdoch’s news empire. Reporters from The Sun and the Sunday Times -- two other papers in the multibillion dollar media behemoth News International -- targeted former British prime minister Gordon Brown’s personal financial and property records, as well as his ailing son’s medical records, the Guardian reported.

But just how far do Murdoch's media tentacles reach?

Murdoch’s News International spans Europe, Australia and -- with its acquisition of the Wall Street Journal -- America too. News International is subsequently owned by News Corporation, a media conglomerate that controls Fox Broadcasting Company and the associated Twentieth Century Fox Films, along with numerous other media-related ventures.

Though the Murdoch empire is large, other than by proximity to Fox news outlets in the U.S. and the assorted papers he owns there, there is no Murdoch channel or paper in Canada.

But that’s not to say his influence stops at the border.

"Don't be surprised if Prime Minister Harper pays a quiet visit to Murdoch the next time Harper happens to pass through New York City, where Murdoch spends most of his time," Smith wrote.

Well meet they did, about a year after Smith published his prophetic blog post suggesting one way Murdoch might break into the Canadian market would be through a Canwest buy-out, but only after some serious political lobbying -- the sort that involves off the books meetings with a prime minister.

As it turned out, Shaw Communications, a Canadian company, bought the financially floundering Canwest instead.

The media mogul’s political meddling is well documented, having reportedly met with former British prime minister Tony Blair ahead of his decision to support the U.S. invasion of Iraq.

"Mr. Murdoch routinely meets with politicians," writes conservative commentator Tasha Kheiriddin, in an open letter at the National Post. "He granted US President Barack Obama an audience in 2008... Mr. Murdoch has also met with other politicians, including former Australian PM Kevin Rudd and current UK PM David Cameron," she writes.

The Harper-meets-Murdoch story matters because even though there is no Fox news in Canada, there is a "Fox News North," the name commonly given to Sun News Network, a new Quebecor Media Inc. 24-hour conservative news channel that hit the airwaves in April.

The network earned the alternative titles "Fox News North" and "Tory TV" before its first broadcast due to the right-wing content many expected to see there.