Royal newlyweds' Canadian roadtrip a success for both sides

Monarchy got positive spin -- and so did Canada. 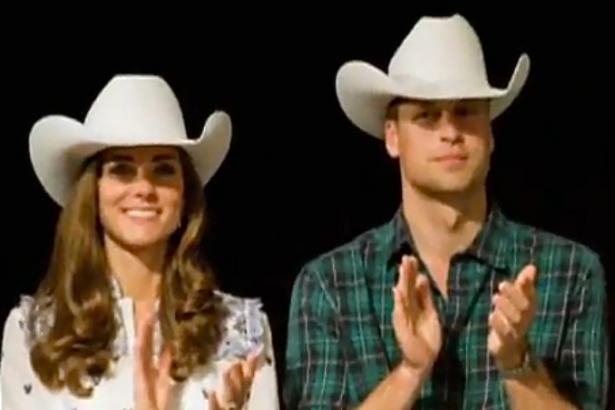 Photo of Prince Wiliam and Kate at Calgary Stampede courtesy of YouTube.

So. A week and a half of royal roadtripping ends. Was it worth it? For them? For us?

Canadian Press has the story on the visit of Prince Willilam has bride Kate, and how the goals of their first official trip abroad were met.

TORONTO -- The unwritten agenda for Prince William and Kate's inaugural tour was every bit as onerous as the official nine-day itinerary, and royal observers say the couple's unspoken triumphs may be even more impressive than their obvious public success.

Historians and commentators said the Duke and Duchess of Cambridge's cross-country travels were driven by three main goals: establish themselves as modern representatives of the monarchy, revive popularity for the institution and bring positive publicity to Canada.

In all three areas, they said, the newlyweds surpassed all expectations.

Royal commentator Rafal Heydel-Mankoo said from London that the couple's status as A-list celebrities was established from their first moments on Canadian soil.

Footage aired around the world showed the prince and his bride reacting with awe to the adoring throngs that turned out to welcome them on the trip that was intended to usher them onto the world stage, he said. Tour organizers likely would have empathized with their surprise, he added.

The royal couple's procession through the streets of Ottawa on Canada Day provided enduring images of the tour's success, he said.

"Nobody thought they would get the rapturous reception that they received. It's exceeded all of their expectations,'' Heydel-Mankoo said. "That's evident from the look on Prince William's face when he was blushing as a beet root when they were chanting, 'Will and Kate! Will and Kate!'''

Heydel-Mankoo said a second key objective would have been to revitalize the image of the monarchy and strengthen Canada's ties with an institution that hasn't always been held in high esteem.

Carolyn Harris, a royal historian with Queen's University, agreed. The enthusiastic crowds that welcomed William and Kate in locales as diverse as the nation's capital, the heart of francophone culture and the land of the midnight sun speak to the couple's success in achieving that goal, she said.

"There have been concerns about Canada's ongoing relationship with the constitutional monarchy,'' she said. "The degree of popularity that the Duke and Duchess of Cambridge enjoys really shows that the institution really has a popular and viable future in Canada.''

Catherine Ellis, a professor of British history at Ryerson University, said the royal couple went to great lengths to show a more modern face of the monarchy.

While she questioned how long the afterglow of the visit would be able to sustain renewed interest in the monarchy, she said William and Kate undoubtedly succeeded in refreshing the image of rigid royal tours of yore.

"The focus has been on the couple's success -- their willingness to meet ordinary people, to change their itinerary, to arrive late, to create a less formal, more approachable image for the Royal Family,'' she said. "It certainly hasn't damaged relations with the monarchy at all.''

Canada's global image was entrusted to the royal newlyweds as they worked their way from coast to coast with a massive cadre of foreign media in tow.

Heydel-Mankoo said scenes of Canada's diverse geographical and cultural attractions, coupled with uplifting images of its residents interacting with the royal couple, represent the best sort of publicity.

"Ignorance about Canadian cities and institutions and geography is abysmal in parts of Europe, so this has been a week-long video for the Canadian tourist board,'' he said.

Ellis questioned whether the largely stereotypical images of Mounties in Ottawa, hockey games in Yellowknife and cowboys at the Calgary Stampede would satisfy Canadians who may wish to project a less colonial image to their royal visitors and their global observers.

"I don't know that they've seen a particularly modern face of Canada. They've seen popular images of Canada,'' she said. "If it was intended to portray Canada in that light to encourage tourism, it certainly might have worked. But as far as the image to the world, it may not be the image that Canadians want to be top of mind.''

Harris said such conventional scenes were offset by visits to a Calgary research lab, as well as the more informal sporting events -- such as dragon boating in Prince Edward Island -- undertaken by the royals.

The organizers' balanced approach to tradition and modernity was reflected in the tour itinerary as well as the way in which the royals engaged with the Canadians they met, she said.

The couple themselves appeared to enjoy the trip, a fact confirmed Thursday in Calgary during William's final speech.

"In 1939, my great grandmother, Queen Elizabeth the Queen Mother, said of her first Tour of Canada with her husband, King George VI: 'Canada made us'. Catherine and I now know very well what she meant,'' he said while sporting jeans and a white cowboy hat.

"Canada has far surpassed all that we were promised. Our promise to Canada is that we shall return.''

Heydel-Mankoo said the royal couple's evident enjoyment of the visit was the crowning glory on a trip that satisfied all but the most staunch opponents of the monarchy.

"The only people who are going to be upset about this tour are republicans, who must be fuming,'' he said.

A staple of Calgary Stampede style gets a royal twist