The royal love-in continues -- and the feeling is mutual, say newlyweds

The touring twosome have "fallen in love" with Canada, spokesman says. 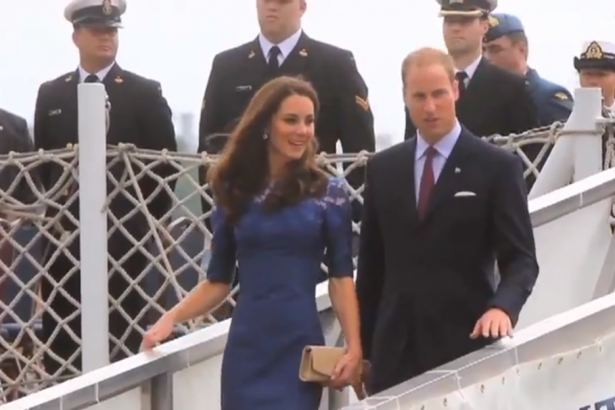 As Prince William and Kate begin their full day in Prince Edward Island at the site of the Charlottetown Conference that laid the foundation for the birth of Canada, the royal love-in continues.

They newlyweds were out early at Province House, P.E.I.'s legislature and the site of the historic meeting some 146 years ago that paved the way for Confederation.

Several thousand people gathered outside the building, a sea of small Canadian flags under slightly overcast skies -- one of them calling out to Kate a suggestion that she be able to "borrow your outfit".

The cheering, waving spectators were typical of the reaction that has greeted the young royals during their first official trip abroad.

And how do they feel about us? Canadian Press has the story:

QUEBEC -- A spokesman for Prince William and Kate says the royal couple have "fallen in love'' with Canada and even consider the protests against them an example of the country's characteristic complexity.

That diversity was on full display Sunday as the couple completed the two-day Quebec leg of their tour and landed in Prince Edward Island.

Sophia Best, 10, wearing a multicolored blue flowered sundress, presented flowers to the duchess moments after they stepped off the plane and worked their way down a line of dignitaries under clear blue skies and a gentle breeze.

Sophia said "Hi'' and Kate said her dress was beautiful and asked her name. "I feel great,'' she said with a broad grin.

Bridget Goodwill, 10, wearing a peach and pink sundress also presented the duchess with a small bouquet.

"Kate said she was so happy to be on this pretty little island and that, through the window of the plane, it looked really good,'' said Bridget.

The prince also shook hands with the girls who won the chance to meet the royals through a poster contest.

The weekend in Quebec began with protests that saw people chanting hostile slogans and occasionally making crude gestures at the royals' passing motorcade; on Sunday a pro-independence group even got a plane to fly overhead dragging the banner, "Vive le Quebec libre.''

But that same visit ended with a scene of unbridled enthusiasm as hundreds of people cheered from a hilltop in suburban Quebec City, chanting William and Kate's names, pleading with them to shake their hands, and giving them flowers and at least one hand-made greeting card.

The weekend also saw the prince play table soccer at a Quebec City youth centre and engage in long, amicable chats with street kids; stuff cucumbers at a cooking class with Jean Charest and tease the premier for the lack of volume in his lobster souffle; and shake many, many outstretched hands.

This was after they were greeted by hundreds of thousands on Canada Day in Ottawa and spent the afternoon, alone, at the prime minister's idyllic country residence at Harrington Lake, Que.

"They've had a superb time so far,'' Miguel Head, the royals' press secretary, told The Canadian Press on Sunday.

"They've very much fallen in love with the country.

"They've enjoyed everything they've seen and they've been very bowled over by the warm welcome they've received everywhere.''

As for the protests: "What they've seen in Quebec, (and) in Montreal the last two days is, for them, just part of the rich fabric of Canada and in no way detracts from how much they respect and admire the country.''

He made the comments just before the royals arrived at an old fort in Levis, Que., where hundreds cheered loudly and chanted sentiments of love for the royal couple just before they left for Charlottetown.

"This is historic,'' Jolicoeur said. "You don't often get to meet a princess. She was so nice. She took the time to speak to my two daughters.''

The fluently bilingual Anne Catherine said Kate told her that she liked the flower in her hair. The little girl replied by telling Kate she was an inspiration -- "because I (also) want to be a princess.''