Toronto Pride parade draws a million revellers. Mayor Rob Ford was not one of them.

City's top dog sticks to decision to spend the holiday at his cottage, leaving party-goers less than impressed. 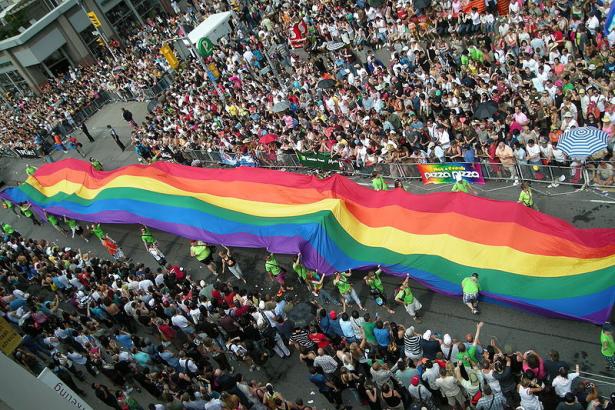 Is it smart of the mayor of Canada's largest city to do a disappearing act just as the annual Pride parade hits town?

Critics of Toronto Mayor Rob Ford say no. And they point to the million people who jammed city streets Sunday, and the millions of dollars they spent, as evidence.

Canadian Press has more on the story:

The crowd whistled and cheered as the Pride parade's colourful floats -- many covered in balloons and blaring Lady Gaga music -- winded down Yonge Street under the blazing sun.

"Canadians know how to rock,'' said Andres Fagundez, who came from New York City with his partner to take part in the Pride festivities.

"This kind of crowd, this kind of people celebrating ... this is something you don't see in many other places.''

People pressed five-deep against the barriers to watch bare-chested dancers, a blue-sequinned marching band and drag queens strut to the thumping music.

Police officers also took part in the parade, driving down in a cruiser bearing a rainbow flag, the symbol for gay rights.

Still, one person was noticeably absent from the crowd: Toronto's mayor, Rob Ford.

In the lead-up to Pride Week, the city's annual gay rights festival, the mayor came under fire for saying he would skip the parade to honour a family tradition of spending Canada Day weekend at his cottage.

But Ford hadn't ruled out attending other Pride events and some wondered if he would make a surprise appearance at Sunday's celebrations.

Ford's office told reporters Sunday he planned to stay at the family's cottage.

Some revellers at the parade said they were disappointed by the mayor's decision.

"I think it's stupid for him not to be here,'' said Esther Freeman, 21, who watched the parade with friends and danced to the music coming from the floats.

She said it's the mayor's responsibility to attend all major events in the city. "He's supposed to represent who Toronto is and Toronto is everybody.''

Ford is the first mayor in years to miss the parade.

Former mayors David Miller, Mel Lastman and Barbara Hall all marched in the Pride parade, which attracts more than one million people and pumps millions of dollars into the Toronto economy.