Combat ends but battle rages on for wounded Canadian troops 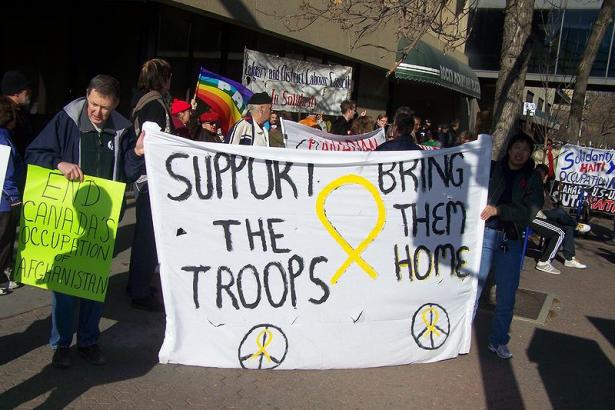 As the much-debated deadline looms for withdrawal of Canada's combat troops from Afghanistan, there is a general sense that with the deadline will come an end to the damage soldiers suffer.

But the longterm effects -- physical and mental -- will linger for many.

Here's The Canadian Press story on the afterlife of war wounds for Canada's troops:

In the frenzied moments after he and his sergeant were sprayed by a volley of accidental fire as they prepared to go out on patrol in Kandahar city, Coles lay in the dust and thought maybe he hadn't been hit at all.

Then he remembers pulling his hands away from his leg to see it covered in blood. The bullet had hit him above his left knee, ricocheted off the bone, and ripped an exit through the other side of his leg. En route, it broke his femur and tore through a vein.

Beside Coles lay the sergeant, his legs and abdomen riddled with bullets, bleeding from his femoral arteries.

"Right away, you do think you're going to die -- I mean, when someone gets shot in a movie they die, right? Everybody knows that,'' said Coles, a wise-cracking soldier from Chilliwack whose life experiences belie his 20 years of life.

But the realization soon dawned that help was close at hand, since the two soldiers were still inside the confines of the Canadian base at Camp Nathan Smith, with medics and a field hospital close at hand.

"At first, you know -- 'OK, all right, I'm not going to die, I'm just going to lose my leg,' and then you try and cope with that,'' Coles said. Had they not been on the base, the sergeant would likely not have survived, he added.

Coles and his sergeant -- the two of them are still recovering from the "friendly fire'' incident in February 2010 that nearly took their lives -- were among the more than 1,800 Canadian soldiers wounded in Afghanistan as of the end of last year.

By the time the combat mission ends next month, that number will surely be higher.

Of those, 615 troops were wounded in action by improvised explosive devices, mines, rocket attacks and direct fire, as well as friendly fire related to combat action and "acute psychological trauma directly attributable to combat action that required medical intervention.''

Not all wounds are easy to see.

Yan Berube joined the military straight out of high school, alongside his best friend, Ainsworth Dyer. The two young men served their first overseas tour in Bosnia, and found themselves in Afghanistan in the first wave of Canadian soldiers after Canada joined the coalition.

Dyer was one of four Canadian soldiers killed April 18, 2002, when a U.S. F-16 fighter mistakenly bombed them on a pre-dawn training exercise. Dyer, Sgt. Marc Leger, Pte. Richard Green and Pte. Nathan Smith were Canada's first casualties of the war.

Berube later returned to Afghanistan in the full throes of what the military calls operational stress injury, more commonly known as post-traumatic stress.

He had two near-death incidents during that second tour, said his lawyer Dennis Evans, who spoke to The Canadian Press on behalf of his client in hopes of raising public awareness of his plight and that of others like him.

"He was basically trying to kill himself,'' said Evans, who came face to face with the fallout from Berube's invisible wounds when his legal saga played out in a B.C. courtroom, garnering extensive local media coverage along the way.

Upon his return to Canada, Berube was released from the Canadian Forces and diagnosed with post-traumatic stress disorder. Now living in a small town on Vancouver Island, Berube abused alcohol and drugs, didn't sleep and didn't leave his house, Evans said.

Berube did seek help, and through Veterans Affairs had a nurse who came to his home five days a week and a psychiatrist he met with once a week.

According to court documents, a thief broke into Berube's home and stole his military service medals. His life went careening out of control. His psychologist wrote a letter to Veterans Affairs urging immediate psychiatric help, but two days later it was already too late.

Berube, accused of threatening the man he believed responsible for stealing his medals, had a gun and wanted to die. A nurse who visited him at his home realized he was suicidal.

`"There he was, he had this loaded gun, although he wasn't pointing it at her or anything like that, but he said he was going to kill himself with it or he was going to force the police to do it,'' Evans said.