Brave souls will be harnessed in for hands-free along 1.5-metre-wide ledge around tower's pod, 356 metres above the ground. 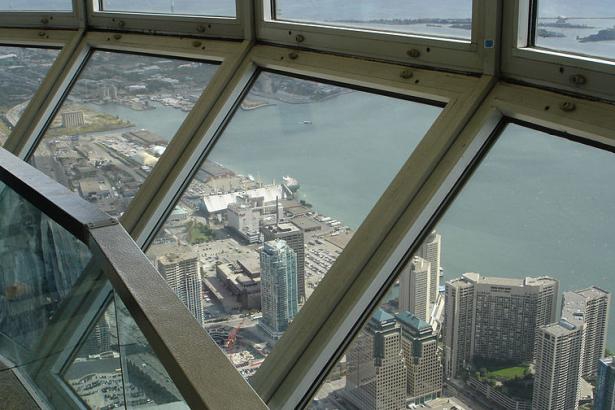 TORONTO -- As if the view from the top of the CN Tower isn't thrilling enough, people will soon be able to walk around the ledge outside.

The famous Toronto landmark is offering a new attraction this summer called EdgeWalk.

Thrill-seekers will be able to walk hands-free along a 1.5-metre-wide ledge around the top of the tower's main pod, 356 metres above the ground.

They'll be wearing safety harnesses attached to an overhead rail and trained guides will lead the adventurous walkers in groups of six to eight.

Those brave enough to walk the walk will be rewarded with some breathtaking open-air views of Toronto and Lake Ontario.

The entire experience will run about 90 minutes, with the walk itself lasting 20 to 30 minutes.

Walkers will have to meet height and weight requirements, and officials say the attraction was designed with the utmost safety and security in mind.

"EdgeWalk is both thrilling and unique and will push visitors to their limits -- literally and figuratively,'' said Mark Laroche, president and CEO of Canada Lands Company, which owns and operates the CN Tower.

Advance ticket sales are set to begin in June and officials say the attraction will open in late July or early August. Prices haven't yet been released.