The Harper government has pledged to cut climate pollution. But its plan only covers 13 per cent of the required cuts -- and oil sands pollution will more than wipe out even that gain. 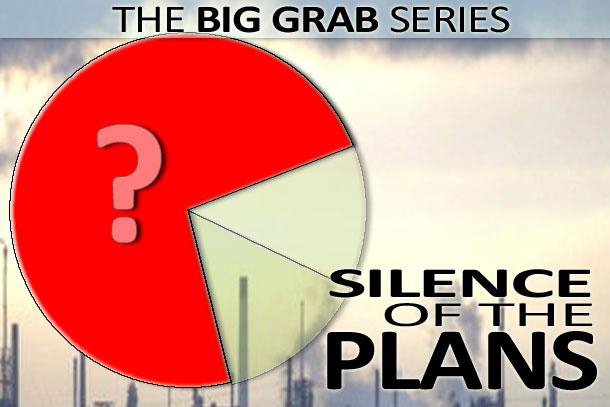 On Jan. 29, 2010 Prime Minister Stephen Harper formally committed Canada to cutting our climate pollution by 17 per cent from 2005 levels … and doing so by 2020. This Copenhagen Accord pledge is explicitly linked to the targets and actions of the U.S.

Harper has also been in power for all of the five years so far covered by his pledge. Environment Canada says that all of the Harper government plans announced over these five years will prepare our economy to meet just 13 per cent of Canada’s 2020 commitment.

“Climate change is one of the most serious environmental issues facing the world today … Canada has a credible plan for addressing our environmental challenges. And we are well advanced in executing that plan … a comprehensive plan to achieve real emission reductions in the short, medium, and long terms … [we have an] unwavering commitment to succeed …  What many people don't realize is that Environment Canada already has the legal tools it needs to execute our plan. It requires no new legislation”

While Kent gave a rousing defence of the Harper government’s “unwavering” commitment and “comprehensive” plan, his own Environment Canada ministry released a backgrounder that showed: 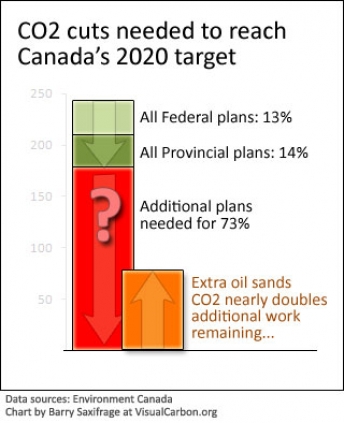 …and oil sands erase all gains

Environment Canada and others estimate that oil sands corporations plan to increase CO2 pollution by 78 Mt above their 2005 level. This is 82 Mt above their equal share of 17 per cent below 2005.

These climate pollution increases are so huge they will overwhelm all savings from all proposed federal and provincial actions to date. The 65 Mt in nationwide CO2 cuts will be more than erased by 78 Mt in CO2 increases from the oil sands.

Put another way, the planned rise of oil sands pollution nearly doubles the size of the remaining actions Canadians need to come up with by 2020.2 The oil sands 82 Mt increase is nearly half of the 178 Mt of cuts still needing action.