Koch spends tens of millions trying to shape federal policies that affect their global business empire.  The Center for Public Integrity digs deep into the Koch's influence and finds it extends beyond  the highest levels of U.S. government to Canada and Europe. 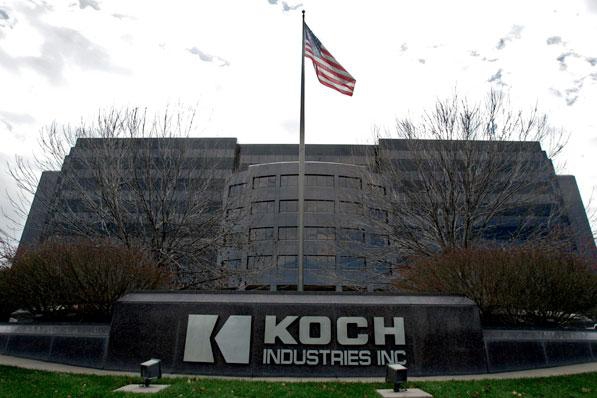 At an EPA hearing last summer, representatives from Koch Industries argued that moderate levels of the toxic chemical dioxin should not be designated as a cancer risk for humans.

And when Congress moved to strengthen regulation of the financial markets after recent collapses, Koch Industries — a major commodities and derivatives trader — deployed a phalanx of lobbyists to resist proposed changes.

Charles and David Koch, the owners of the country’s second-largest private corporation, are libertarians of long standing, who contend that government regulations, taxes and subsidies stifle individual initiative and hamper American competitiveness. In recent years, the Kochs have played an increasingly public role as financial angels for conservative causes, politicians and foundations

What’s not so well-known is the activity of Koch Industries in the trenches in Washington, where a Center for Public Integrity examination of lobbying disclosure files and federal regulatory records reveals a lobbying steamroller for the company’s interests, at times in conflict with its public pose.

The money that Koch (pronounced “coke”) has spent on lobbying in Washington has soared in recent years, from $857,000 in 2004 to $20 million in 2008. The Kochs then spent another $20.5 million over the next two years to influence federal policy, as the company’s lobbyists and officials sought to mold, gut or kill more than 100 prospective bills or regulations.

Oil is the core of the Koch business empire, and the company’s lobbyists and officials have successfully fought to preserve the industry’s tax breaks and credits, and to defeat attempts by Congress to regulate greenhouse gases.

But Koch’s diversified interests, and thus its lobbying activities, extend far beyond petroleum. Koch companies trade carbon emission credits in Europe and derivatives in the U.S. They make jet fuel in Alaska from North Slope oil, and gasoline in Minnesota from the oil sands of Canada. They raise cattle in Montana and manufacture spandex in China, ethanol in Iowa, fertilizer in Trinidad, nylon in Holland, napkins in France and toilet paper in Wisconsin.

According to the most recent Forbes magazine rankings, Koch had $100 billion in revenues in 2009 — on a par with corporate giants like IBM or Verizon — and stood a close second to Cargill Inc. on the list of the largest private US companies. The firm has 70,000 employees, and a presence in 60 countries and almost every state.

Koch’s decision to pour millions into lobbying Washington has put them high on the list of corporations whose lobbyists work the corridors of the nation’s capital. Last year, Koch Industries ranked in the top five — roughly on a par with BP and Royal Dutch Shell — in lobbying expenses among oil and gas companies, according to the Center for Responsive Politics.

These totals do not include the work of the trade associations that Koch uses to represent its interests in Washington. There’s a major  industry group called  the National Petrochemical & Refiners Association, and obscure organizations like the green-sounding National Environmental Development Association’s Clean Air Project, whose membership lists Koch and two of its subsidiaries (Georgia-Pacific and Invista) with a dozen industrial giants like ExxonMobil Corp., General Electric Co. and Alcoa Inc.

Koch’s lobbyists are known on Capitol Hill for maintaining a low profile. There are no former U.S. senators or House committee chairmen on the payroll. The firm had 30 registered lobbyists in 2010, many of whom are Washington insiders with previous experience as congressional staffers or federal agency employees.

Gregory Zerzan is a good example. Zerzan was a senior counsel for the House Financial Services Committee before serving as an acting assistant secretary and deputy assistant secretary at the U.S. Treasury Department during the George W. Bush administration. Zerzan then worked as counsel and head of global public policy for the International Swaps and Derivative Association before joining Koch Industries as a lobbyist.

Koch clout is augmented by campaign donations to parties and candidates for federal office — $11 million in the last two decades, according to the Center for Responsive Politics — and generous gifts from three family foundations to universities and conservative organizations and interest groups.

According to IRS records, the Koch foundations are essential donors (having given $3.4 million from 2007 through 2009) to the Americans for Prosperity Foundation, a nonprofit known for its support of the Tea Party movement. Among the organizations that have each received a million dollars or more over the last five years from Koch foundations are the Cato Institute, the Heritage Foundation, and two conservative think tanks at George Mason University in Virginia: the Institute for Humane Studies and the Mercatus Center.