Her ‘crime’ was different, having a relationship with and then marrying a Chinese man, but the result the same. Thrown in jail, stripped of citizenship and child, and forced abroad, Demerson offers a historical perspective on sexist laws that still deny Canadians their right to nationality. Another segment in the Vancouver Observer's Lost Canadian series shines light on a tragedy that has yet to be apologized for by the government. 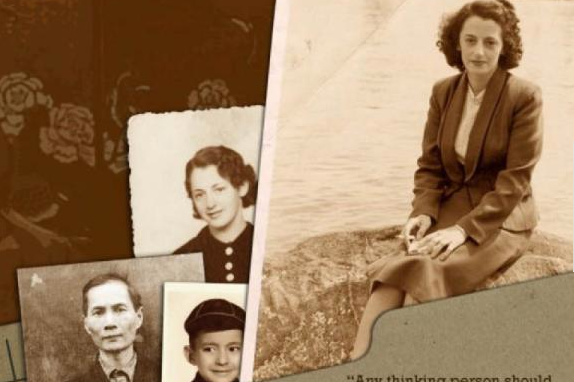 Pictures of Velma Demerson as a young woman, her first Husband, Harry Yip, and her young son from the cover of her book, Incorrigible.

Lost Canadian Velma Demerson’s days of looking over her shoulder ended in 2004 when she was returned her Canadian citizenship after more than six decades of being a pariah. More than six years on, Demerson continues to be a voice for Canadian women who remain victims of discriminatory laws still on the books. Laws like the 1947 Canadian Citizenship Act, which denies women like Jackie Scott Canadian citizenship because she was born out of wedlock.

“I don’t know why the Canadian government is so adamant about things like that. For what reason? They are still under that old fashioned law where women are treated as children. There are women in this country who are stateless. The only time they find out is when they go to apply for a passport and then they find out the way that I did.”

As a young woman, Demerson was arrested under the 1897 Ontario Female Refuges act for being “incorrigible.” Until it was repealed in the 1960’s the law stated that a women, 16 to 35, could be arrested and institutionalized if they were found pregnant, out of wedlock, or drunk in public. Eighteen years old in 1939, Demerson was caught at the home of her Chinese lover, Harry Yip, and taken into custody.

She writes in her book about the first months of her internment:

“I don’t think about my fiancée anymore. My loyalties have dissolved in a sea of turmoil. I am still in shock. I will never think of sexuality…No one ever told me that I’m carrying a human being inside of me and I don’t acknowledge its existence. There’s a silent conspiracy to undermine that reality since I have antagonized the state by my monstrous behavior.”

Demerson was sentenced to ten months at Ontario's infamous Mercer Reformatory for Women. There, she said attending physicians performed eugenics testing on her and her unborn child, tests Demerson believes cost the health of her son and sent her down a path of despair and tragedy.

“I never quite recovered from what happened,” she said on the phone to the Vancouver Observer.

After her release from the Mercer Reformatory, Demerson was further punished, this time by the Federal government, for marrying the man she loved. Under yet another antiquated law, Demerson assumed the nationality of her Chinese husband, a legality she discovered when she applied for her first passport in 1948.

“I was told I was Chinese. And that I should apply for Chinese citizenship.”

Demerson then visited the Chinese embassy, only to be denied by them as well.

“Their attitude was of surprise. Perhaps no other Canadian women had gone there before. And they just treated me politely but then they eased me out the door and that was the end of it.”

She was officially stateless until 2004.

“I lost my son over this citizenship business,” Demerson says about the series of decisions she made in the wake of her treatment at the hands of the Canadian government.

After her denial in 1949, Demerson left Ontario to BC, where she applied for a passport under her maiden name, and was granted the document (records were not readily shared between offices until recently).

“I was subject to five years in jail if the government found out about it...you know, a false application. So I was scared every time that I left the country that I would get caught.”

She used her maiden passport to take her young son to Hong Kong, where she hoped he could have a better life away from the discrimination of Canadian society.

“If you were half Chinese and didn’t speak Chinese, you’d be called siwash and that was a derogatory term. I didn’t want him to belong nowhere, and he certainly didn’t belong in Canadian society. If he couldn’t fit into the Chinese, he would be a real a outcast.”

That decision turned out to be a tragic one.

Demerson’s marriage fell apart under the strain of her pariah status, and unable to make ends meet in Hong Kong, she sent her son home to his father in Canada without her. Upon return a year after, she discovered her son had been placed into state care. She was never allowed to raise him. The two never reconciled. He drowned at the age of 26.

Demerson’s story is an affront to the idea of what Canada is. But states, like people, are often never as good as they think they were. While the government today continues to correct past wrongs, many women are still subject to outdated laws like those once applied to Velma Demerson. Read more of their stories here.

Canada's first citizenship act came into effect on January 1, 1947, and was a product of its time.  Discrimination was legal, particularly against women and children.  Today Canadian citizenship is based on 1977 legislation, which means that citizenship in Canada is not necessarily Charter compliant.

Huge inequalities still exist where women can have fewer rights than men,where  people born prior to 1947 may not actually be Canadian citizens, where the government can still deny citizenship because a person was born in or out-of wedlock, as well as several other archaic reasons.

"Thousands of unsuspecting Canadians remain at risk," said Don Chapman, an activist who fights tirelessly for the restoration of rights."

"Not just loss of citizenship but also pensions and other benefits.  There's even a way that a Canadian citizen can give birth to a stateless child.  Welcome to the world of Canada's Lost Canadians," Chapman said.  Find more information on this issue here on Champman's site and here for Vancouver Observer's Lost Canadian series