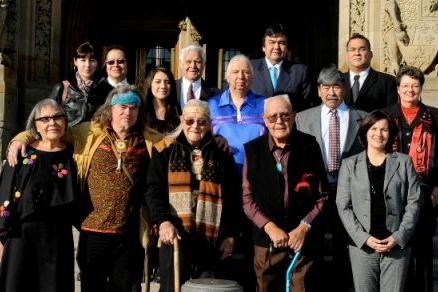 Reaching out to aboriginal youth to help guide students who have left secondary education is the Rivers to Success program. It helps students in furthering continuing educational goals with assessments of personal interests, strengths and talents.

This years awards were presented in Regina Saskatchewan and the evening was presided over by Andrea Menard (Rabbit Fall) & Raoul Trujillo (Apocolypto). Since it's inception in 1993, NAAF's goal specifically recognizes and supports career excellence in First Nations, Inuit and Metis peoples from across Canada.

With a deadline for nomination entries in September 09, the fourteen 2010 recipients were announced in November under the categories:

Youth:  Kahnawake nation's, Skawenni:io Barnes for her work since the age of 13 collecting books for the library which now bears her name; is currently a Political Science student at Yale University.

Culture, Heritage & Spirtuality:  Siksika nation's, Tom Crane Bear is a spiritual leader and international teacher of the cultural ways of the Blackfoot people.