Is this the beginning of the end for China's English frenzy? 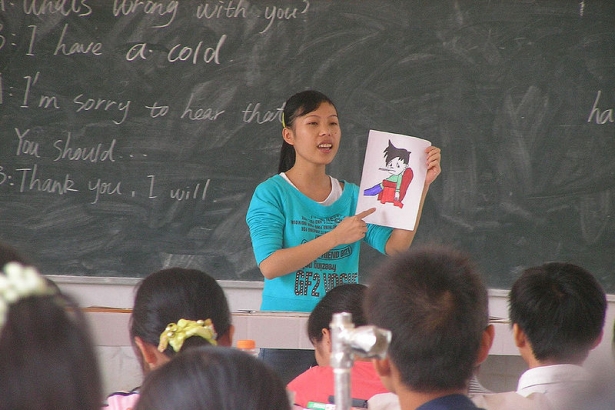 Canadian nationals looking for easy employment in China may no longer find positions at Beijing and Shanghai's countless English language schools, after one legislator at the National People's Congress (NPC) decried what is believed to be a “crippling” obsession with English instruction Monday.

English is an educational means, not an end, NPC official and director of the Institute of Information Studies Zhang Shuhua argued at the country's annual policy-making event, according to a report from Sina News.

“Some education departments are putting the cart before the horse,” Zhang argued, “While focusing their studies on English, students suffer, neglecting their normal courses, in what is a crippling blow to the Chinese education system.”

A fixation with English does not only threaten the quality of education in the People's Republic, Zhang said, but also the nation's own linguistic identity.

“The Chinese language is also suffering an unprecedented crisis.”

Over the past several decades, Chinese academic culture has been swept by what analysts have termed an English frenzy, in Chinese 英语热 (yingyu re－ literally English hot).

Many students who dream of studying abroad feverishly study English. High-level jobs at international companies demand that prospective employees have a strong command of English. The national college entrance examination or gao kao has a foreign language component -- Most students opt to take the English language exam, although it is also available for French and Russian.

In recent years, as China's partnerships with countries in the Middle East and Africa have grown, so too have university Arabic and French language departments. Still, many Chinese consider English to be the world's lingua franca – foreigners of non-anglophone nationality are still often greeted with a hopeful Hello.

China isn't the only country concerned with the ramifications of an overwhelming obsession with English.

The first international civil society conference on French language and culture – the Forum mondial de la langue francaise – was held in Quebec in July of last year, with the aim of preserving French-speaking culture from the prevalence of English, particularly among international youth.

The conference was preceded by an Online petition that aimed to set the agenda and tone of the event. It called for more innovation in the French language to combat English borrow words used for Internet functions as well as scientific and technological innovation.

The petition's signatories came from far-flung parts of the former French Empire – from Cameroon to Algeria to Lebanon – all devoted to maintaining the dominion of French in public and private correspondence and media.

Zhang Shuhua's stand against China's English frenzy has taken center stage at the NPC, but has yet to penetrate Chinese academic and social circles as it has with francophone counterparts. National media is abuzz with Zhang's claims, but in over a day, the hot topic Zhang's speech prompted on social media site Sina Weibo has generated a modest 71,668 comments on the 400 million-strong site.