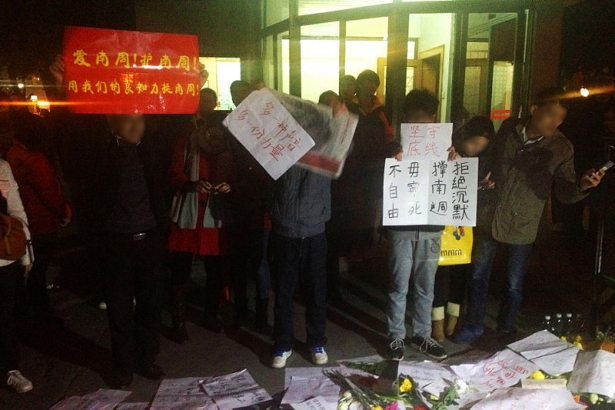 Witty puns aren't the only way Chinese dissidents are circumventing censors on the Internet.

While keywords referring -- both directly and cryptically -- to Southern Weekend and an ongoing debate around Chinese press freedom remain restricted on the Chinese social media site Sina Weibo, it seems it's what netizens aren't saying that's subversive.
Over 511,000 Weibo users have used the term 东西北 (Dong Xi Bei -- East, West, North) over the past few days. The term is often coupled with mention of five-day weeks.
Note that the omitted direction is South. Note that five day weeks might omit a weekend. Yes, they are talking about Southern Weekend through the holes in their discourse.
This latest clever Chinese Internet meme started when former president of Google China, Kaifu Lee, was reprimanded by authorities for commenting the Southern Weekend incident.

"From now on, I will only discuss East, West and North (...) Monday through Friday," Lee wrote to his 25.5 million followers on Weibo after reportedly being "asked to tea," a euphemism for a much less friendly run-in with authorities.

"You've become the next East, West, North, Monday through Friday. God, this is like deja vu. It's like we're going back in time 46 years," wrote user Jr_Achilles, his very specific number of years referring to when the seldom-discussed Cultural Revolution started.

Weibo user Solo994, whose avatar is a picture of Southern Weekend's signature chop logo, offers a link to the Wikipedia page on the Southern Weekend incident, writing, "Wikipedia's entry on East West North [Link], keep it as a souvenir."

Solo994's Weibo tagline is: "Satan, your kingdom must come down."

Lee's meme illustrates how dynamic the Chinese netizen's game of words can be, and is perhaps a triumph and tribute to the cunning of Chinese and international dissidents, artfully skirting the rules. But Beijing's recent crack down on Southern porridge, another meme used to continue the debate on Chinese press freedom, shows it's not easy to pull a sly one past Chinese censors.
If I know that 511,000 Weibo users are writing about every direction but the South and only weekdays, Chinese authorities are likely well aware of what's going on themselves.

Why is Beijing OK with this and not other memes?

Firstly, 511,000 Weibo messages pales in comparison to nationalistic messages on the ongoing Diaoyu-Senakaku Island disputes with Japan, which are fast approaching 62 million. Dissent in small volume doesn't upset Chinese censors. According to Chinese law, small music production companies producing a few thousand CDs don't need to pass their product onto censorship authorities for review. That law represents a relitively untapped potential for aspiring Chinese dissident artists. That's likely the principle behind the survival of East, West, North.
As Chinese friends often observe, Beijing perennially needs to let off steam from its societal pressure cooker to prevent everything from boiling over.

Perhaps East, West, North, Monday through Friday is China's way of poking a small hole in its pot -- rather ironically letting dissidence exist only where it does not exist at all.
MH
---
SinoFile is The Vancouver Observer's daily series on Chinese affairs, including analysis of the nation's business, politics and society, with a focus on international media coverage, Chinese and foreign social media and original interviews with China's movers and shakers.
Read More:
Share on Facebook Share on Twitter