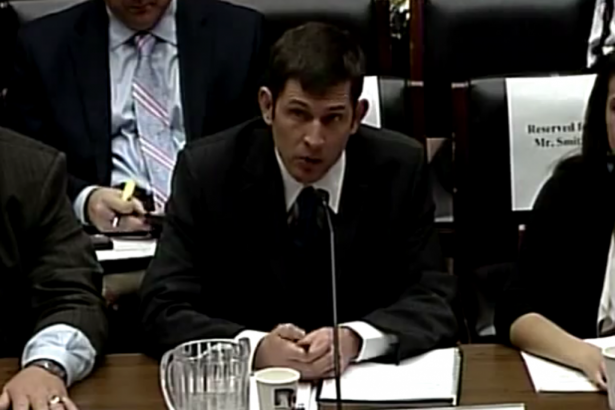 During a U.S. House Energy and Commerce Committee hearing Tuesday, Canadian environmental advocates from Greenpeace and the Pembina Institute shared their compelling testimony regarding Alberta’s oil sands. Despite the hearing’s focus on “successes” in reducing oil sands industry impacts, Pembina policy director Simon Dyer and Greenpeace campaigner Melina Laboucan-Massimo both agreed that it was a step in the right direction.

“I think it was good,” said Dyer, on the phone from the airport in Washington, D.C.

“I think ultimately, it’s important for us to be having this discussion,” added Laboucan-Massimo.

“For tar sands issues and pipeline issues to be heard in the U.S. Congress I think is a positive step forward to the type of discussion we need to have, around what the impacts are for tar sands and the associated infrastructure projects like the Keystone XL and the Enbridge pipeline.”

After the House Committee hearing, congress members touted Canada’s dedication to “responsible development” of resources, and credited government-industry partnerships for the great strides made in reducing negative impacts.

“What we have learned today is just how successful Canadian efforts have been to decrease the environmental impacts from oil sands through technology, even as production increases,” Republican Congressman Ed Whitfield said in a release.

“The difference in what Canada is accomplishing, and what is taking place in the United States is clear. Canadian regulators seek to make energy production safe, while the Obama administration’s regulators often seek to make it impossible. America can and must increase its domestic energy production, and there is much to learn from the Canadian experience as to how we can get there.”

Whitfield referred to Canada as an example of “energy policy done right”, and emphasized the need for Americans to learn from our country’s experience when it comes to domestic oil and gas production. However, Democrats like U.S. Representative Kathy Castor made sure to address the importance of ongoing environmental concerns, the potential costs to the climate and to communities.

With other witnesses focused on improvements in the industrial process, Dyer said his job was to fill the gaps and speak to some of the public’s broader concerns—such as the oil sands’ impact on climate change, and the inability of regulation to keep up with development.

“I think there’s still a bit of a disconnect between the industry witnesses talking about the per-barrel impacts and sort of the broader issue that’s of concern to the communities and stakeholders on the ground, which is the cumulative and total impact of development. So I think that was brought out in my testimony and in the testimony of Melina Laboucan-Massimo,” Dyer explained.

“Clearly there’s still a lot of concern around the oil sands’ environmental management. It’s clear to me that despite the significant amount of resources that the government of Canada and Alberta are spending in public relations materials…I think there are still some very serious concerns that the Americans have reflected in their representatives here that haven’t been addressed. So we’ll continue to talk about solutions and the need for policies to drive those solutions.”

The community perspective on oil sands

Laboucan-Massimo—whose passionate speech in Vancouver last November moved audience members at a local anti-oilsands pipeline event—used her testimony in the House to emphasize the environmental and social repercussions of oil sands development. She has experienced these consequences firsthand, as a member of the Lubicon Cree First Nation in Northern Alberta, where an oil spill last year devastated the community and caused serious harm to many residents.

“I think the people that are feeling the impacts on the ground aren’t really that comforted by the fact that industry’s saying there are certain technologies that will solve the problems,” said Laboucan-Massimo.

“There are serious underlying problems and repercussions that we’re seeing now, and we’re not seeing improvements as quickly as we need to. People in the region are experiencing elevated rates of cancers, respiratory illnesses, health ailments, as well as what we’re seeing done to the land and to the water. Talking about potential techno-fixes that might happen in 20 to 30 years, I don’t think is all that reassuring when we’re dealing with the kind of life and death situation of today.”

Representing the “minority” perspective in a Republican-led committee, Dyer said there was definitely some disagreement between the environmental and industry witnesses. However, he emphasized the significance of the hearing as an opportunity to share Pembina’s research and enlighten politicians from both sides.

According to Laboucan-Massimo, it was also an opportunity to introduce American policymakers to a side of the oil sands story they may not have considered.

“I think it was important to have a community perspective, from someone who actually lives in the north of Alberta, because sometimes we don’t see that happening,” she said.