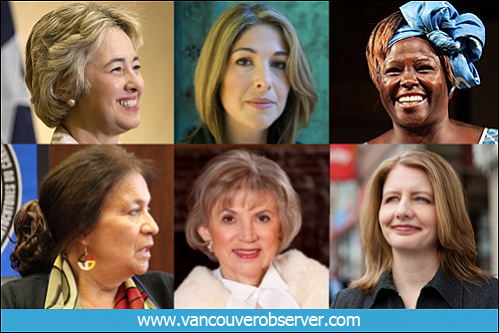 Women make up over half of the world's population. But millions of women around the globe continue to face formidable challenges in their daily lives. From violence and sexual abuse to workplace discrimination, or the striking rate of women in poverty, it’s clear that there’s still a long way to go.

This week, in honour of International Women’s Day, The Observer is putting the spotlight on a few extraordinary and influential women who are using their unique skills to overcome challenges, break through barriers and make a difference both here in Canada and all over the world. These strong, devoted female figures have all done exceptional work in their fields—in science, philanthropy, journalism, law, business and politics.

By acknowledging their successes, other women may be inspired to dream a little bigger, work a little harder and achieve things they may have never thought were possible.

No one embodies these qualities more than Canadian-born journalist Naomi Klein.  Klein has inspired millions with her groundbreaking perspectives on capitalism, human rights, and culture.

In her first book, No Logo, she took readers inside sweatshops, creating a powerful image of human rights abuses and the frightening realities of commercialism and globalization. In Shock Doctrine, another international bestseller, she explored the economics of disaster with compelling, on-the-ground accounts of exploitation in the face of catastrophe.

There’s no question that what Naomi Klein does takes guts. She writes about things that others don’t have the courage to address, and that many don’t agree with. The worlds she unveils are full of cruelty, and it’s important that they be seen.

Of course, Klein’s realm of expertise goes much further than capitalism and globalization—over the past year she has been an increasingly vocal advocate for environmental issues, particularly concerning controversial oil pipeline projects and ecologically-damaging operations in the Canadian tar sands. She was one of many outspoken protesters who was arrested at the White House in a 2011 protest against the Keystone XL pipeline, and has also appeared at anti-pipeline events in Vancouver regarding the proposed Northern Gateway project.

With worldwide unrest bubbling up to the surface in the form of new movements like Occupy Wall Street, now is the time for engaged citizens to get educated and take action. And it’s women like Klein who are helping to move the masses.

Approaching economics from a different angle from Klein is Vancouver’s own Tamara Vrooman. Vrooman became CEO of Vancity when she was only 38.  No wonder she has been named one of “Canada’s Most Powerful Women” by the Women’s Executive Network Top 100. Not only has she broken through the so-called "glass ceiling", she is also one of the few top executives in the banking sector whose focus is not on the money but on strengthening communities through positive social and environmental change.

As the CEO of  the largest credit union in Canada, Vrooman has developed a unique vision of banking based on social values. Under her leadership Vancity became the first Canadian financial institution to be asked to join the Global Alliance for Banking on Values. It was also the first North American credit union to achieve carbon neutrality, as a result of Vrooman’s dedication to sustainability.

After a stint as B.C.’s Deputy Minister of Finance and as the CEO of the Public Sector Employers’ Council, Vrooman came to Vancity in the midst of an economic and mortgage-based crisis. But she’s not one to back down from a challenge. She made bold decisions and took criticism with grace. Now, clients and staff tout the credit union’s unique position as both a financial institution and an “agent of change”.

Vrooman has stayed true to Vancity’s public service agenda—whether it’s through the community grant programs that help get innovative projects off the ground, or the enviroFund initiative to support green projects. Such a personal touch on financial transactions is hard to find, and many clients truly appreciate what the unique institution brings to the table.

Of course, any conversation about women in high places must include a shout out to Canadian Chief Justice Beverley McLachlin. She is the first woman to ever hold her title—the highest legal position in the country—and during her extensive career she has commanded respect both in Canada and abroad.