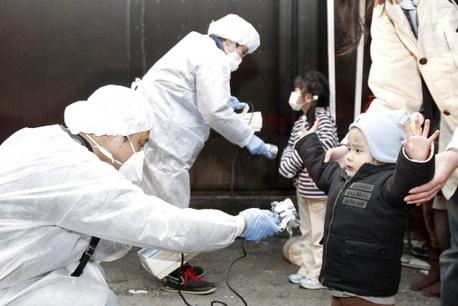 On March 11, 2011, an 8.9-magnitude earthquake struck off the coast of Honshu Island in Japan, but that was only the beginning of a disaster that  continues to unfold today.

The earthquake automatically triggered the shutdown of a number of the country’s nuclear reactors, including the three main reactor units in operation at the Fukishima Daiichi Power Plant. The Fukushima power station was cut off from Japan’s electrical grid, and plant operators at Tokyo Electric Power Co. (TEPCO) alerted government authorities when they found the emergency generators in Reactors 1, 2 and 3 had all failed.

In the following days concerns deepened among officials, workers and residents as the government declared a nuclear emergency and evacuated the immediate area. Pressure inside the reactor units built, and as a result workers were forced to release steam containing radioactive material into the atmosphere. There were several explosions, and to cool reactions and prevent complete meltdown TEPCO started pumping seawater into the reactors.

Reports on the disaster from TEPCO and the Japanese government were consistently vague and unclear.  They sometimes underestimated the damage and  led to a sense of distrust among citizens and the international community. While officials initially avoided the term “meltdown”, the company later admitted that rods inside the reactors had in fact melted in the hours and days after the earthquake.

When it came to evacuating the region, the US Embassy recommended an evacuation zone spanning a 50-mile radius around the nuclear facilities. However, the Japanese government only originally evacuated residents within a 12-mile radius. Over a week after that, they evacuated the area up to 19 miles from the plant. Studies conducted later in the year showed that if Japan had evacuated the region recommended by the US, over two million residents could have been spared the excess radiation as opposed to the 130,000 that were initially evacuated. This info-graphic from the New York Times illustrates the evacuation zones and the effects of radiation at varying distances from the source.

After the event, it also came out that Japan had ignored earlier warnings from the International Atomic Energy Agency (IAEA), which had notified officials in 2008 that TEPCO’s safety measures were not adequate for dealing with earthquake over a certain magnitude.

The foreign press was critical of both the company and government’s response with regards to public communication and clean-up efforts, but Japan’s foreign minister Chiaki Takahashi defended their tactics and accused international media of exaggerating aspects of their coverage.

A month after the initial event, Japan’s Nuclear and Industrial Safety Agency (NISA) announced the official rating of the Fukushima disaster according to the International Nuclear and Radiological Event Scale (INES). Though earlier reports had placed it at Level 4, the event was eventually determined to be a Level 7 accident—making it one of only two in international history to reach the highest level of nuclear emergency (the other being Chernobyl).