Environmental experts say it's "deeply embarrassing" that Ottawa is mulling withdrawal from the Kyoto Protocol. 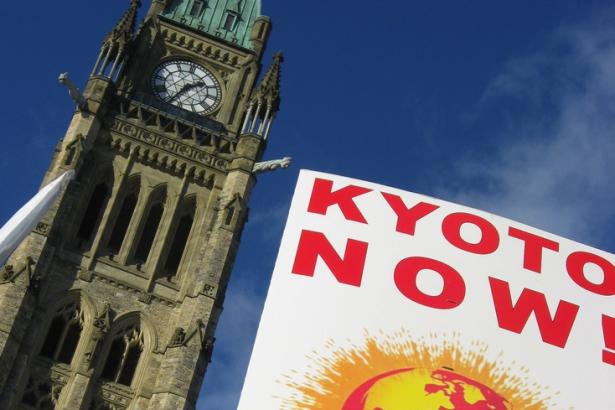 As the international community kicked off the UN climate change summit today in Durban, South Africa, local environmentalists in Vancouver expressed their disappointment at Canada's current position on the Kyoto Protocol.

Earlier, Environment Minister Peter Kent had announced that pulling out of the Kyoto Protocol is “an option” the Canadian government is considering.

“It sends a pretty strong signal that Canada is not serious about the international process being successful. It certainly is not going to be a big positive checkmark on our international reputation.”

A report last night from CTV News revealed that Prime Minister Stephen Harper and his administration intend to withdraw formally from the protocol, but said they will wait until late December to announce it – after the Durban conference is over.

During a press conference this morning announcing the government’s commitment to funding Canada’s clean air program, Kent repeatedly refused to comment on the possibility of a formal Kyoto withdrawal.

"We're going to Durban to work in common cause with the other parties to the convention to advance a new climate change agreement, binding eventually, which will engage all emitters in both the developed and the developing countries," he said.

The Kyoto Protocol, the first legally-binding international agreement to set targets for reducing greenhouse gas emissions, has been called “unfair” by Minister Kent, who is against the exclusion of developing countries like China and India.

While the decision to pull out completely has not been officially confirmed, Canada has already made it clear that the country will not be signing on for new commitments after the first phase of the agreement expires at the end of 2012. Instead, Canada – and a number of other countries including Russia, Japan and the United States – are said to be pushing to delay a new agreement until 2015.

“If we don’t find a way of extending Kyoto, it basically means throwing out all the architecture that’s been built in climate negotiations over the last 15 years. And you’re left with ‘climate anarchy’, as I’ve seen it described,” said Horne.

“If they just throw targets out there and don’t have the systems in place to make sure we meet them, they probably aren’t going to be met.”

Canada has admittedly failed at reaching its original target of a 6 per cent reduction of carbon emissions from 1990 levels. In fact, some reports say by 2009 Canada’s emissions had actually risen to 34 per cent above the target.

Such increasingly discouraging news about Canada’s place in the international climate change struggle has been met with angry responses from activists and environmental groups across the country. But some say the latest developments simply meet their expectations when it comes to the federal government’s policy.

“In some sense, it doesn’t surprise me,” said Tom Green, an ecological economist and Liu Scholar at the University of British Columbia.