The world-famous Harry Potter author tells UK courts how she was constantly violated and harassed by the press. 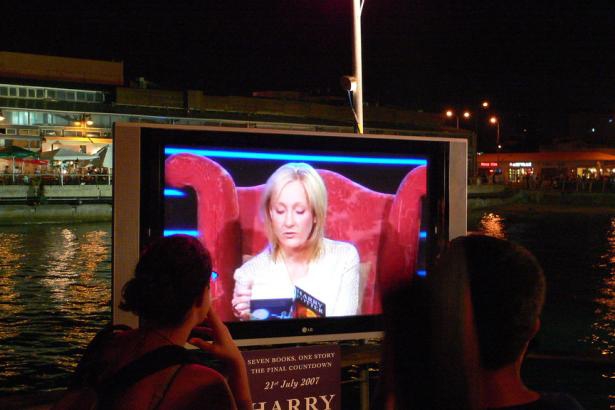 Photo by by Ran Yaniv Hartstein.

Acclaimed Harry Potter novelist JK Rowling testified in a British inquiry today, giving an emotional description of how living under the media’s watchful eye was "like being under siege and like being a hostage".

Appearing at the News of the World media ethics inquiry alongside actress Sienna Miller, Rowling explained how tabloid reporters camped outside her home, deceived her husband into revealing personal details, and even slipped a note into her child’s bag.

“I can’t put an invisibility cloaking device over myself or my house, nor would I want to,” she said, making a clever reference to the wizard-themed series that brought about her fame.

“(But) it feels threatening to have people watching you.”

Rowling said the media attention started with the release of her first book in 1997, and by the time her children were born in 2003 and 2005 it had escalated to the point that she was forced to move, after published photographs revealed the location of her house.

Despite attempts to keep her children out of the media spotlight, she said she was horrified one day when her young daughter returned home from school with a note from a journalist in her backpack.

"I felt such a sense of invasion," Rowling told Judge Brian Leveson. "It's very difficult to say how angry I felt that my 5-year-old daughter's school was no longer a place of complete security from journalists."

The author mentioned the "cavalier" attitude of reporters around celebrities, noting the assumption that since they're famous, they "asked for it".

Ironically, news of Rowling's testimony has become one of today's top stories around the globe - although journalists may now be more wary about calling her for an interview.

Rowling’s testimony came as part of the ongoing inquiry – initiated by British Prime Minister David Cameron – into scandals over illegal eavesdropping by Rupert Murdoch’s News of the World tabloid. The newspaper was closed in July after it came out that reporters had hacked into mobile phone accounts of celebrities, politicians and even victims of crime.

Now, more than a dozen News of the World employees have been arrested, and several senior executives have lost their jobs along with two London police officers and Cameron’s media advisor. Others testifying against the publication include actor Hugh Grant, a former soccer player and parents of murdered children.

"For a number of years I was relentlessly pursued by 10 to 15 men, almost daily," she said.

"I would often find myself, at the age of 21, at midnight, running down a dark street on my own with 10 men chasing me. And the fact they had cameras in their hands made that legal."

Months ago, after Miller attempted to take News of the World to court over illegal eavesdropping and cell phone violations, Murdoch’s company agreed to pay her $160,000 to settle the claims. News of the World's parent company is now dealing with a number of other lawsuits alleging similar phone hacking.

The Leveson inquiry continues to raise concerns over media ethics in the UK and worldwide, with hopes that a report issued next year could bring important changes to the country’s media regulation system.