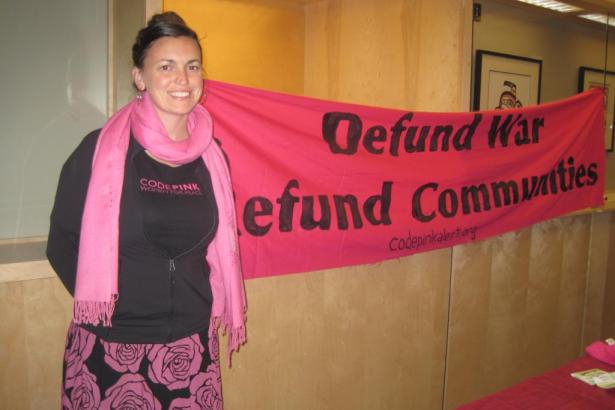 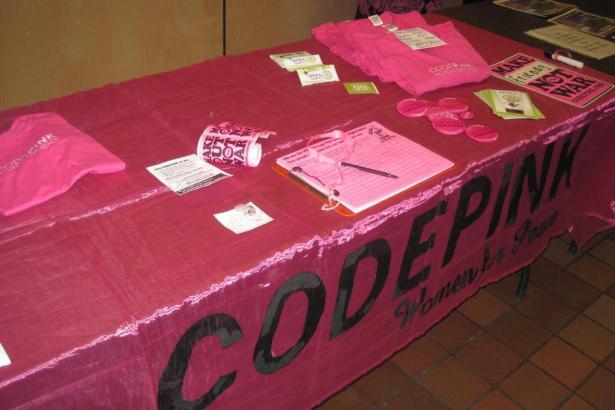 When Rae Abileah was asked to speak at this weekend’s World Peace Forum in Vancouver, she was thrilled. But she wasn’t sure if she’d even make it into the country.

The 28-year-old Jewish-American activist – a leader with the women-led social justice movement, CODEPINK – still has an open arrest on her record after a disturbing incident in Congress last spring, when she was assaulted by AIPAC members and taken to jail for interrupting a speech by Israeli Prime Minister Benjamin Netanyahu.

“I have an arrest record, and there’s an agreement between Canada and the US that they share the data for people with simple misdemeanor arrests, not just felonies. So, as of a few years ago, activists who have really simple, non-violent, direct action misdemeanors haven’t been allowed into Canada,” Abileah explained.

Luckily, this time she had no problems at the border.  Instead, she’s been able to spend the last couple days meeting like-minded activists and speakers during the peace-themed teach-in at Langara College.

“There have been a lot of really great discussions, and an amazing lineup of speakers,” she said.

“It’s getting into some of the theory behind social change, which is exciting. It’s also a cool sort of hybrid conference. It says it’s a peace forum, but there’s actually a lot of conversation here about green jobs, environmental justice and climate change and the Keystone Pipeline, and it’s neat how they’ve brought it all together.”

The origins of CODEPINK

Clad in pink patterns and sitting near a table of hot pink swag, it’s clear which group Abileah is here to represent. CODEPINK’s courageous work in the current US anti-war movement has been recognized internationally, and the group has now expanded to include a vast network of outspoken women in countries all over the world.

The grass-roots initiative – named “CODEPINK” as a play on the American government’s colour-coded terror alerts – started up in 2002 as a “preemptive strike” to protest the war in Iraq.

“Basically it was this group of women camping out outside the White House that wore pink and said ‘Don’t invade Iraq!’, and it just started catching on like wildfire around the country,” said Abileah, who joined the movement after graduating college in 2004.

Over the years, CODEPINK has taken delegations overseas to Iraq to deliver humanitarian aid, as well as bringing Iraqi speakers to North America to help educate people about the issues.

“A lot of our work has centred around changing public opinion around the wars, and doing that with really creative, visible tactics,” said Abileah, whose job now focuses mostly on the Israel-Palestine conflict and issues in the Middle East.

“It’s been an evolution, from looking at this single issue to looking at the bigger picture of US Foreign Policy,” she said.

CODEPINK’s work in the Middle East currently involves a lot of education and awareness, as well as boycott campaigns against products like Ahava Cosmetics, which are manufactured in an illegal settlement on the West Bank. The group has also arranged speaking tours featuring Israeli war resistors, to educate Americans about some of the other views that exist within the country.