U.S. to TransCanada: Find a new route for Keystone XL 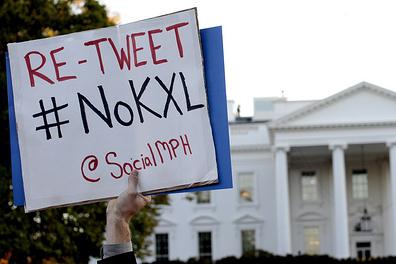 The $7-billion Keystone XL project experienced another setback today after the U.S. State Department ordered TransCanada to draw up another route to divert the proposed pipeline away from the Ogallala aquifer in Nebraska.

Uproar against the project has been strong in both Canada and the U.S.

Environmentalists, scholars and protesters have publicly challenged pro-pipeline politicians to take the initiative to end sociocultural dependency on oil.

A final decision is now not expected to come until after the 2012 U.S. presidential election.

WASHINGTON - The U.S. State Department is ordering the rerouting of TransCanada's proposed Keystone XL pipeline, a decision that could delay the $7-billion project for months if not kill it outright, sources have told The Associated Press.

Two senior State Department sources told the AP on Thursday that State has ordered the Calgary-based TransCanada to reroute the project away from the Ogallala aquifer in Nebraska, a major source of drinking water for millions on the Great Plains.

Such a directive will require another environmental review of Keystone XL, meaning a final decision on the project will come after the 2012 presidential election. The pipeline would carry millions of barrels of Alberta oilsands crude a week through six U.S. states to Gulf Coast refineries.

A State Department spokesman refused to confirm several news reports Thursday that suggested an official announcement was coming later in the day.

For months, Keystone XL has been the target of angry protests on both sides of the Canada-U.S. border and a major source of consternation for U.S. President Barack Obama.

Of particular concern to environmentalists is the current proposed route over the Ogallala aquifer in Nebraska, a key source of drinking water for millions on the Great Plains.

The pipeline has become a flashpoint of fierce debate about renewable sources of energy versus fossil fuels and America's ongoing dependency on foreign oil, sparking ever-larger and louder protests in the United States.

The State Department decision effectively means Obama can dodge a political bullet since he won't have to decide whether to approve the project until after next November's presidential election.

The White House was reportedly becoming increasingly concerned that the Canadian pipeline would cost Obama much-needed votes in the election. Environmentalists within his liberal base had vowed to stay home if he gave Keystone XL the green light.

TransCanada, however, has long been opposed to changing the route. In an interview this week with The Canadian Press, a senior company executive said Keystone XL could be delayed for years if the route has to be changed.

Such a route change would force Keystone XL to go through environmental and wildlife studies all over again, said Alex Pourbaix, president of energy and oil pipelines for TransCanada Corp. (TSX:TRP).

So far, the environmental review process has taken more than three years.

"There's no doubt that if we were asked to do that, I think it would a minimum of a one- to two-year delay,'' he said.

Most studies can only take place during the summer, further prolonging the process.

Sen. Bernie Sanders, an independent from Vermont who has spearheaded Democratic opposition to the pipeline in Congress, issued a statement that appeared to treat a formal announcement from the State Department as a foregone conclusion.

"I welcome today's announcement that the State Department has decided to delay a decision on this project in order to further review its potential impacts,'' he said.

With files from The Associated Press