How city governments are dealing with Occupy 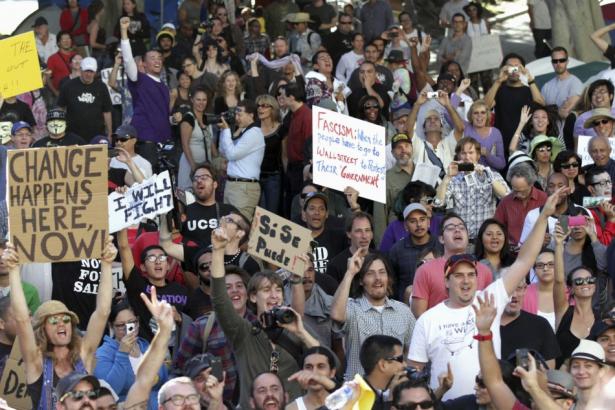 As Vancouver continues in its attempts to enforce city bylaws and deal with protesters, cities across Canada and the U.S. face similar battles. Here’s a look at how it’s going down in other places, with expert insights on how Vancouver’s response stacks up.

In Tennessee…Officials have halted arrests and allowed demonstrations to continue. At the end of October, state courts granted protesters a temporary restraining order against Governor Bill Haslam, after the government had implemented a curfew on demonstrations at the state Capitol’s Legislative Plaza. Reports say Haslam initiated the curfew after complaints of multiple “misdemeanor violations”, including public urination, an assault, and a “tryst” under a tree at the site.

The Occupy Nashville supporters there said the curfew (and resulting arrests) violated their rights to free speech and freedom of assembly. Judge Aleta Trauger agreed, saying that the city’s Legislative Plaza was a “quintessential public forum”. Before the curfew was scrapped, over 50 protesters had been arrested. But the Nashville magistrate refused to jail the protesters and released them with citations, saying there were no adequate grounds for arrest.

In Oakland…Repeated clashes between protesters and police have earned the city a reputation for the most violent response to an Occupy demonstration in North America. The intensified conflict began on October 25, when officials first moved in to enforce a written notice demanding an eviction. The eviction notice came after reports of sexual assault, riot threats, public intoxication and a number of health and safety concerns at the camp.

During that day’s attempted eviction at Frank Ogawa Plaza and Snow Park, police in riot gear cleared tents, employing tear gas and batons to control protesters who tried to cross the line. An Iraq veteran participating in the demonstration, Scott Olsen, was one of several protesters severely injured and sent to hospital. Marches and rallies continued throughout the day, with allegations of protesters throwing rocks and other objects at police.

On November 2, Occupy Oakland protesters shut down a major city port as part of a general strike, drawing over 20,000 people who came to join in support. Just hours later, there was yet another clash with police when demonstrators lit a massive fire in the middle of the street. The confrontation resulted in over 100 arrests, and yet another war veteran made headlines when he was injured and placed in intensive care.

By initiating such an aggressive campaign to end the protests, the city of Oakland risked alienating a greater proportion of the working public, as became evident in the stunning numbers who turned up to support the General Strike. And the cost to City Hall is not just ideological – reports say expenses related to the Occupy efforts could reach over $3 million.

This week, business owners and city officials faced angry confrontations from protesters at a press conference, as council members called for an immediate end to the encampment. Oakland Mayor Jean Quan issued a statement asking Occupiers to leave the grounds, but emphasizing her hopes that any plan to remove protesters should not result in violence.

“I call on elected leaders who are clamoring for an immediate raid to put forward a plan that does not cause additional injury to people, property and our reputation, or result in another reoccupation,” Quan said in the statement. According to other city officials, as of now there is no real plan in sight.

In New York City…The originators of the Occupy Wall Street movement have remained strong, resisting eviction and continuing with the encampment at Zuccotti Park. Now in their seventh week of protesting, members of the demonstration have started a two-week journey to march to Washington D.C.

New York Mayor Michael Bloomberg has so far avoided taking direct action against the protest, although there was one attempt at eviction in October, on the grounds of “cleaning” the park. As the park is privately owned, the owners could technically opt to remove the camp on trespassing charges, risking potentially violent clashes with police.

Violence has erupted – and many arrests have been made – on multiple occasions since the protests began in September. The most widely publicized incident occurred during a march in Manhattan on September 24, when confrontations resulted in police brutality (including the use of pepper spray) and up to 80 arrests.

Like other mayors in Occupied cities, Bloomberg has been put in a difficult position. In many places public support for the movement appears to be waning, and with increasing calls for city officials to end encampments, politicians risk losing voters if they keep delaying action.

In London, Ontario…Mayor Joe Fontana announced Wednesday that protesters would now be prohibited from setting up tents in Victoria Park, where the Occupy London demonstration had been going on for weeks. Officials removed over 50 tents beginning at 1 a.m. Wednesday, after the city authorized police to move in and enforce municipal bylaws.