Occupy Vancouver will remain despite police crackdown in U.S. 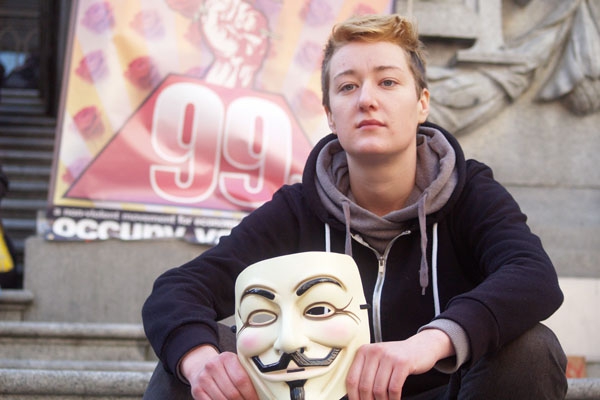 Lauren Gill, with Occupy Vancouver, has stayed at the camp since its formation on Oct 15, and says demonstrators have no intention of leaving. Photo by David P. Ball

It was an unusual juxtaposition: Occupy Vancouver campers – now firmly entrenched in their ever-growing tent village – versus a condominium-dwelling corporate lawyer who lives a block away from their art gallery encampment.

This lawyer, however, had walked a block from his expensive residence to tell demonstrators he supports their protest against the economic system, in the midst of a crackdown on similar occupations across the U.S. this week, in which hundreds were arrested and an Iraq veteran remains hospitalized with brain damage after being knocked into a coma by a tear gas canister in Oakland, California on Wednesday.

“He said we've been better neighbours than anyone he knows who lives in a condo downtown,” said Lauren Gill, who has slept at the tent village since it began October 15. “The fact this movement has taken time to talk to people like this gives me a lot of hope.”

“It means something different for everyone, but it's not just reform we're talking about. It's not just an economic issue either. We're talking about systemic change -- it means the eradication of racism and poverty, of changing the way we think and feel about the world.”

What began as a scattering of tents – after thousands gathered to show support the past two weekends, and visits from David Suzuki and other activist luminaries – has burgeoned into a makeshift village of more than 100 tents, a geodesic dome 'healing arts' space, a live music jam stage, permanent food-serving kitchen, daily mass discussions and meetings, a cinema, lending library, and nearly constant political conversation.

However, the week was overshadowed by violence in the U.S., where similar encampments were broken up by police in cities from Atlanta, Georgia to Oakland, California. The Occupy movement has spread to nearly 2,000 cities worldwide after it began in New York City last month, including every urban centre in Canada.

In Oakland, the encampment was broken up by hundreds of police, who used tear gas, batons and percussion grenades to tear down a tent city outside Oakland, California city hall. In a later demonstration against the police raid, Iraq veteran Scott Olsen was hit in the head with a high-speed tear gas canister on Wednesday, an incident which caused police to back down on their push to end Oakland's Occupy camp. Olsen was critically injured hours after police used a pre-dawn raid to destroy a tent village comparable in size to Vancouver's.

“The reactions of people around me were frustration and sadness to see their city destroyed. There was a whole village there. They sieged the occupation and then occupied the square themselves – it was like they were engaged in a territorial war.”

Although journalists were barred from entering the area, Wolf and others were able to get close enough to witness – and in some cases videotape – the police raid, which he estimated involved up to 500 officers from numerous law enforcement agencies in the surrounding region.

“Occupy Oakland protesters were peaceful, they weren’t terribly noisy, they were friendly,” said Mike Godwin, an Oakland lawyer who has represented Wikimedia. “I walked past them every day or every other day, there was no sense that there was anything particularly troubling to me as a member of the neighbourhood.

“To be quite frank, the more social activity happening in downtown Oakland, probably the safer it is.”

Godwin was awakened in his home a few blocks from the encampment at 4:30 a.m. by the thundering of police helicopters announcing the raid, and arrived in time to witness the tents being hauled away by police.