The fourth in a five-part series: "Why I love my neighbourhood," presented by Evo Car Share. 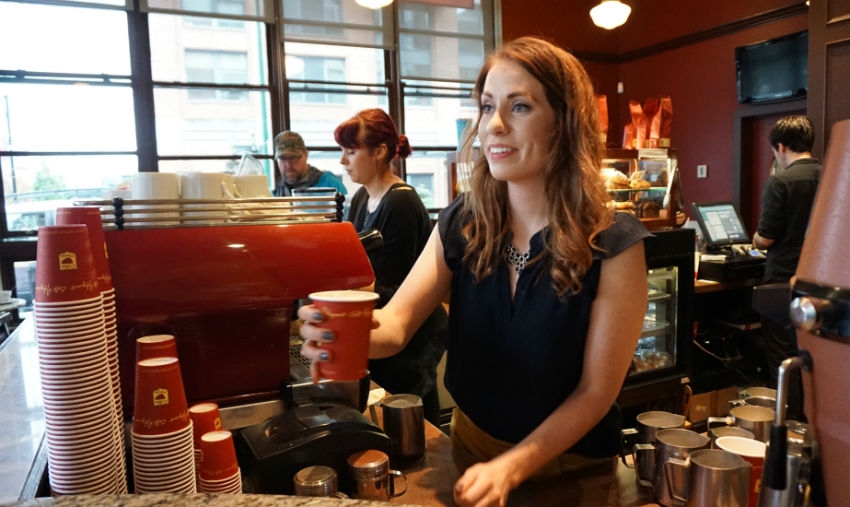 Laura Miller loves the hustle and bustle of Yaletown, which keeps things interesting at Caffè Artigiano on Davie Street. Photo by Elizabeth McSheffrey.

By 11 a.m. on a weekday morning, it's standing room only at the Caffè Artigiano in Yaletown. The Italian coffee shop is a local favourite, and customers spill into the ‘overflow room’ in the hotel lobby next door.

At the tables around me, students discuss the sky-high costs of Vancouver rent, girlfriends search for ketchup to go with their ham and cheese croissants, and a trio of briefcase-toting professionals compares caterers for an office party.

Breathe it in, Laura Miller tells me: this is Yaletown.

“It’s a cool mix,” says Miller, manager of the trendy coffee shop and firsthand witness to the morning chaos of the lively downtown neighbourhood. “I love how busy it gets in the morning, I love the rush, the hustle and bustle.”

Despite its modern vibe however, upon opening my laptop I learn that Caffè Artigiano doesn’t offer wireless Internet to clients. This is intentional, Miller explains, and part of the company’s business ethos.

“It’s very much that when people come, they are talking to each other,” she says, putting the finishing touches on a foamy latte. “It’s a really great place to get a cup of coffee with your friends and actually chat rather than be plugged into your electronics.”

True enough, I think, taking another quick glance around the room where patrons chat animatedly with one another or dive into one of the bistro’s newspapers on stock.

This dynamic pace of life is what lured Kristy Lagourgue to Yaletown four and a half years ago. After spending time in Calgary, Winnipeg, Surrey and White Rock, she decided there’s no other place she would rather be.

“I have to say that Vancouver, especially this little corner of Yaletown, is probably the best place to live in the world,” she tells me from the Roundhouse Turntable Plaza, where she’s out for a walk with a friend and her daughter. “It’s a very active lifestyle, everything is close and everyone here is really nice. It’s a great neighbourhood feel in a big city.”

Despite running her own business from home, Lagourgue says living next to the seawall — perpetually crowded with walkers, runners, cyclists and strollers —  means she gets out of the house every day. It was a convenience she particularly appreciated when her daughter was born, and made it easier to connect with other young moms.

“Seeing everyone running and jogging and having the parks and stuff so close — that’s the huge advantage of it,” she explains. “You’re never really isolated and I think for me having a small child, if I had been in the suburbs, I would have felt a lot more alone and isolated than having everything accessible and at my fingertips here.”

Gina Maria, who is walking her dog a block away by David Lam Park, couldn’t agree more. She recently moved to Yaletown from Shaughnessy and says it’s one of the best decisions she’s ever made. 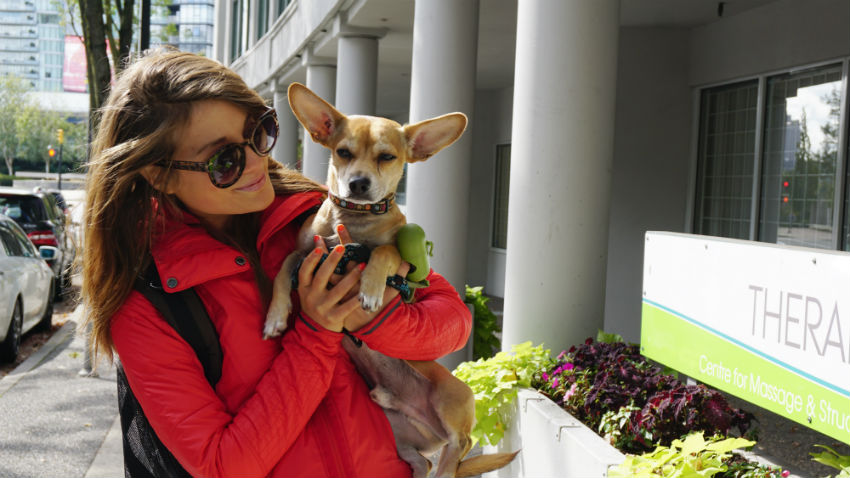 Gina Maria and her little dog think Yaletown is "the best of both worlds." Photo by Elizabeth McSheffrey.

“I love the area,” she tells me as we walk under the pink Yaletown flags on Pacific Boulevard. “I just love how close it is to everything, I love the shops — it’s kind of the best place in Vancouver I think.”

She lauds Yaletown as the “best of both worlds” in terms of its demographic, which includes young people, families, and professionals who work in the downtown core.

“You get a mix of everything,” Maria says happily. “It’s not just young people doing yoga and going for food.”

The area has blossomed into one of the most sought-after neighbourhoods in Vancouver and boasts generous green space, a waterfront view, trendy restaurants, high-rises and office spaces.

But Yaletown wasn’t always a hip and happening place: before Expo ’86 it was primarily an industrial district of train yards and warehouses.

Musician Shaun Verreault moved from Saskatchewan to the corner of Richards and Nelson Street in 2002, and says Yaletown has come a long way in the last 10 years alone.

‘It felt like it was still kind of transitioning from being a manufacturing warehouse place when we first moved into it,” he explains from the Roundhouse Community Arts and Recreation Centre, where his three-year-old daughter Layla is about to start her first soccer lesson.

“So many things have moved in around us that are kid and family-friendly, we haven’t even considered moving anywhere else. We like being centrally located.”

According to Layla, the best places in Yaletown are the community centre, the public parks, and the nearby Vancouver Aquatic Centre where she is currently learning how to swim. Her father loves these facilities too, and says their proximity to one another has an added bonus.

“We go on a sort of ‘park crawl’ where we go to four or five parks that are close by,” he explains. “What I like about living on the peninsula is unless it’s to see family or something, we never drive — it’s always walking, so you take road rage out of your day and it makes your life a lot nicer.” 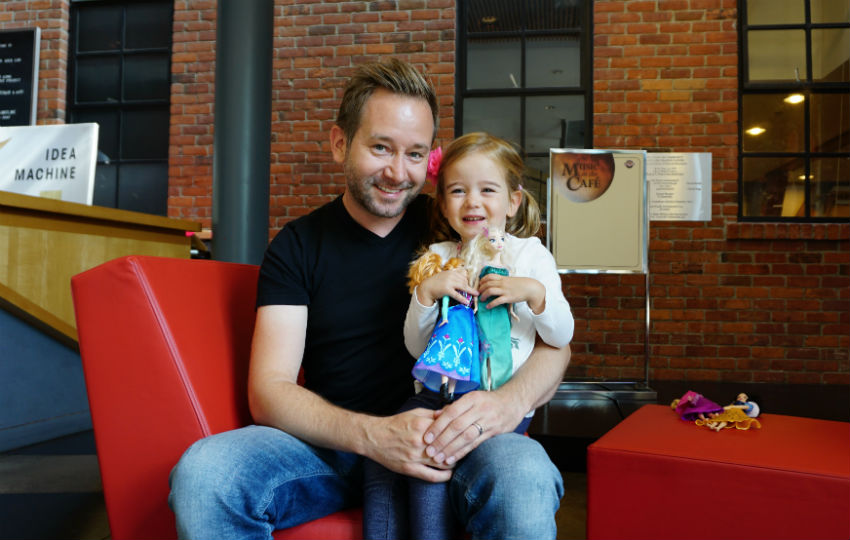