The first of a five-part series: "Why I love my neighbourhood," presented by Evo Car Share. 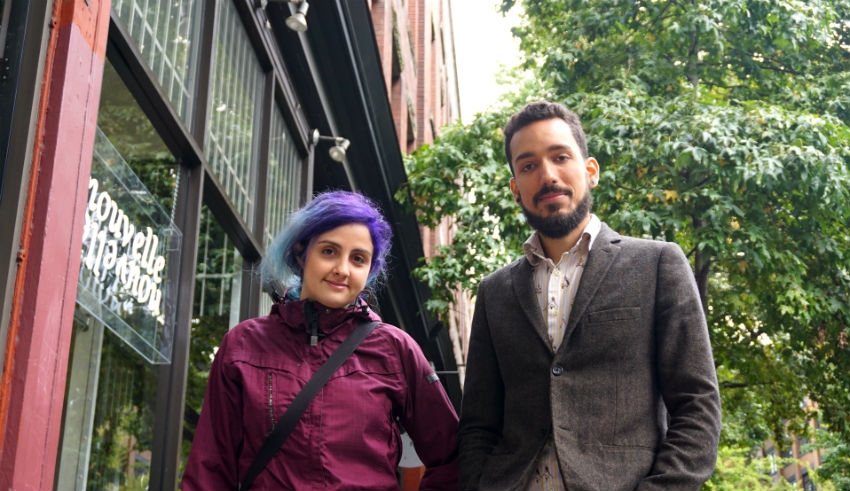 The lights are the very best part, according to Abel Vargas pictured here with Taisa Monterio. Photo by Elizabeth McSheffrey.

The lights never go out in Gastown.

"That’s the first thing I want to show people,” says visual effects artist Abel Vargas, along with his co-worker Taisa Monteiro. “I think what I like the most is the lights on the trees at night; it always reminds me of Christmas."

Vargas and Monteiro have been working in and out of Gastown for years, and like the residents who live there, agree that the lights make for a "great environment" to live and work in.

“It’s sort of like Montmartre meets Brooklyn,” agrees Denise Clark, who has lived in Gastown since 2010. “It’s a little bit of Paris, a little bit of New York, and definitely West Coast because of the hospitality and openness people have.”

I say goodbye to Vargas and Monteiro, who rush off to enjoy their lunch break, and catch up with Clark in her new apartment on West Cordova. Her eyes light up as she tells me all about Vancouver’s oldest neighbourhood.

Her favourite cookware store, Ming Wo, is a block away in Chinatown and has been there since 1917. Her favourite gourmet ice cream shop, Soft Peaks, is just around the corner on Alexander Street, and opened in January this year.

It’s the perfect mix of old and new, she says, and the combination is addictive to residents and visitors alike.

“It draws people who are quite open-minded, willing, accepting and creative, and that crosses all stratospheres, whatever your demographic or economic situation,” she explains. “I love coming home to Gastown because it’s always awake.”

A newcomer to Vancouver and captured by her description, I decide to experience this for myself and hit up the town on a Saturday night.

“I don’t know how I feel about octopus tostada,” says a gentleman to his date at Tacofino on West Cordova, which is bursting at the seams with patrons by 7 p.m.

“Try my mojito,” says a woman as her group of girlfriends swap their drinks. I’m sitting at the table next to them, staring blankly at the menu wondering what chayote, cotija, and chorizo are.

Gastown is a paradise for foodies, drinkers, dancers — anyone who wants to be at the heart of the action on a weekend evening in Vancouver. Playing it safe, I chow down on a fish taco with cabbage and salsa, and contemplate where to go next for the evening. 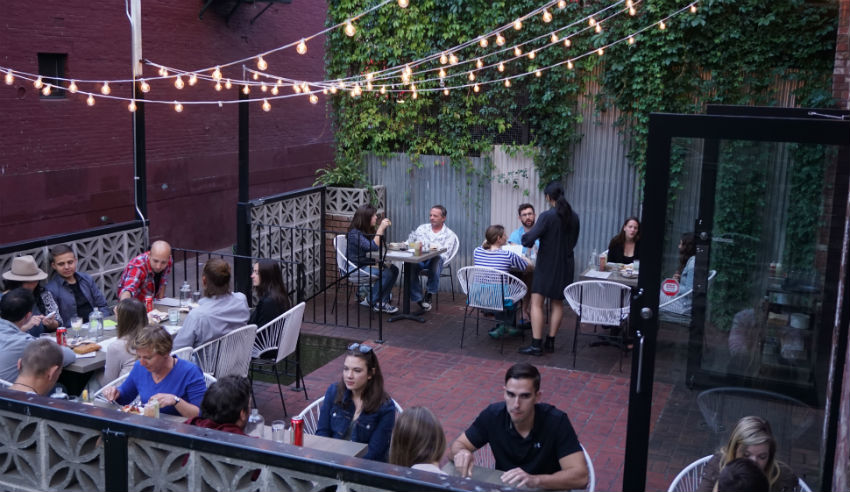 The patio of Tacofino on West Cordova opens into Blood Alley in Gastown. Photo by Elizabeth McSheffrey.

With some input from friends, I settle on The Diamond on Powell Street, a bar known for its exotic cocktail menu. Sipping on a zingy Submarino under the glow of a vintage crystal chandelier, I watch the crowd compare tastes in music and quiz frazzled servers on the bourbon menu.

One server, Roksan Yazman, has just delivered an extremely impressive speech about whiskey and tells me why she loves her job so much:

“I love the variety of people Gastown draws in,” she explains, clutching an empty drink tray. “You get university students, couples on their 50th anniversary… It’s a nice way to get to know people.”

I thank her, and decide to hop over to Revel Room on Abbott Street to have one last drink before the bars close up. To my surprise, when the server brings my Cucumber Swizzle, she also brings a plate full of freshly-baked chocolate chip cookies.

The Revel Room serves cookies to its customers every night before last call, using the original recipe of the owner’s grandmother. It’s just their tradition, I learn, simultaneously deciding I'll have to come back here.

“I come here at least once a week for the cookies,” says David Paterson, a Revel Room regular. “I like the live music and the staff are fantastic." Of Gastown, he simply says, "it’s so vibrant and full of life."

Clark was right. The lights never go out in Gastown.

In her apartment on West Cordova however, she reminds me that Gastown is much more than a place to eat, drink, dance, and shop. The neighbourhood is a hot spot for business owners and entrepreneurs who want to live where they work and love where they live.

“As we speak, there’s construction in buildings and renovations going on all around us," she says eagerly. "There are new businesses opening all the time and it’s an incredible place for artist folks." Only five years ago, she points out, the very building we're standing in was a parking lot, and the SFU campus across the street, now brimming with art students, hadn't yet been opened. 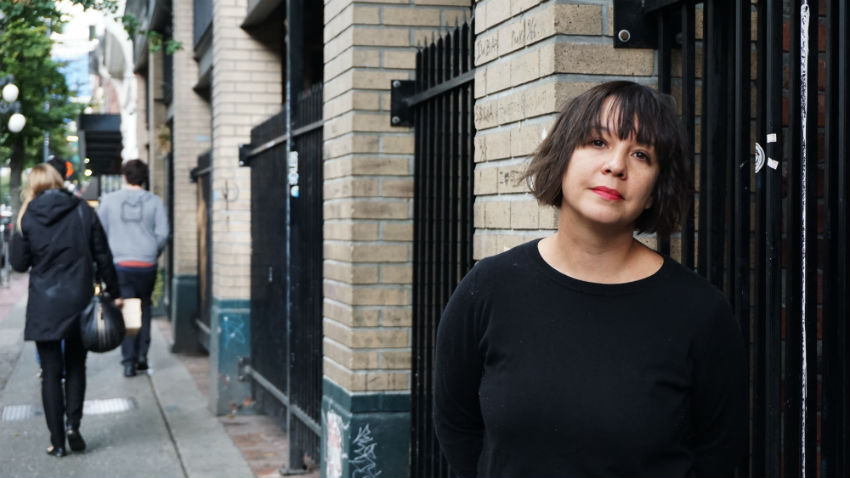 “People are basing their grassroots enterprises here as the new trendy way to build businesses because you get to give back in a way,” she says between racks of clothing at the Community Thrift and Vintage on West Cordova, which donates its profit charity.

“In Gastown I like the fact that… we have direct access to the people who benefit from the money we raise,” she explains. “Having a lifeline to the community you’re affecting is integral to making a social enterprise work.”

Clark, a nurse educator, moved to Gastown in 2010. Friends and family called it a "bold" move at the time, she says, but the rapid expansion of Gastown was just too exciting to be left out of.

"It seemed like Gastown was on the cusp of developing, with Nester’s Market and actually the Woodwards Building itself I think was kind of pivotal in changing the neighbourhood,” she explains. "I would be right in the heart of it and I thought I'd give it a try.”

It took her a while to adjust to the pace of life in Gastown, but as soon as she settled in, Clark knew that she would never leave.

"I think it was the same thing that drew us — this passion and excitement,” she says. "This is a unique place, there really isn’t anything like it anywhere else."

"That's probably why there are so many tourists," she says smiling.

Clark travels a lot for work — Calgary, Edmonton, Montreal — but says there's nothing quite like taking the SkyTrain from the airport, getting off at Waterfront Station and rolling her suitcases back into Gastown.

"I realize I’m home where people have the same values," she says. “Gastown to me is very open-minded and I love that."

“I  love my neighbours,” she says, smiling. “I’ve had just the most amazing conversations with people here… I love that aspect. I wouldn’t trade that for anything.”