Why I love Strathcona

The fifth in a five-part series: "Why I love my neighbourhood," presented by Evo Car Share. 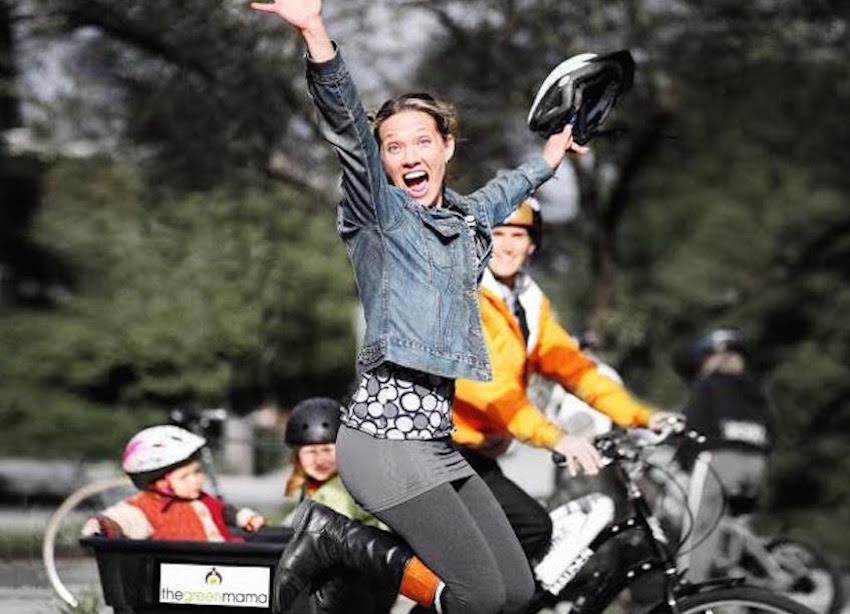 Manda Aufochs Gillespie loves her neighbourhood, Strathcona. Photo by Jonathan Cruz.
“Every time I come to visit you, I feel like I am going on vacation,” says my friend Susanne.
This is odd because I live in a small townhouse in Strathcona and she lives in a very big house at the foot of Grouse Mountain.
Yet, every time she, or anyone, comes to visit this neighbourhood, magic seems to happen: the sun comes out over MacLean park where children are always laughing and it mixes with the sound of hipsters hanging, parents drinking a glass of wine, and a very wise group of First Nations elders drumming.
It is a magical neighbourhood. Sometimes there are rainbows.
I chose to live in Strathcona, rather than any other Vancouver neighbourhood, because it represents a kind of ideal: the kind of neighbourhoods many of us grew up with or have just come to idolize on TV.
Indeed, there is something truly unique in the way a diversity of people—different ages, incomes, cultures and backgrounds—live together, not just cross paths, but share lives in this community.
“Why do you live here?” I ask my next door neighbour.
“It’s the people. I love the people here,” she says and smiles. She really means it.
It’s the first thing they all say in my not-so-scientific poll that involved me asking everyone I encounter in a day this question. 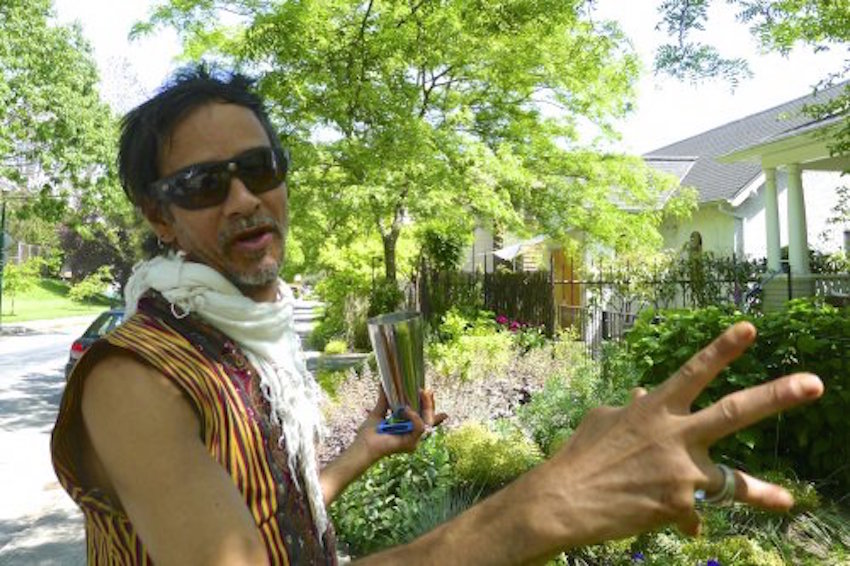 Gregory P. The unofficial Prince of Strathcona. Photo by Jordan Yerman.
When I ask others why they love their neighbourhood, the responses are all some variation of the following: Strathcona is filled with diversity, and what's more, people are open and accepting of others' differences.
Gregory, a former globe-trotting, high-end hair stylist chose Strathcona as the place to put down roots and open his Parlour G hair salon. Considered by many to be the unofficial Prince of Strathcona because he knows so many people in the neighbourhood, Gregory says,
“It’s a special place like no other in terms of community, We help people and we don’t judge them in this neighbourhood. There is a heartfelt acceptance of everyone that passes through.”
There are probably a lot of very good reasons that Stratchona is as rich in diversity as it is.
When I ask some of the neighbourhood old timers, they tell stories of how residents banded together to stop a freeway from tearing apart the city in the 1960s.
This was such a significant event that planners around the world still point to it as one of the most important elements in Vancouver’s success as a city.
At that time, Strathcona encompassed the now vanished Hogan’s Alley, historic home to many residents of African descent. Strathcona also includes Japantown, and Chinatown and welcomed many immigrants who built churches and centres bearing names of countries like the Ukraine, Russia, Korea, and beyond.
Although it's filled with young families today, Strathcona is Vancouver's oldest neighbourhood. It has history. A lot of it still stands, not just in plaques, but in the homes and minds and faces of the people.
There is something else that I believe makes this neighbourhood feel like an old-fashioned village with a modern, inner-city face.
We have a village green, otherwise known as MacLean Park, where children roam free, dogs chase frisbees, and people hold endless yard sales.

My 14-year-old neighbour, Nina, agrees with me.

“The park is great," she enthuses. "There are lots of other kids. And we are nearby to everything: bike paths, the buses on Prior and on Hastings.”

Strathcona is also home to every child’s fantasy—La Casa Gelato—a.k.a. The Pink Palace—where you can join dozens of other families and dates trying to pick from hundreds of flavours (wasabi gelato anyone?) until 11 p.m., seven nights a week.

Nina is also a star in one of Strathcona’s amazing free-things-to-do-that-only-exist-here institutions. The Limelight Project provides professional level performance instruction to kids and then put on top-notch shows.

All those churches and community centres provide loads of other affordable activities for kids, and adults: whether your cup of tea is doing tai chi with the older Chinese ladies in the park or yoga with the neighbourhood moms or learning to carve wood; it’s all here.

There is something that feels safer about having my kids in this neighbourhood than the quieter neighbourhood where I lived before. Here, I feel that my children and I are seen; that my neighbours know us and would jump in and help us if anything happened. 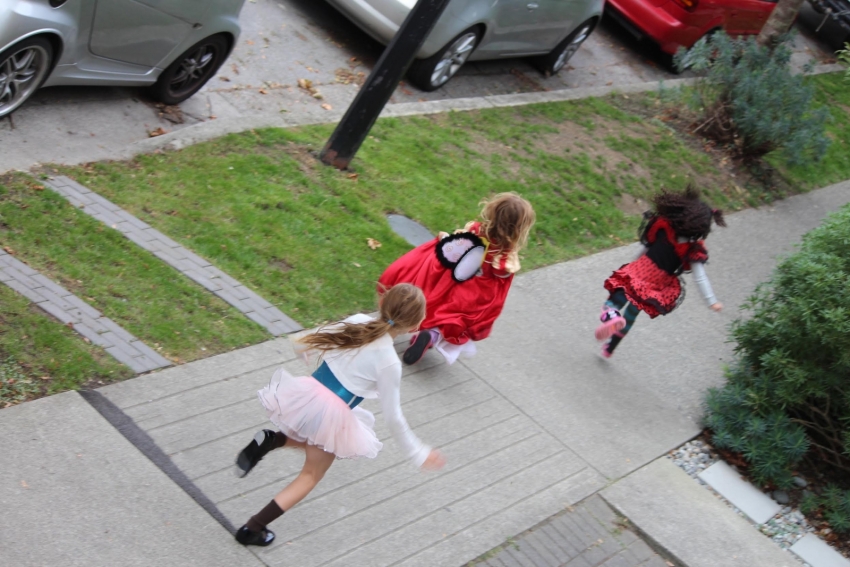 Magical Strathcona. Photo by Keith Jardine.
There is also another element of the village green and that is that while it is surrounded by houses—ranging from people living in camper vans to 1.5 million dollar renovations—there are also four little corner store/cafes within two blocks of the park.
At these places you can literally get everything from fresh flowers, true Italian olives, and organic coffee and books written by one of the many authors who live in the surrounding streets.
Or, a person can raise their their own food at one of Vancouver’s largest community gardens in Strathcona park, visit the charitable Sole Food Farms, or visit the summer farmer's market at the nearby train station.
If feeling adventurous, I walk the two blocks to Homesteader’s Emporium, where I can get what I need to plant my own garden, raise chickens, or create a beehive. Truly, you can get anything in this place.
But what brings most outsiders into this neighbourhood is the art. Strathcona with its mural-every-block is also home to the Eastisde Cultural Crawl where, every fall, thousands of people pour into the neighbourhood for a four-day art walk that takes visitors inside the numerous art studios located here.
And if art isn’t your thing, that's okay, because we have parks, gardens, and the secret to surviving a Vancouver winter: the funky, affordable, and rather fabulous steam rooms at Hastings Steam and Sauna.
Perhaps, John, one of the most recent owners of the iconic Wilder Snail, puts it best: “So many people come into the cafe and love [this neighbourhood] because it represents things lost in this city or in life in general.” And that’s the thing: being in this neighbourhood feels as if something very important has been found.