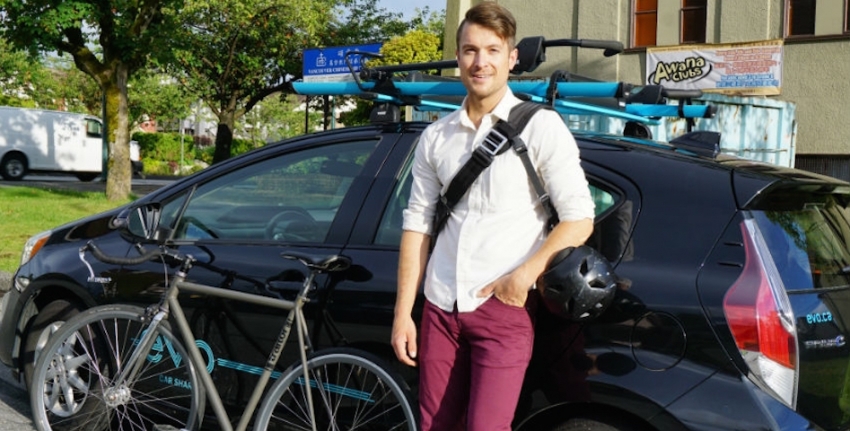 Avid cyclist and East Vancouver resident Ryan Whyte couldn't contain his excitement when he found out his favourite car sharing program had expanded its reach to his favourite hiking and biking trails. Photo by Elizabeth McSheffrey.

“It’s very exciting,” he says. “I immediately messaged my girlfriend to tell her…you can go hike or bike and have a car waiting for you when you get back.”

Whyte, who doesn’t own his own vehicle, has been an Evo Member since the car sharing company launched last year, and has previously used it for big grocery runs and moving trips.

But now, he's looking forward to using Evo to commute to work at BCIT on rainy days and for all kinds of outdoor adventures, no longer limited to central Vancouver.

“Definitely them having the bike racks is a selling feature for us,” he says, referencing Evo’s spacious, four-door cars.

The expansion means Ryan and his girlfriend can book a car in East Van using the Evo App on their smartphone which now includes a handy reservation countdown timer, directions to the nearest car or parking location, and the ability to check your minutes and billing right from the App.

They can then drive to an area within the new Home Zone, drop off the car and bike to great destinations in North Van, Burnaby and beyond.

The vehicles — instantly recognizable by their black and blue design — also include ski racks, plenty of trunk space, and what Whyte describes as a “great sound system.”

“We’ll put our bikes on the roof to get to wherever we’re going,” he explains, “then maybe go for a bike ride and put them back on the roof on the way back. Being able to get closer to nature is great.” 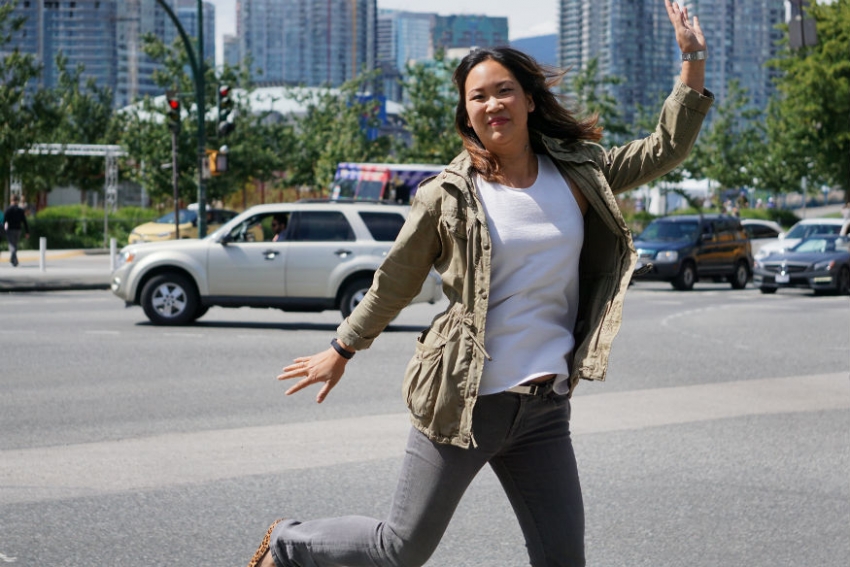 North Vancouver resident Tracey O'Haggarty is a new Evo Member and can't wait to take her family on a lengthy bike trip in North Vancouver. Photo by Elizabeth McSheffrey.

An awesome addition to your transportation toolkit

Evo announced the expansion of its boundaries at the beginning of June, along with a large addition to its fleet of hybrids.

It was icing on the cake for North Vancouver resident Tracey O’Haggarty, who signed up as soon as she heard the good news.

Unlike Whyte, O’Haggarty is a vehicle owner, but like Whyte, she is an avid cyclist.

The car she shares with her partner doesn’t have a bike rack however, and with a young child at home, long bicycle trips haven’t really been an option for them. Now, she plans to throw their bikes on the rack and their little one in the back for rides around North Vancouver, Stanley Park and UBC.