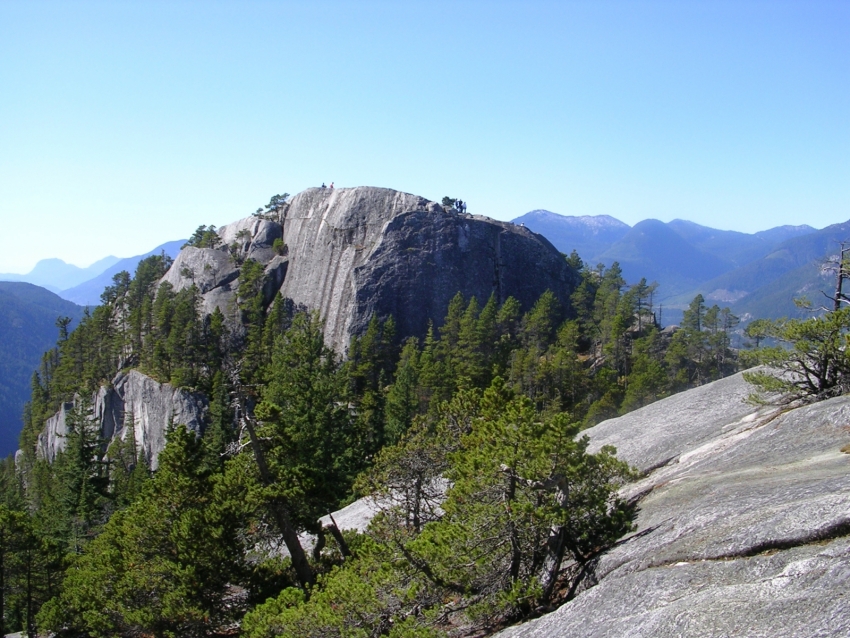 But many visiting outdoor enthusiasts are unaware that the iconic granite monolith also carries the scars of a legendary battle.

As Sinulhkay fled across the mountain, the creature seared a trail of defeat into the stone, which today is visible as a deep blackened cleft that runs like a scar up and over the mountain's face.

"It's a very powerful, sacred mountain that my people have admired for many years," says Ian Campbell, hereditary chief and elected councillor of the Squamish First Nation.

Campbell talks of the legendary transformer brothers creating the Chief out of an enormous First Nations home in which all the spirit animals had gathered for a feast.

"We see it in the physical realm as a mountain, but in the spirit realm it's a longhouse," he said, describing it as a symbol of togetherness.

Today, the Stawamus Chief — pronounced stah-WAH'-muss, but known colloquially simply as the Chief — attracts thousands of visitors every year, both for its premiere rock-climbing offerings but also thanks to its readily accessible hiking trails that climax in rewarding ridge-top vistas.

The mountain towers 700 metres over the head of a picturesque, inundated fjord, about 50 kilometres northwest of Vancouver.

Looking down from the first of its three rounded granite summits, the slithering Squamish River can be seen reaching the salty waters of Howe Sound, which ripple between shades of teal and aquamarine under a shifting, cloud-covered sky.

The initial peak is accessible about 1.5 kilometres from and 540 metres above the trail's starting point, while the two remaining summits are located slightly higher and farther along.

The panorama offers a view across the core of the Squamish Nation's territory.

To the north, the snow-streaked slopes of Nch'kay — also known as Mount Garibaldi — angle into the high-ceilinged clouds. Nch'kay played a prominent role in the Squamish Nation's creation story, offering sanctuary to the region's people during the great flood, explains Campbell.

On any given summer day, small coloured specks can be made out dotting the mountain's face, indicating yet another band of climbers who have opted for the more direct, albeit somewhat more challenging, path to the peak.

The mountain itself cuts a striking image from afar, visible at the base of the scenic Sea-to-Sky Highway as a radiant granite sentinel, standing watch over the sleepy community of Squamish. The monolith is the namesake of the First Nation settlement of Stawamus, located immediately at its foot.

Smooth, glacier-polished stone hints at the Chief's formative glacial past, while Smartwool- and Gore-Tex-clad hikers belong to its present.

A middle-aged couple from Michigan braved the moss-covered crag and scrambled up the occasional metal ladder and chain to reach the first peak.

"You just can't do justice to this place," says David McGreaham, marvelling at the view with his wife Kathy. "This is something I'll remember."

Other visitors come from farther afield. Ludovic Minne of France was about to wrap up two weeks of climbing and hiking in the Pacific Northwest.

"Some people told me if you go to B.C. you have to go to Squamish," says the 25-year-old Frenchman, sitting in the parking lot at the mountain's base, camping stove and breakfast supplies spread out before him — a regular occurrence.

"The view is just amazing — really, really beautiful," he adds in a thick accent, smiling broadly as he describes watching the sunset from the summit the night before.

Consult the B.C. Parks website for information on the Stawamus Chief: http://www.env.gov.bc.ca/bcparks/explore/parkpgs/stawamus/