Others attend the movies as much for sentiment as for the offerings onscreen. “I have one couple, now well in their 60s, who always come to sit in the same pair of seats where they used to smooch as high school kids,” reports theatre-owner Ann Nelson.

Of course, she adds, by now “everyone’s derrière has gotten a little wider.” So the Patricia has installed new seats (still in red plush), acquired second-hand for cheap from a remodelling of Vancouver’s Orpheum Theatre.

Not much else has changed, though, inside the little jewel box of The Pat (as it’s locally nicknamed). Ceiling fans still chop the air. The proscenium is still framed in the original French silk curtains. The walls are still blazoned with hand-painted beachscapes, plausibly of Sunshine Coast vistas except for the pair of peacocks strutting incongruously in the frontmost panels. 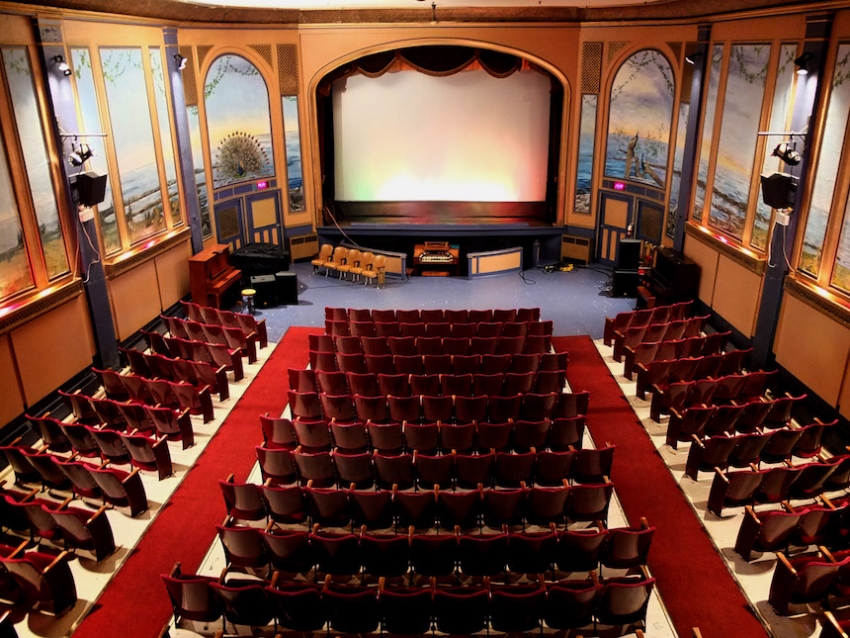 On the stairway up to the loge, a dewy young Queen Elizabeth in her coronation finery still beams from a 1950’s rotogravure. Her Most Serene Majesty would no doubt blush to hear the stream of Queen's English emitting from the balcony above, which now serves as a dressing room for the Festival's pre-show.

"Sheesh! Anyone have a decent safety pin? I've got nothing here but these shitty Chinese ones from the Dollar Store!"

A pouty vedette in black lace bodice and fishnet stockings bustles halfway down the stairs, only to be met with a helpless shrug from Nina Mussellam, the dressing room door-keeper and doyenne of the Friends of the Historic Patricia Theatre Society. With a toss of her blonde mane, the buxom showgirl flounces back up to the balcony.

That'd be Carol Ann Leishman, Mussellam confides. She's leader of the burlesque kickline that the Film Fest has recruited to introduce its opening selection, The League of Exotique Dancers. Both the kickline and the risqué film have been laid on in recognition of The Pat's original incarnation as a burlesque venue before it was rebuilt, after a fire, as a cinema.

"It started out, in 1913, as little more than a tar paper shack," Mussellam explains, "down by the mill site and the old Union Steamship dock. The hoochie-koochie girls would come up every week on the ferry and play two shows, Thursday and Friday, along with vaudeville entertainers, at the theatre.

"Then they'd do a special Friday late night show at the pub for their most devoted fans." It's to celebrate these pioneer women that Leishman and her troupe have been brushing up on their bumps and grinds.

To cool down from the torrid mayoral can-can and the ensuing striptease footage, we adjourn to the cozy Latino-themed precincts of the Costa del Sol (tr. "Sunshine Coast") bistro for an after-theatre Jamaica Margarita. It's served under the ambiguous gaze -- benignant? bemused? censorious? -- of a full-wall mural portrait of Mexican revolutionary Emiliano Zapata, urging us on to "Libertad." 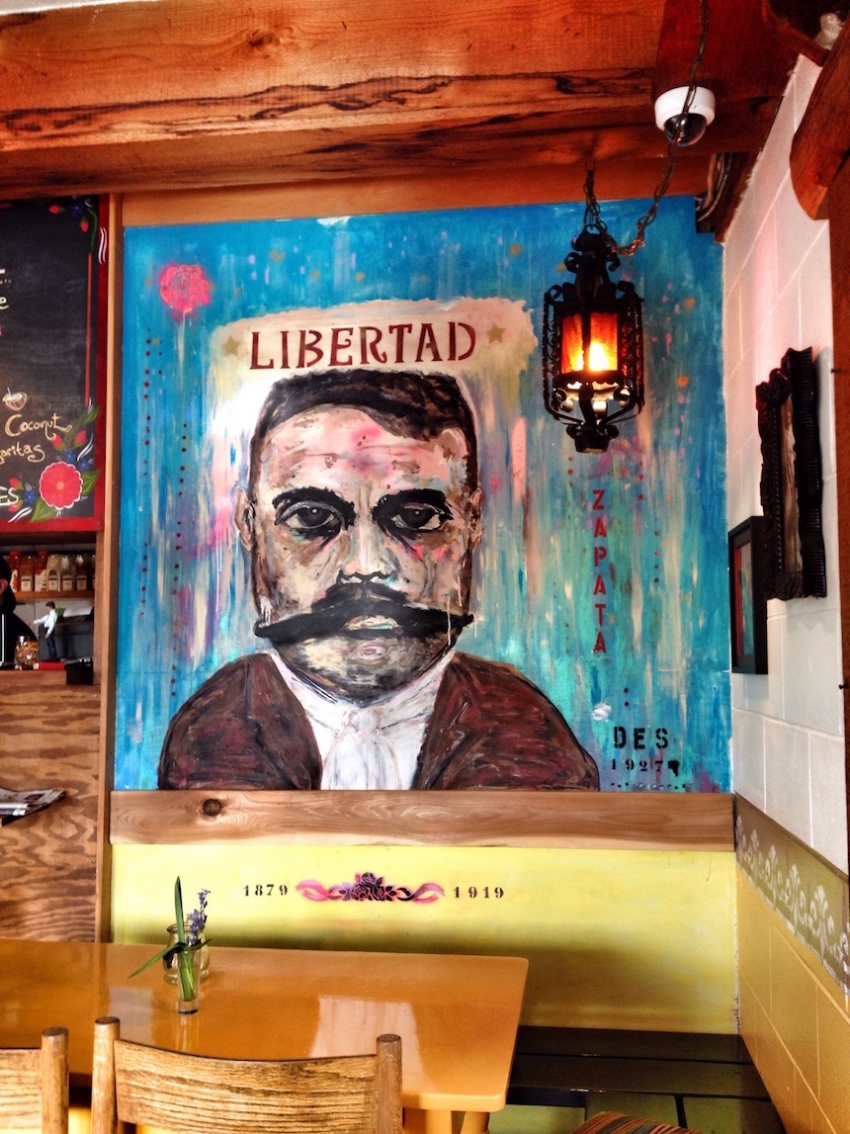 Apt exhortation, considering that the drink's active ingredient -- aside from high-octane tequila -- is hibiscus flower, purportedly aphrodisiac. We find we're not altogether immune to its action, even after 40 years of marriage.

So it makes for a muzzy morning-after awakening to pearly rainlight in our honeymoon suite at the Boxwood Cottage, in the Westview end of town. Host Diana Wood is there to meet us, with umbrellas, for a tour of the grounds. She turns out to have a few key points in common with Mei-lang, my left-brain and adult supervisor: Taiwan birth and education, plus a bright green thumb.

Except, when it comes to gardening, Diana has had extra advantages: formal academic training in horticulture (at National Taiwan University with graduate work at U.C. Davis, California's premier Ag school), as well as 25  years to embellish her three-acre Powtown playground.

It shows in the Boxwood outback -- mazes and koi ponds and bowers and gazebos. Tucked in amidst the greenery, a half dozen outbuildings -- even a treehouse -- accommodate her overflow guests, as well as her volunteer organic farming interns, during the summer high season.

While Diana and Mei-lang dote on the compost heaps and banked mulch, I wander the eponymous boxwood hedgerows, inhaling the bitter tang of incipient spring. The arched bridge at the back of the garden fords a runoff-swollen creek to access a cedar-hewn meditation platform. 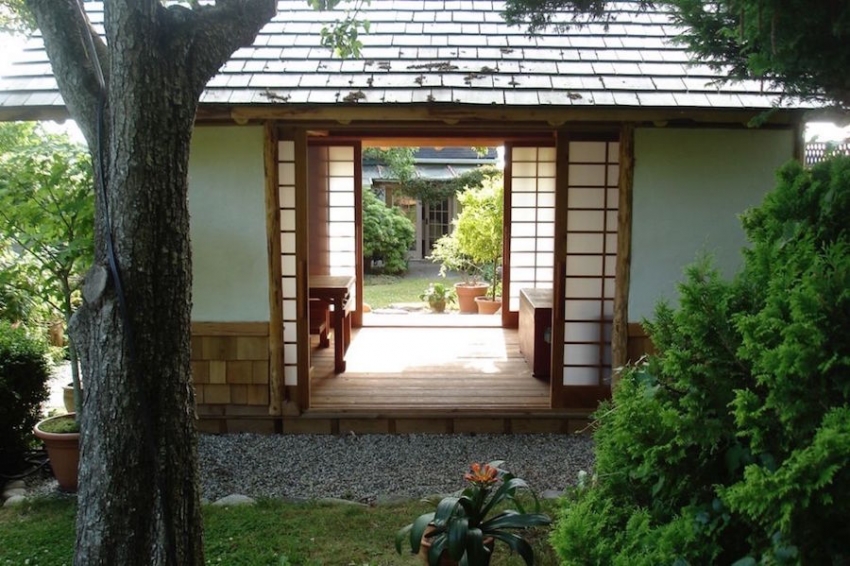 "A green thought in a green shade." Photo: Boxwood Cottage and Gardens

We reconvene at the meticulously crafted Japanese teahouse, just in time for the rain to abate. So we get directions from Diana to iconic Willingdon Beach for a mid-day stroll.

Next up: people-watching on a forested nature trail that's busy as a boulevard.