Travel series: Road tripping up the Sunshine Coast to the Powell River FilmFest.

Liz’s sanctum – once a water-taxi office – occupies about a third of the barge. The rest is festooned with burgeoning container plants and trellised arbours that have made Williams locally famous.

But we'd never heard of her when we ventured down to the Molly’s Reach café and its adjacent docks, iconic locales of CBC’s long-running “Beachcomber” series. It was the ocean-going greenery that first caught our eye. “Your garden?” we asked the elfin figure we spotted trundling a trashcan up to the wharfside dumpster.

“Yeah,” she confirmed, “but don’t look at it now. I give it a rest all winter and let it mulch until spring. This time of year I mostly stay inside and play with my artwork – if you can call it that.”

Intrigued, we asked whether we could see or buy her opus in any of Gibson’s many galleries. Not on show anywhere, she assured us, and none of it’s for sale. But she ushered us down the gangway into her charmed cubicle. 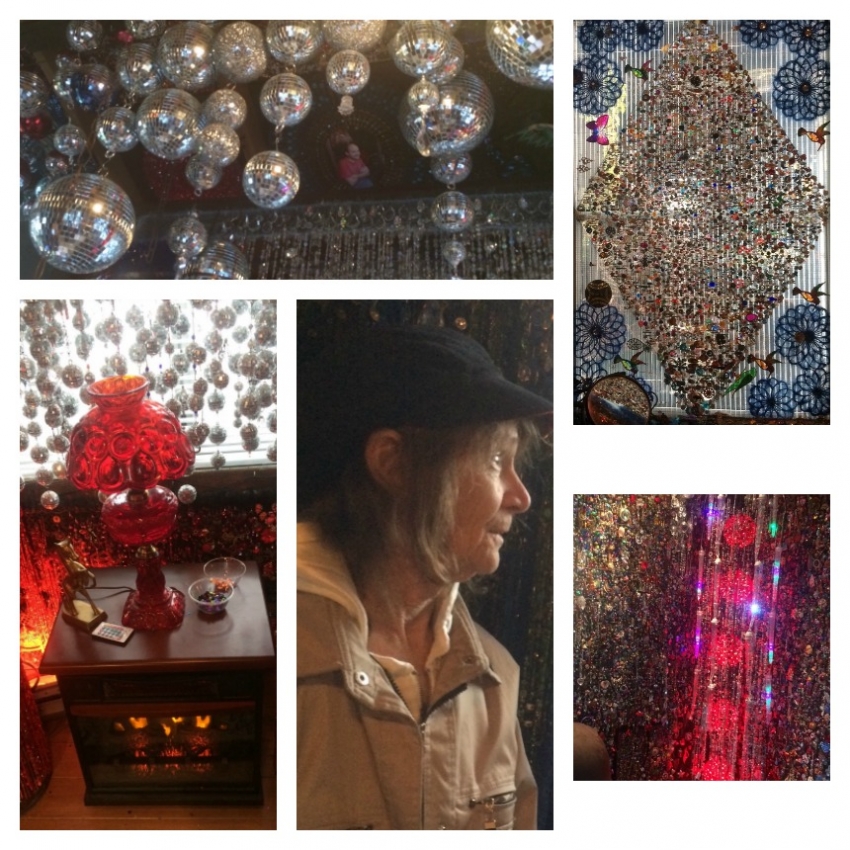 Where we remained for over an hour, transfixed by her life story: How, as a rebellious 19-year-old “Motorcycling Mama,” she’d first roared up to Gibsons (from North Van) “following a man, whom I unfortunately caught up with.”

How, on the rebound from that relationship she wound up in another liaison that lasted just long enough to leave her single-parenting her now-grown, dotingly devoted son. How she supported herself by buying a clapped out dump truck which she drove as a freelance contractor up and down the coast.

How she landed a job as a school bus driver, which lasted long enough for her to watch her “clients” grow from first-day kindergarteners into glamorous prom queens. How 20 years ago she plunged her whole (meagre) life savings into buying an old Shuswap Lake houseboat.

No sooner had she shipped it back to Gibsons than it sank straight to the bottom of the harbour. Several years and borrowed thousands of dollars later, she finally got it back afloat, with the interior lovingly refurbished by her dockside neighbour, Ray, a Quebecois master-carpenter.

And then, just days later, she was hit with a diagnosis of breast cancer, a double mastectomy and a lengthy rehab. For a while she had to work three jobs at a time to pay for all this. She’s only now finally managed to retire from the school board with enough of a pension to cover her moorage plus a few hundred left over to keep her in pasta, garden supplies and thrift-shop grist for her artwork.

“I guess I’m unsinkable after all,” she laughs.

“Now and then men – and it’s always somehow men (no offense) – urge me to sell my art to make ends meet. I tell them ‘if I sold things for money, as a customer I’d have to respect you, sir. Which I don’t.’ And then I invite them to leave.”

Children, on the other hand, are always welcome in Liz’s sanctum. “And when I tell them that they can help themselves – for free – to anything they like here, you should see their eyes bug out.” Their selections are precise, idiosyncratic, often shy and rarely greedy, she adds.

So after a stormy course, she feels herself, at age 69, securely berthed at last.  “All I could wish for now might be some grandchildren of my own,” she sighs. “Do you know any women that might be interested in a 40-something electrician living on 15 wooded acres in Madeira Park?” she enquires on behalf of her bachelor son.

But, having finally charted her brave course into this safe haven, no way is she going to let Christy Clark unmoor her. For half a decade, now, she’s been embroiled in a running controversy with the B.C. government, which wants to assess her barge as real estate on the grounds that it’s a live-aboard waterfront home, rather than actual seaworthy craft.

“It’s a boat, dammit!” she protests. “Look: It’s got an engine, a hull, a cockpit. I even took it out of the harbour to prove the point!”

Ironically, it’s left up to the town of Gibsons to enforce the assessment. And local public opinion is solidly behind Williams, as reflected in letters to the local paper and the hundreds of signatures she amassed on a petition she posted alongside the massive pink protest banner she unfurled on the wharf on Canada Day, 2013.

The case has been in abeyance ever since. But this year, Williams is warned, it could come to a head with the seizure of her boat. She’s already gearing up for another protest and petition with the onset of Gibsons’ touristic high-season this summer.

“If you ask me,” she says, “it’s just a revenue-grab. Think of all the ‘semi-retired’ watercraft, inhabited or uninhabited, up and down the B.C. coast. Wouldn’t the Province  love to get its hands on such a nice tax base! I’m just the edge of a wedge.

“But we’re not just eyesore hulks. We’re a little piece of what makes this place special. We’re culture; we’re history.”

Up next in Sunshine Coast travelogue: Hulks and History in Powell River.