“A bee sting is lucky,” he swears. That’s why beekeepers exceed any other profession in longevity, he’s convinced. (Nevertheless, he keeps anaphylactic shock kits handy for clients, just in case).

And then there’s the mysterious propolis, the most idiosyncratic bee by-product of all, inextricably linked to the terroir of its particular provenance. Renaissance master-luthiers – Stradivarius, Guarneri – valued its acoustic properties as an ingredient in violin varnish, but the formula is now lost. So is the secret whereby ancient Egyptian embalmers used it to preserve pharaonic mummies for millennia.

By the light of his cellphone, Lin picks out the currently reigning Queen in his glass-encased hive. She is distinguishable only by the slightly elongated abdomen with which she lays 1000-2000 eggs per day. Some the eggs she will fertilize with the sperm supply she’s accumulated in her once-in-a-lifetime nuptial Flight of Bliss. Fertilized eggs turn into females, either sterile Workers or (a very few) wannabe Queens.

Unfertilized eggs become male drones, thousands of them, whose sole mission in life is attempting to mate – in mid-air! – with a flying Queen at an aerial trysting site. Only 20 or so drones (per mating queen) will succeed, for which they’ll pay with their lives as she retains their gonads, guts and all. The rejected suitors hardly fare any better, either. Their Worker-sisters shove them out of the hive to starve. 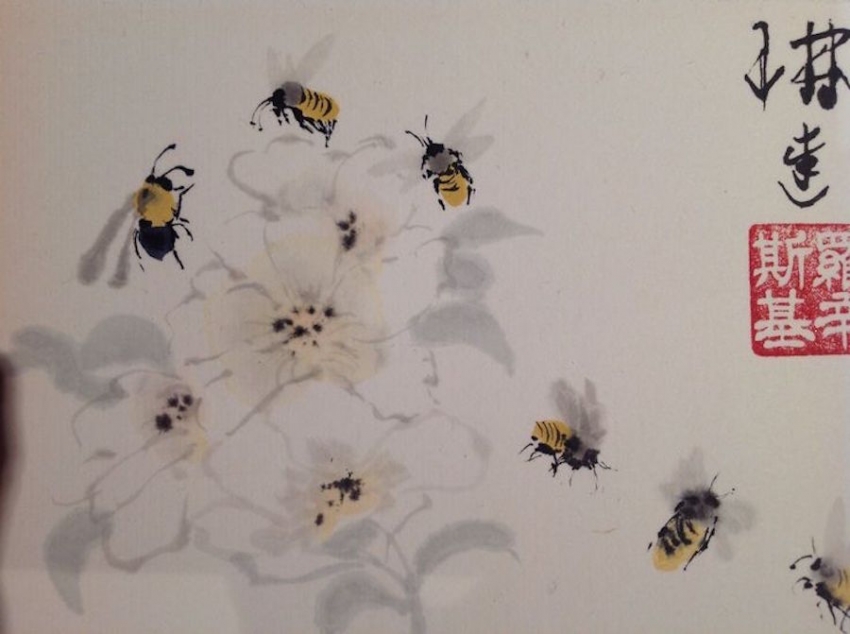 For all Lin’s evident passion for the subject, the racy polyamory of the bees strikes me as a far cry from the Protestant – almost Puritan – work ethic imputed to them in the homiletic Isaac Watts doggerel I was taught as a child.

More apt to the Honeyland scene, perhaps, is the quizzical T’ang dynasty quatrain of “Hermit Luo” (羅隱, A.D. 833-909) that Meilang learned in her Taiwan childhood: “Whether on the plains or the peaks/ Wherever you look, the same scene unfolds:/ Gleaning a hundred flowers to render their honey/ Whose is the toil, and whose the sweetness?” (不論平地與山尖，無限風光盡被占。採得百花成蜜後，為誰辛苦為誰甜).

With this matter-of-fact Chinese take on hymenoptera husbandry, no wonder the bulk of Honeyland’s market is among the Lower Mainland’s Chinese community. Lin's six-page English brochure is expanded to eight closely printed pages in its Chinese edition, replete with abstruse, hardly translatable terms from the Chinese pharmacopeia. And Doctor Bee has lately opened up new retail outlets in the Chinese enclaves of Richmond and Burnaby.

But there's more at play here than business-savvy niche-marketing, we come to realize in Lin's rhapsodies about the subtleties of the hive mind and the intricate symbiosis of bees, plants and humans. It’s overly simplistic to read the Hermit Luo quatrain as a straight-up parable of exploitation between the "castes" of the hive or the bees and their human beekeepers.

Who toils? Each buzzing, bustling little dab of protoplasm in the colony, from Queen to drone.

And for whose sweetness? Why, that of the collective hive as a whole, Lin assures us. The entire colony is an exquisitely adapted “super-organism” that far transcends the sum of its individual monads.

But that long-evolved super-being is now threatened with colony collapse; apiculture trends and practices could make or break it in the next few decades. And a world without bees would be a world without burgeoning summer, but rather a perennial, blistering, shadowless autumn.

So go out to Pitt Meadows and taste what's left of this bee-glad summer while you still can. This weekend, Honeyland throws open its doors for a two-day “Bees and Blueberries” Festival.

There will be clowns and games, pie- and ice cream-eating contests, rockabilly crooners and kiddie beauty queens. Don't miss the tours, demo's and mini-seminars.

For the intrepid, there could even be a chance to grow a “bee beard.” What better way to get close and personal with a “super-organism?”

If you’re “lucky,” you might even be favoured with a sting or two.