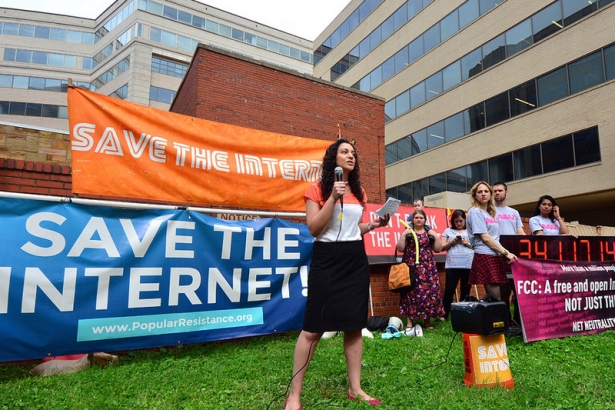 On May 15, millions spoke out online while hundreds gathered outside the FCC in Washington DC to say no to the Internet slow lane.

Yesterday morning U.S. FCC Chair Tom Wheeler announced that his agency voted in favor of a plan that could allow the creation of a slow lane on the Internet. This could force everyone except those with deep pockets (think: big conglomerates) into a second-tier of service that could slow their content to a crawl.

However, there is a silver lining in yesterday’s decision: Under huge pressure from millions of outraged citizens, Wheeler changed the FCC’s proposal from one that only considered the creation of an Internet slow lane, to one that also opens the door to a popular common sense alternative: a free and open online highway.

Unfortunately, there’s a long way to go to make that open online highway a reality, but we can get there. Although yesterday’s proposed rules have been approved by the FCC for consideration, they now have to endure up to 120 days of public scrutiny. So what does this mean for the Internet freedom movement?

It means the battle for the Open Internet has only just begun: Rallying the public around rules that create a free and open online highway is crucial to the future of the Internet.

Let’s look at how we got here: yesterday’s proposal comes in response to the striking down of crucial open Internet rules by a U.S. Federal Court in January. With these rules no longer in place, the FCC began work to create a new framework for how traffic is treated online.

This framework was announced yesterday morning in Washington, D.C, following weeks of speculation about how they could undermine the Internet as a level playing field. Millions of concerned citizens, dozens of leading tech companies, and major investors all voiced strong concerns about how the FCC’s decision could hand control over what we do online to giant telecom conglomerates.

There are at least three major lessons we can learn from yesterday’s announcement:

First, our huge citizen-backed movement is really making a difference: Due to massive public pressure the FCC pulled back fully endorsing Big Telecom's slow lane plan. Rallying the public around the possibility of an open online highway (i.e., reclassification) is our most important task going forward. Without this, the Internet as we know it may never look the same again.

Second, the FCC has a very long way to go in balancing the public interest with those of a handful of outdated telecom conglomerates. Rather than doing the right thing and throwing out Big Telecom’s slow lane plan, they have left the door open for it and other rules that would gut the Internet to succeed. Again, it is crucial that we work together to show the FCC that an authentically open Internet is their only option.

And third, the next four months are crucial. There is now a public consultation period of 120 days for citizens everywhere to make it clear that we want Open Internet rules. Hordes of lobbyists employed by Big Telecom have already gone to work on undermining our efforts in a last-ditch attempt to turn the Internet into something that looks a lot more like this century’s cable TV. They will be out in force so we have to keep the pressure on decision-makers at the FCC.

In short, we have held off the slow lane plan for now, but we are in limbo until the FCC formally withdraws the plan and reins in Big Telecom’s attempts to control our Internet. In the meantime, a crucial 4 months lay ahead of us, and we have to do everything in our power to convince the FCC to do the right thing and throw away the plan for an Internet slow lane.

How can you help? If you haven’t already, make sure you join over 100,000 people and say no to the Internet slow lane.