"You've Got Time" (Regina Spektor): Opening theme for "Orange is the New Black"

Emboldened by "Game of Thrones" and "Breaking Bad", I now dare to recap "Orange is the New Black", a show with which I fell in love instantaneously.

OITNB premiered in its entirety on Netflix in July. In keeping with that format, I'm recapping the entire season in one go. Fans of "Orange is the New Black" have been watching it at different speeds (Single episodes now and then? Binges?), so feel free to stop reading once you reach the end of the episodes you've already watched.

Some of the numerous side plots will be left behind, but I'll pick a few back in the "Orange is the New Black" Season 1 review.

Also, I'm ignoring Larry's storyline except for when absolutely necessary. No disrespect to Jason Biggs, who knocks the role out of the park, but we can all agree that Larry's is the least compelling storyline. An entire season's worth of spoilers lay ahead. Got it? Okay, let's get started.

Piper Chapman is a middle-class blonde, early thirties, engaged to a struggling writer named Larry Bloom. We catch up with Piper as she's about to voluntarily begin a 15-month prison sentence for her role as a money-launderer in an international drug-trafficking operation. Ten years earlier, Piper had taken up with a sexy and mysterious woman named Alex Vause, and ended up moving large amounts of cash across borders for her new lover (and that lover's druglord boss).

She may have sworn off women and crime, but the past has caught up with Pipes, and payback is a bitch in the land of the War on Drugs.

Piper's fiance Larry's dad acted as her lawyer, advising her to take a plea bargain, so here we are: an awkward goodbye in the prison intake area, with both Piper and Larry promising to keep their relationship together. This is also where Piper stops being Piper and begins the involuntary change into Chapman as she leaves the world she knows behind.

Chapman enters prison completely unprepared, despite having read a few books on the subject (a meta-nod to the show's source material, Piper Kerman's memoir). Along with the indignities of intake (the strip-searches, the public showers), she finds unexpected moral support from van driver Morello, easily the most adorable inmate on the face of the Earth. 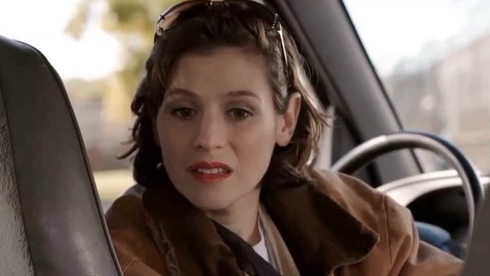 During her first meal, having found a place to sit in the Litchfield cafeteria, Chapman disses the food, as is, she presumes, the custom. Uh-oh: turns out the Russian lady with the red dye-job not only runs the kitchen, but pretty much the entire social structure.

Red responds to the slight by serving Chapman a bloody tampon during the next meal, followed by a scorched-earth campaign. See, this is the horror of prison for Chapman: it ain't like in "Oz", where everybody's getting shivved every ten seconds. No, there's mainly a lot of boredom and silence, and then you break some rule you didn't know about, and then the other inmates share a look you don't understand, and, boom, you're getting punished.

For the next two weeks, Chapman is basically starved, and nobody will help her for fear of suffering Red's wrath.

Fortunately, we get into Red's back-story sooner rather than later. Red, as we find out, was the co-owner of a little grocery store in Brighton Beach, Brooklyn's main Russian neighborhood. Accidentally popping the fake breast of one of the Russian mob's bottle-blonde trophy wives sucked her and her husband into debt to the wrong sorts of people.

Chapman digs herself out of her first prison mess by calling upon an unlikely skill: the ability to prepare artisanal body lotions. She does so with the help of trans hairdresser Sophie and crazy-eyed Crazy Eyes, who claims Chapman as her "wife". As you may have guessed, Crazy Eyes did not get her nickname by being stark raving sane.